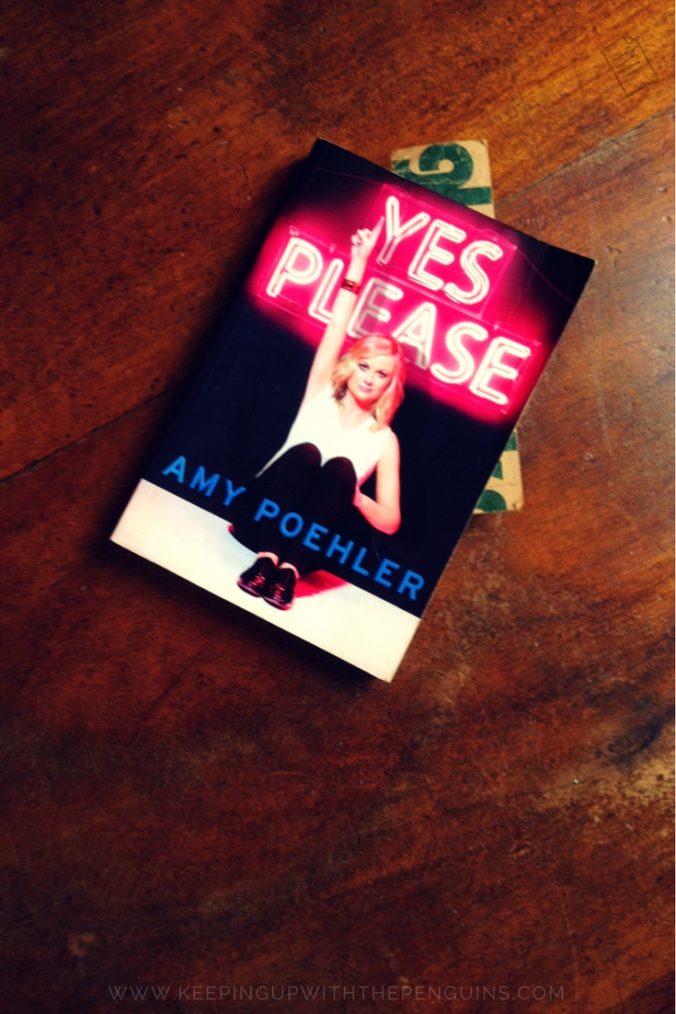 I thought I had no chance of coming across a copy of Yes Please by Amy Poehler for under $10 (my self-imposed book budget for this project), after Saturday Night Live’s popularity boom during the last U.S. election. And yet, I managed to snatch it – for the right price – right from the window of my favourite bookstore. Is there any better feeling?

Yes Please is the memoir of the American actress/comedian/television writer Amy Poehler, released in 2014. In terms of accolades, it was nominated for a Grammy – of all things – for Best Spoken Word Album. It seems fitting for a celebrity who has hedged her brand on her reputation for not playing by the rules.

I expected to love it. After all, I loved Bossypants, written by Poehler’s work wife Tina Fey. I love books by strong, funny, honest women. I love memoirs. Right from the outset, it ticked all of the right boxes. I had read that it was received with mixed reviews upon release – critics liked some parts and hated others, apparently. But isn’t that just life? I had high hopes.

In reality, Yes Please didn’t feel as much like reading as it did An ExperienceTM. It’s more of a scrapbook than a memoir; there’s full-colour photographs and letters from friends and extracts from television scripts. There’s no cohesive narrative, it’s a series of essays and letters and anecdotes plucked from the life of a famous person.

Sometimes, I chuckled. Sometimes, it seemed a bit self-help-y. Sometimes, Poehler made a really good point. Sometimes, she name-dropped a probably-famous person, but I didn’t know of them so it went right over my head. It was a mixed bag, really.

The thing is, I’ve never watched SNL, save for the grabs that make the evening news when Alec Baldwin does a funny Trump impression. I had to stop a few times to jump on YouTube and find a clip she described. My personal favourite was a heavily-pregnant Poehler delivering a rap on behalf of Sarah Palin.

Still, those stolen moments weren’t enough to allow me to immerse myself in the book itself. The parts about SNL and about improv troupes and about Parks and Recreation were really written for readers that wanted a backstage pass to the films and television shows that they already love. Some knowledge of Amy Poehler, and her career (especially on SNL), and comedy/theater/television more broadly is definitely required in order to enjoy Yes Please properly.

(At least, that’s what I tell myself, rather than face the equally-likely reality that I am just a dimwit who couldn’t follow along.)

I wanted to know what Poehler thought about life, about men, about feminism, about marriage, about human nature… Really, the only piece of Poehler’s work with which I was deeply familiar prior to reading Yes Please was her bit-part in Mean Girls, and that didn’t even rate a mention!

The one part of Yes Please I really connected with was her “Plain Girl vs The Demon” essay. Poehler managed to articulate something very important about women getting to decide their currency in the world, emphasising that it’s okay if looks aren’t it. That’s not a message that women hear very often, and it sloshed around in my head for a while.

I also applauded Poehler’s lack of gratitude-gushing, and her refusal to feed the reader any crap about “luck”. She’s very frank and forthright about how her own hard work got her to where she is today. There was no magical coincidence that tossed her into the lap of an SNL director and shot her off to stardom. She expresses an appropriate amount of gratitude to the people she knew who helped her along the way, of course, but make no bones about it: Poehler’s here to tell you she made it to the top on the sweat of her own brow.

I occasionally laughed out loud, which is normally a good sign, but ten minutes later I couldn’t remember the joke. Either I’m getting old, or Yes Please just didn’t resonate with me. It felt like Poehler and I were buzzing on different frequencies.

I think Amy Poehler is wise and wonderful and honest and smart. I didn’t love her book, but her book is not her. I don’t think she needs me to love Yes Please, and I don’t think that not loving it makes me a troll or a hater. It’s a book for people who love her work, really; I doubt it would lead a true troll or hater to change their minds. As she says in her introduction, “writing is hard” – my hat still goes off to her.

7 Books You Can Read Over and Over Again