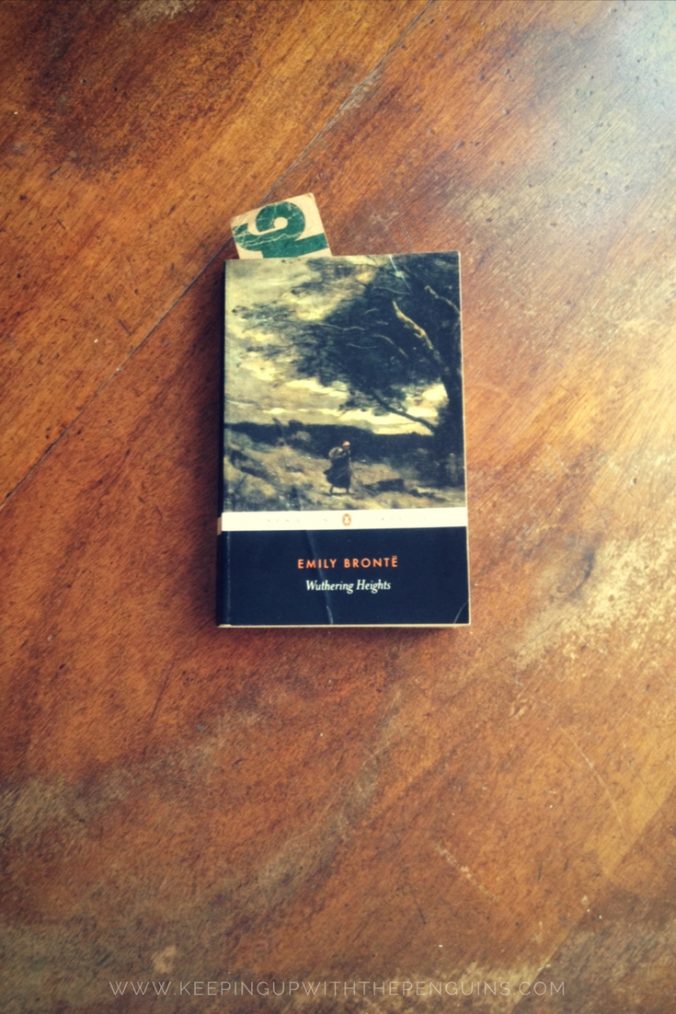 Wuthering Heights has been reviewed and critiqued approximately eighty billion times already. My secondhand copy (purchased for $10, once owned by but never borrowed from the library of Riverside Girls’ High, according to the stamp in the front) has a Preface, Chronology, Introduction, Further Reading List (pages!), a Note on the Text, a Genealogical Table, a Bibliographical Notice for the author, and an Editors Preface to the New [1850] Edition… not to mention that the text itself is followed by 13 pages of notes. How can I possibly add to an analysis that’s already longer than the book? I’ll give it a shot, but I’m not optimistic…

(A hot tip for those of you yet to read Wuthering Heights: given how many characters Emily Brontë names for their parents, and how many of them marry their cousins, an edition with the aforementioned Genealogical Table in the front is really handy!)

So, it’s 1801, right. This moody guy, Heathcliff, lives with his daughter-in-law and her new husband (his own son having perished, at some point). The DIL is hot, but they’re all kind of rude and weird. Their kindly neighbour – who’s trying to narrate this mess – comes to have a sleepover, but they stick him in a really strange room and he has nutty dreams and sees a ghost. He bails quick smart.

Then, presto, we kind of switch narrators, because that kindly neighbour – safe, back at his place – gets bored at dinner and makes his housemaid give him all the dirt on those weirdos up the road. So, it’s the narrator narrating the narration of his housemaid. Got it?

It turns out: that Heathcliff guy was once a ruffian street-kid, with a Cinderella-esque upbringing (once the dude who took him in died, the rest of the family started being really mean). Catherine (we’ll call her Cathy Senior for clarity – you’ll see why in a minute) was a saucy little minx, who flirtatiously tortured Heathcliff for years, but she ultimately decided to marry the snooty guy next door instead. It was a hella dramatic household – years of drunken rages and fights and marriage proposals and death. It’s great tea, but damn, I wanted to tell them all to just calm down for a minute.

Heathcliff went on a sulky walkabout after his true-love-slash-adopted-sister married the snooty guy. Cathy Senior is overjoyed when he eventually returns, which makes Mr Snooty super jealous. Then, Mr Snooty’s sister takes a fancy to Heathcliff, and Cathy Senior is so not jealous of them that she goes properly bonkers and locks herself in her room.

Heathcliff does actually take Mr Snooty’s sister for a wife (seemingly because they both just fancied a shag and this was the only way to get one back then), but being back living with the adopted family that hates him isn’t great for his mental health. Guys, this is just Volume I. Strap in!

In Volume II, Heathcliff decides he doesn’t give a damn who’s married whom, and sneaks in to see Cathy Senior while Mr Snooty is at church. They pash for a bit, but she’s still bonkers, and Mr Snooty ends up catching them at it. It turns out Cathy Senior was knocked up (though none of them have mentioned it up until now) – the shock of the whole situation sends her into pre-term labour, and she dies not long after the shorty drops.

This, in turn, makes Heathcliff even more mental (losing his true-love-slash-adopted-sister and all), so Mr Snooty’s sister leaves him… but it turns out she was knocked up as well (gasp!). She runs away to the country to have the kid and eat a lot of peaches… then the story jumps ahead 13 years, and she dies too. I’m serious! I’m not making this up, I swear.

Cathy Junior (yes, Brontë named both characters Cathy, it’s crazy) is a mad little scamp; she thinks her cousins are living far, far away… but it turns out they’re living up the road with Heathcliff, and when she finds out she gets very pissed off. She becomes secret pen pals with Heathcliff’s son and they trade notes via the milkman for a few days, until they decide they’ve fallen in love.

(It kind of seems like deciding you want to marry the guy you’ve been messaging on Tinder for a few days… only that guy is your cousin and living with your mother’s ex-lover and it’s all really fucked up!)

Heathcliff isn’t at all bothered by the incest, and approves of the match. He’s so determined that Cathy Junior should marry his son that he takes her hostage, knocks her around a bit, and tells her that he won’t release her to see her dying dad until she’s got a ring on it. The whole thing is a study in Stockholm syndrome and domestic violence, and by all rights I should have been shocked and confronted… but I was so confused and bored by their melodramatics that it passed by me with barely an eyebrow raised.

To skip ahead to the end (which I’m sure we’re all eager to do by this point): Heathcliff dies and the implication seems to be that he and Cathy Senior go on to have a rollicking good time in the afterlife, haunting the moors and so forth. Cathy Junior outlives her cousin-husband, and eventually falls in love with her other cousin (even though he’s really stupid). They… live happily ever after? I guess?

I can see why Wuthering Heights has been loved and labored over for so many years – there’s clearly layers of metaphor and hidden meaning, but (unlike Mrs Dalloway) that doesn’t mean that a surface reading isn’t perfectly enjoyable. Of course, you’ve got to keep track of all the love dodecahedrons and set aside any qualms you have about incest…

The thing is, while I was reading Wuthering Heights, I was having a pretty tough time personally – putting on pants in the morning was about all I could manage, let alone immersing myself in Brontë’s madness. I’ll definitely read this book again, not because the first time was so good, but because I could not possibly have got everything out of Wuthering Heights that it has to offer, when so much of my brain space was occupied with other things. Ergo, at this point, I can really only recommend it to someone who’s got the emotional and mental stability to enjoy it properly.

Tl;dr? Wuthering Heights is a bad boy’s decade-long butthurt over getting friendzoned. If that appeals to you, and you don’t have any emotional turmoil of your own going on, go for it.

If all you knew about Wuthering Heights before you read this review was drawn from the Kate Bush song, don’t worry – you’re not alone! Check out more songs inspired by classic literature here.

Describe A Book In A Single Sentence