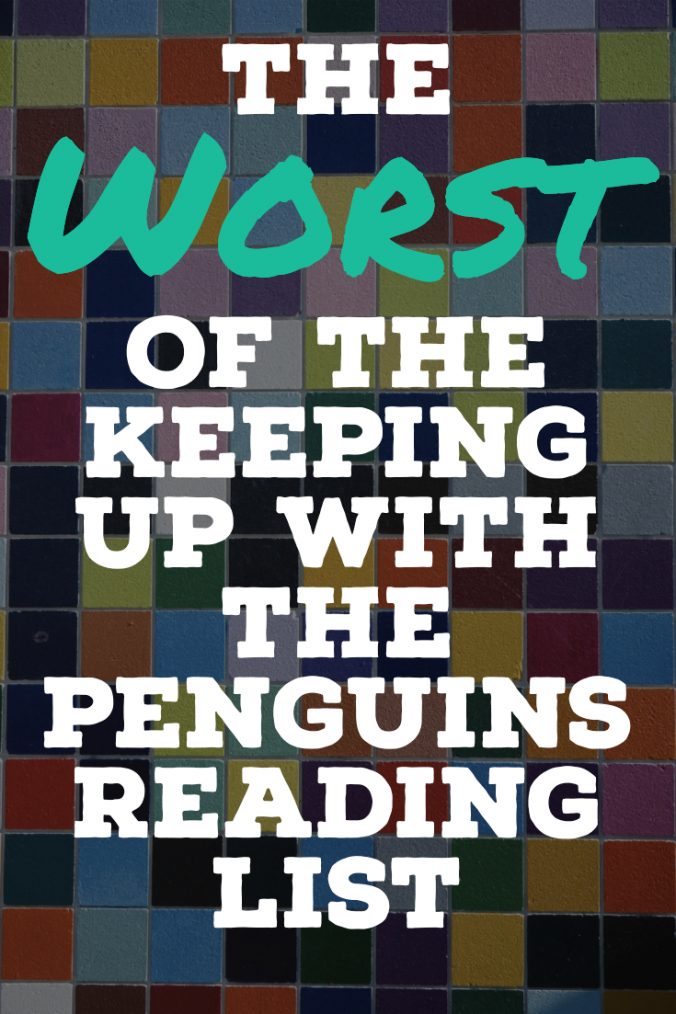 Worst Of The Keeping Up With The Penguins Reading List

I think I might be the only person alive who didn’t have to read this book in high-school. I’m not sure how that happened, but it did, which meant I came to The Great Gatsby for Keeping Up With The Penguins with a weight of expectation. It’s the “definitive Jazz Age novel”, a “beautiful” story about the “decline of the American Dream”… hooey! Nick Carraway thinks he’s the first person to discover that it’s fun to drink and party with pretty girls. Owning a fancy fast car will come back to bite you in the arse. Blah, blah, blah. I fail to understand why this is a staple on every high-school English syllabus when there are other great books out there that would offer much better insight (and would be way more fun to read, into the bargain). Read my full review of The Great Gatsby here.

When I think back to Divergent, there are two things I remember (neither of them flattering). The first is that it felt like Veronica Roth just took the idea of the sorting into Houses from Harry Potter, mixed it with the teen girl protagonist who has to save the world from The Hunger Games, and spat out the flimsiest house-of-cards excuse for a dystopia in the history of fiction. The second thing I remember is the single worst sentence I encountered in this entire project: “I watch the light leave Will’s eyes, which are pale green, like celery”. (Or maybe I should say it was the best sentence I encountered, because it made me snort so hard my nose still hurts.) I do not recommend this book, not even for the teenager in your life that’s teetering on the edge of becoming angsty. Read my full review of Divergent here.

The Golden Bowl by Henry James

I’m a dirty finisher. A completionist. I hate to put a book down before I’ve turned the final page (and I certainly can’t bring myself to review a book I haven’t finished reading). The Golden Bowl put all that to the test. I can’t recall another instance where I came so close to abandoning a book in this entire project. I hated it! The Turn Of The Screw wasn’t so bad, and as far as plot goes, The Golden Bowl’s is alright (a love quadrangle complete with extramarital affairs and step-parents)… but DAMN, James needed to CALM DOWN. To say that his writing is dense would be the understatement of the century. It was basically impenetrable – I had to resort to looking up chapter summaries online just to figure out what the fuck he was trying to say with ALL THOSE WORDS and ALL THOSE COMMAS. Henry James and I are done. Finished. Kaput. On pure principle, I will never pick up another book of his as long as I live. Read my full review of The Golden Bowl here.

The Fault In Our Stars by John Green

It might seem strange that I’m including The Fault In Our Stars here, given that I’ve certainly referenced elsewhere as a book you should read before you die. I stand by that: so many teens have read and fallen in love with this book, I don’t doubt that many of them will end up paramedics, doctors, and palliative care nurses as a result. But let’s be clear: that’s the only reason to read this book, as far as I can tell. I want to have something to talk about with the doctor or nurse that takes care of me in a nursing home someday. As for the book itself? Trite nonsense, transparently designed to try and pull on my heartstrings. The “love interest”, Augustus? He was such a pretentious cockwomble! “Oh, I put cigarettes in my mouth but never light them because it’s a metaphor!” = get in the fucking bin, mate. Read my full review of The Fault In Our Stars here.

The Call Of The Wild by Jack London

Whenever I see The Call Of The Wild shelved in the children’s section of any bookstore, I leave immediately. To call this a “children’s book” is the most sick, twisted, fucked-up thing I can imagine. I thought it was going to be the story of a dog who went camping in the woods. Do you know what I got? Dog-napping and death. Seriously! Humans killing dogs. Dogs killing humans. Dogs killing each other. I couldn’t stand it! I don’t care if all the trauma was interspersed with beautiful place writing about the Klondike, I don’t care if Jack London had some grand point to make about humanity and nature: this book was traumatic in the extreme and I would strongly urge any dog-lover (really, any person with a feeling bone and a beating heart in their bodies) to STAY AWAY from it, for their own good. Read my full review of The Call Of The Wild here.

You know, as far as 18th century novels go, Gulliver’s Travels wasn’t bad. It was certainly more readable than Robinson Crusoe or The Life And Opinions of Tristram Shandy, Gentleman. I could totally get behind some of Swift’s sociopolitical commentary: the ridiculousness of the Lilliputians at war over the correct way to crack an egg was genius. The thing is, I just could not get past what an absolute arsehole Gulliver was to his wife. Seriously! He just keeps gallivanting off on these doomed adventures, leaving her at home alone raising their kids for years at a time, never knowing whether she’ll ever see him again, whether he’s even alive or dead. Then, when he does come home for good, do you know what he does? He tells her she smells (I’m not being facetious, literally her odor was now “offensive” to him), and spends the rest of his life living in the stables, ankle-deep in horse shit. Occasionally, he’ll deign to dine with her, as long as she sits at the other end of the table and doesn’t speak too much. Gulliver is a dickwad, and I care not a dot for his stupid travels, thank you very much. Read my full review of Gulliver’s Travels here.

American Sniper, where to start? Whenever I share my feelings about this book, someone somewhere pops up to smack me down for them. Chris Kyle was a “true patriot”, apparently, and I’m “disrespecting his sacrifice” by calling his book a steaming turd. But you know what? I stand by that description (though it may be a little too kind). It’s not just that it was badly written – it really was, even with two ghost writers on the payroll. It’s that the worldview it espoused was horrific. Kyle was the “most lethal sniper” in the history of the U.S. military, and it would seem that he became that way by developing a sickening obsession with guns and violence from a very early age, and unquestioningly accepting the propaganda of American cultural imperialism. He never once conceded that he was shooting actual human beings in Iraq: they were reduced to “targets”, “bad guys”, “savages”, “motherfuckers”. He actually said, with pride, that he “didn’t shoot everyone holding a Koran – he’d like to, but he didn’t”. I’d shelve this book next to Mein Kampf, and any other manifesto written to inspire hatred. I’m not sure I could even justify recommending it under the guise of “know your enemy”. Read my full review of American Sniper here.


Whew! That was cathartic! What do you reckon – have I been too harsh? Are there any I should give a second chance? Or are there some huge stinkers I’ve missed? Let me know in the comments below!

The Love That Remains – Susan Francis