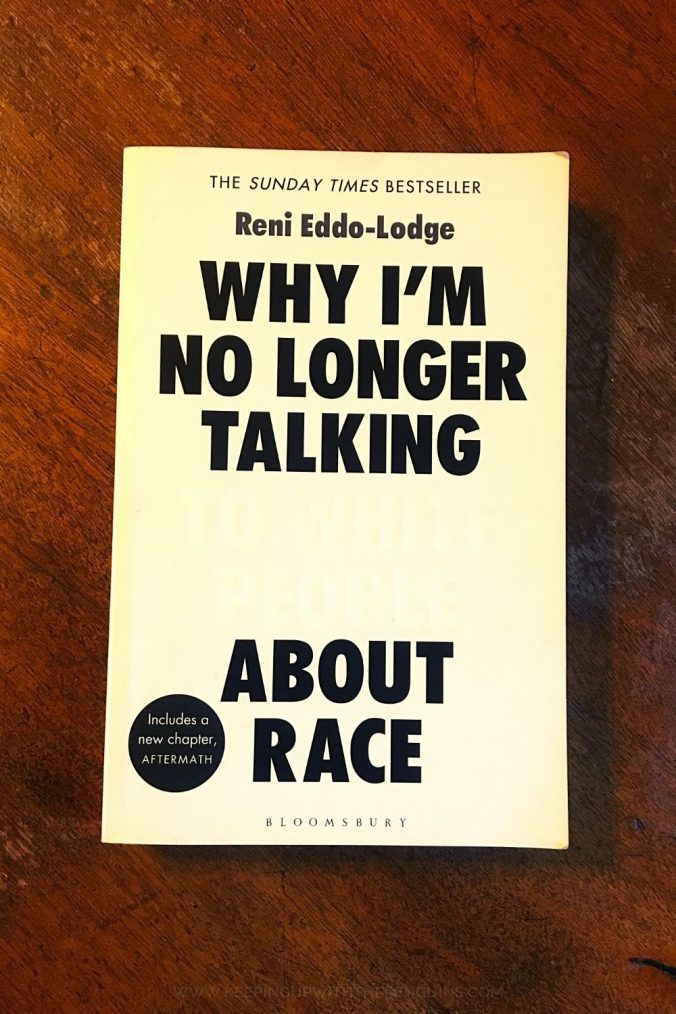 You know I love a good provocative title, and Why I’m No Longer Talking To White People About Race has to be one of the best of recent years. It caused a bit of a stir when it was first published back in 2017, and whipped up into peaks again this year with the spike in sales of racial justice books after worldwide #BlackLivesMatter protests. The cover maximises the impact, using colour and texture to obscure “to white people” until you take a closer look. Aside from any of the book’s contents, my hat goes off to Reni Eddo-Lodge and the team at Bloomsbury for this master stroke!

Alright, enough judging a book by its cover! Why I’m No Longer Talking To White People About Race is Eddo-Lodge’s first book. It started with her blog post of the same name that she published back in 2014, but there’s no need to go trawling the internet for it: Eddo-Lodge reproduces it in full in the preface. It serves as a thesis statement, framing and contextualising everything that is to follow.

So, the $64,000 question: why isn’t Eddo-Lodge talking to white people about race? Well, basically, she’s fed up: with white denial, with white self-flagellation, with trying to shake hands with a brick wall. “The journey towards understanding structural racism still requires people of colour to prioritise white feelings,” she says, and it’s bloody exhausting. Of course, the title expresses that feeling in short-hand; she’s no longer talking to white people who refuse to meet her on the same ground, who refuse to acknowledge the facts, who don’t come to the conversation with open hearts and minds, about race. After all, if she’s constantly called on to be empathetic and to assume the best in others, even those who offend and anger her, why shouldn’t she hold her interlocutors to the same standard?

Of course, the paradoxical effect of publishing the Why I’m No Longer Talking To White People About Race blog post – and, later, book – is that it caused her to spend quite a bit of time talking to a lot of white people about race. She has met every reaction, from glowing admiration to gushing apologies to gross aggression. Eddo-Lodge is an award-winning journalist, and she went out on quite a limb in phrasing and publishing her thoughts this way – she even calls out a number of her colleagues (by name!) from The Guardian and other outlets. She’s not pulling her punches!

A disclaimer: I am reading Why I’m No Longer Talking To White People About Race as one of the titular white people, in the broadest sense – a white person who had an interest in racial justice long before it became a 2020 buzzword (thank you, undergrad sociology classes!) but white nonetheless, with all that it entails. So, you really should take that into account in reading my summary and response to Eddo-Lodge’s ideas here – and I urge you to purchase and read her book for yourself rather than relying on my understanding of it.

As per the blurb, Why I’m No Longer Talking To White People About Race “explor[es] everything from eradicated black history to the inextricable link between class and race”. It is “the essential handbook for anyone who wants to understand race relations in Britain today”. Naturally, her ideas are formed and focused on Britain (as you’d expect, given how much she draws from her lived experience and her education in that country), but the points that she makes are certainly transferable to colonies like Australia.

She begins with an examination of black British history, from the colonial slave trade to the riots and reforms of the 20th century, with particular attention to how blackness came to be associated with criminality. It’s truly fascinating, and I would have read a whole book of her work on that subject alone – one that has, I suspect, too long lived in the shadow of American race history. Although the history Eddo-Lodge describes is awful and terrible and infuriating, it’s also an incredible testament to the resilience, strength, and courage of black British people.

Much of the subsequent discussion in Why I’m No Longer Talking To White People About Race circles around definitions: how we define race, how we define class, how we define feminism, and who those definitions include/exclude. I wanted to imprint many paragraphs on my brain, memorise them to whip out later when I unwittingly find myself in conversation with a racist-who-doesn’t-think-they’re-racist (the worst kind, in my view). Racism is not personal prejudice (“I don’t like X because they’re black”), it is broad discrimination plus the power to affect the lives of the targeted group – it’s the collective effect of bias over time. Racism is to be found in systems and structures that operate to keep people of colour out. “We tell ourselves that racism is about moral values,” Eddo-Lodge says on page 64, “when instead it is about the survival strategy of systemic power.”

The chapter “What Is White Privilege”, I assume, is the most contentious. Eddo-Lodge answers the question directly on page 86: “White privilege is an absence of the negative consequences of racism. An absence of structural discrimination, an absence of your race being viewed as a problem first and foremost…”. The term pisses (some) white people off, presumably because it de-centers them, reminding them that their experience is not universal. White privilege does not mean that a white person has not struggled, has not faced hardship, but it does mean that the colour of their skin hasn’t had a significant negative impact on the trajectory of their life.

Eddo-Lodge acknowledges and explains the complexities of this term in a frank and (in my view) unassailable way. She goes as far as to break her own titular resolution, to no longer talk to white people about race, seeking out white people to interview about – among other things – white privilege, and what it takes to overcome the reflective urge to defend whiteness when it is criticised.

Why I’m No Longer Talking To White People About Race was relatively successful upon its initial release, but following the killing of George Floyd earlier this year, it reached stratospheric new heights of success. It became the first book by a black British author to reach number 1 on the UK’s top 50 book sales chart. It has been endorsed by notable black writers, including Marlon James (who said that it was “essential” and “begging to be written”), and Bernadine Evaristo (winner of last year’s Booker Prize, who likened it to Roxane Gay’s Bad Feminist).

I would really love to give Why I’m No Longer Talking To White People About Race a blanket recommendation as a catch-all universally-accessible masterwork of white consciousness-raising. However, I can’t imagine people deeply entrenched in systemic racism, to the point of defending it, picking this book up and learning from it. Why I’m No Longer Talking To White People About Race is not a primer, it’s not a for-beginner’s guide to racism. I would recommend it only to readers who are ready and willing to meet and understand Eddo-Lodge on her terms. If this is your first foray into trying to better understand issues of race and racial justice, keep this one on hand for when you’ve got the basics down, then give it a go.

My favourite Amazon reviews of Why I’m No Longer Talking To White People About Race:

The Law Of Innocence – Michael Connelly

Best Selling Books On Racism in 2020