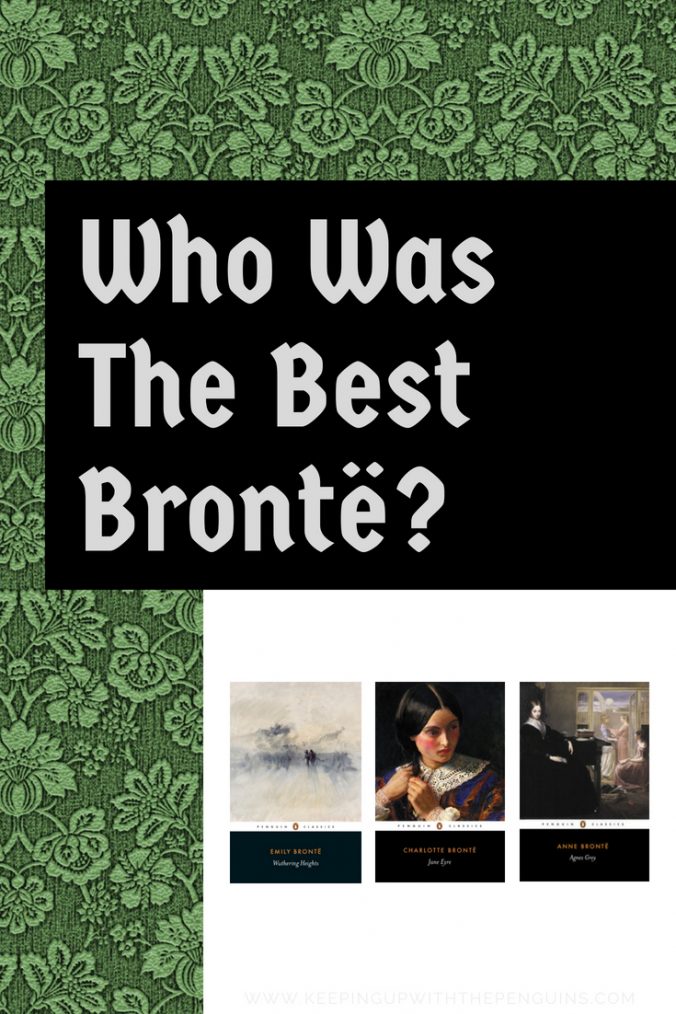 Now and then you get a random cluster of super-successful people, all from the same family. There’s multiple household names on these particular family trees, recognisable the world over. In the 1980s, it was all about the Jacksons. The ’90s and ’00s had the Baldwins and the Wayans and the Arquettes. Today, you’ve probably got a favourite Hemsworth or Gyllenhaal or Franco. But back in the 19th century, they had the Brontës.

Who Were The Brontës?

(OK, maybe there was a bit of sex… unprotected sex, apparently.)

To accommodate the expanding brood, Patrick moved his family to the village of Haworth, West Yorkshire. Even though the town’s population had grown exponentially in recent years, there was no sewerage or sanitary systems. The water supply was constantly contaminated by the rotting corpses in the cemetery up the hill (D-minus for the town planner). Food was scarce, and everyone survived (barely) on a steady diet of porridge and potatoes. Life expectancy for residents was around 25 years, and infant mortality was nearly half, so getting all of the Brontës up past knee height was a pretty significant accomplishment.

Unfortunately, even though the kids held up alright, their mother didn’t fare so well, and she died the following year. Her sister moved in with Patrick shortly after to help with running the house, but he needed a bit of peace and quiet (or a better education for the rugrats, or both). He found the kids places at a reputable charitable school not far away. Of course, even “reputable” charitable schools in those days had pupils so malnourished that they lost their eyesight, and rats would gnaw on their extremities at night, so it’s all relative.

Sure enough, the Brontës started dropping like flies. By 1825, both Maria and Elizabeth (the two eldest) were dead from illnesses contracted at school. Patrick got fed up with his kids dying, so he brought the remaining ones back home pronto.

Having suffered stoically through all that death and porridge, now finding themselves quite alone in the middle of nowhere, the remaining Brontë sprogs – Charlotte, Emily, Branwell, and Anne – took to making up stories for their own entertainment. They created the fictional worlds of Angria and Gondal, writing stories and poems and feeding off one another’s creativity. In fact, they wrote more as children than any of them managed as adults. Just goes to show what lengths kids would go to keep from getting bored when they don’t have iPads.

In 1846, Charlotte, Emily and Anne had a collection of poems published under their pen names (Currer, Ellis, and Acton Bell). Branwell was making a pest of himself (more on that in a second), and contributed very little to their literary efforts from that point onward. Their isolation meant that the Brontës created their own kind of literary tradition – relatively untouched by the influence of others that came before, and one that could not be replicated by others that came after.

Their creative output was, of course, cut short by their untimely deaths (Emily and Branwell bit the dust in 1848, Anne kicked the year after that, and Charlotte made it all the way to 1854). Still, their reputations continued to grow after their deaths. They are now considered to be one of the most influential literary families of all time, and their home in Haworth is a pilgrimage site (the Brontë Parsonage Museum) for booklovers from around the world. None of the Brontës bore any children, so any genetic genius died out with paper Patrick; sadly, he outlived all of his children, dying in 1861.

Parents are probably supposed to say that they don’t have a favourite kid, and Patrick undoubtedly loved them all, but we are under no such obligation! Debate has raged for over a century now: who was the best Brontë? Let’s take a look at the contenders…

Emily gets pretty much all of the love nowadays. She only wrote one novel – Wuthering Heights – which I once described as a bad-boy’s decade-long over getting friendzoned. It’s a pretty spooky read, full of hauntings and moors and incestuous marriages and stuff. I suppose it’s also a pretty good “eternal love” story, if you’re into that kind of thing. Critics have been analysing Wuthering Heights for decades, and I’d bet they’re not even halfway done – there’s enough layers of metaphor to keep them at it for a while yet. It’s definitely the most iconic Brontë novel (but could we really say that it’s the “best”? hmmm…)

As for the woman herself, Emily was a bit of a character. She had a bit of trouble holding down a job – mostly because all of the jobs for unmarried women her age at the time involved looking after kids, and she didn’t like that. In fact, she once told the pupils at the school where she taught that she preferred the school dog over all of them (same, girl, same). That teaching gig was the only one she ever had. She shrugged off the pressure to become a governess like her sisters, and focused intensely on her writing. She was the determined, hard-working, creative, childless-by-choice one. The media would probably call her a “nasty woman” if she were around today, but in reality, she was just cripplingly shy.

I must say I’m very biased here, because Charlotte’s magnum opus – Jane Eyre – is one of my favourite books of all time. Charlotte was the “first historian of the private consciousness”, writing a story where all of the action is told through the eyes and experiences of the central character. She pretty much invented first-person narration as we understand it today.

Jane Eyre tells the story of a young governess who survives a shitty childhood (complete with evil stepmother, and a boarding school that violates every health code ever), only to fall in love with her boss (who happens to be keeping his mad wife locked in his attic). It was a deeply feminist book, very progressive for its time, and so much more accessible and readable than Wuthering Heights! (In my humble whatever…)

Anyway, Charlotte was the pretty, popular one. Case in point: she received a pretty steady stream of marriage proposals throughout her life. One bloke, Reverend Henry Nussey, wrote her a letter asking for her hand – she turned him down because she just wasn’t that into him, and she thought (probably rightly) that being married to a clergyman would be boring as fuck. Another reverend – David Pryce – met her once (once!) at a tea party before he popped the question. She turned him down as well, figuring (once again, probably rightly) that he was bonkers. She did finally marry a curate (Arthur Bell Nicholls) – but even he had to propose twice before she finally conceded. No man was gonna hold Charlotte down!

Turns out, getting married was probably a bad call on her part anyway: Charlotte died less than a year after the ceremony, and it would seem that it was extreme morning sickness that done her in. Her death certificate listed “phthisis” (acute tuberculosis) as the cause of death, but today’s medicine points to an evil foetus as the more likely cause. Still, Charlotte did manage to out-live all of her siblings, and she was certainly more prolific than any of them. That’s a pretty strong case for her being the best Brontë, don’t you think?

When you start Googling people’s opinions on who was the best Brontë, you’re going to come across a squillion articles talking up Anne – the “forgotten” Brontë sister. People seem to really sympathise with poor little Anne, younger sister to two of the most beloved women writers in English literature. They do have a point: Emily and Charlotte would have been tough acts to follow.

Still, I’m not sure Anne is as “forgotten” as everyone says. Her book The Tenant of Wildfell Hall is certainly having a resurgence at the moment. It’s the story of a woman living in (you guessed it) Wildfell Hall; she really wants some alone-time, but drunk fuckboys keep coming at her from all directions. Anne basically used this book to sub-tweet all of her siblings. She sent up Charlotte and Emily, who wrote angry hard-drinking men as irresistibly attractive love interests, and her brother Branwell, who was himself an angry hard-drinking man in life. All of her writing had pretty strong moral messages, and her female characters were Strong Independent WomenTM, which was pretty controversial for the time.

Charlotte certainly wasn’t a fan of her younger sister’s work. She actually prevented The Tenant of Wildfell Hall being republished after Anne’s death, saying “Wildfell Hall it hardly appears to me desirable to preserve. The choice of subject in that work is a mistake, it was too little consonant with the character, tastes and ideas of the gentle, retiring inexperienced writer.” She sounds mad jelly, doesn’t she?

Anne has historically been a dark horse for the title of the best Brontë, but judging by how much love she’s got on the internet over recent years, she’s probably the frontrunner now.

If you want to talk about the real forgotten Brontë, spare a thought for poor, drunk Branwell. Popular opinion would have it that Anne is the one who got shafted, but I’m sure you have never read anything by Branwell – in fact, you probably didn’t even know there was a Brontë brother until now. Right?

In his younger years, Branwell’s father and sister thought he was an absolute genius. He was the darling of the family, intelligent and talented and driven. But, like so many white male boy-wonders before and since, his life quickly descended into a spiral of debt and addiction.

Anne took pity on him and got him a job, but Branwell got himself fired for having an affair with his boss’s wife (!). He frittered away the money he borrowed from his father (and, reportedly, stole from his employer), drinking and partying in establishments of ill-repute. He’d have been a fun guy to have along on a night out, but you probably wouldn’t have trusted him with your wallet.

As far as his writing goes, he and Charlotte actually co-wrote a book when they were children. He followed that up with assorted pieces of poetry and prose. Things looked promising for Branwell when he got a few articles published in local newspapers… but he was ultimately waylaid by his love for opium.

Branwell’s work is difficult to find today, and he’s barely a blip on the literary critique radar. He lives eternally in the shadow of his sisters, and you’d be hard pressed to find someone who’d unironically call him the best Brontë.

So, who was the best Brontë?

Well, obviously, my vote is with Charlotte (and I give an honourable mention to Branwell, for being such a hot mess). But the true winner is up to you! Cast your vote by commenting below (or telling us your favourite over at KUWTP on Facebook).