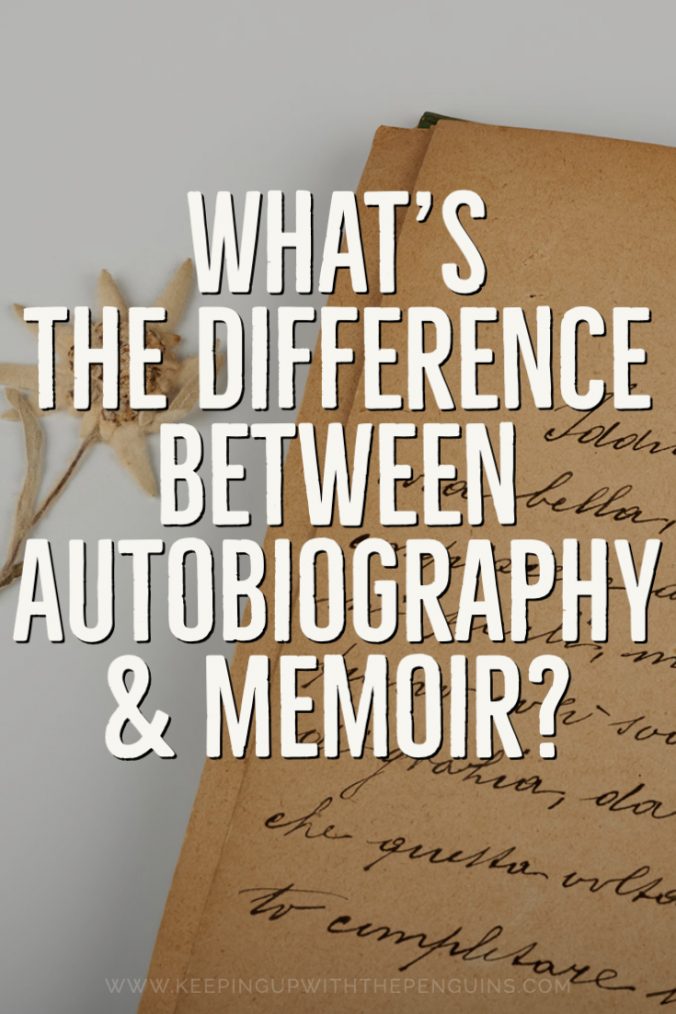 What’s The Difference Between Autobiography And Memoir?

For about as long as we’ve been making up stories about other people, we’ve been telling our own stories, too. There are two main book genres for people writing about their own lives: autobiography and memoir. Autobiography comes from Greek, translating roughly to “self life write”, while memoir comes from the French mémoire, meaning memory or reminiscence. It’s easy to smush these two categories together (as I do when categorising my reviews), but they’re actually quite distinct… most of the time. Here’s my guide to the difference between autobiography and memoir (and all of the exceptions to the rules).

Similarities Between Autobiography and Memoir

You’d be forgiven for thinking autobiographies and memoirs are pretty much the same thing. Both are shelved in the non-fiction section. Both contain stories about the author’s own life, written from the author’s perspective (and here’s the first of many exceptions-to-the-rule: sometimes authors play with convention, like Carmen Maria Machado cleverly using second-person in In The Dream House).

So, if both types of book are authors telling their own story, what’s the difference between autobiography and memoir?

This key difference between autobiography and memoir comes down to the popularity and/or notoriety of the author.

Autobiographies are typically written by/about people of note, people who have made a significant contribution to public life or history, people with long Wikipedia entries.

Often, autobiographies are written with the assistance of a ghost writer (especially for celebrities who aren’t writers themselves, such as sports stars and political figures). This helps ground their perspective and keep the narrative on track.

Memoirs, on the other hand, can be written by just about anyone. In fact, some of my favourite memoirs have been written by people we might otherwise never have heard of (e.g., Educated by Tara Westover). If someone has some kind of life experience that would be interesting or resonant for others, they’re well placed to write a memoir.

The fuzzy grey area in between this definition are professional memoirists. Writers like David Sedaris have made their name through writing about their own lives, even though they never escaped North Korea or lived in the White House. David Sedaris has achieved the level of popularity/notoriety that would normally warrant an autobiography, but his books are still definitively memoirs because of their other features.

A related difference between autobiography and memoir is the focus of the author’s story.

An autobiography’s main focus is presenting the facts and historical context of the subject’s life. The view is usually quite broad, taking into account any number of aspects and points of interest.

A memoir, on the other hand, is more narrow in focus (or, at least, it can be). A memoir is focused more on the author’s feelings and personal experience of events.

To put it in terms of the five Ws, an autobiography would usually focus on the what/when/who questions, while a memoir might focus on why/how.

Maybe the easiest-to-spot difference between autobiography and memoir is their timeline.

An autobiography typically covers the subject’s whole life, starting from birth (or even earlier). That’s why the best autobiographies are written later in the subject’s life, once they’ve done most of the interesting stuff they’re going to do. They also usually cover events in a linear chronological order, following the natural progression of life and time (though, as always, there are exceptions).

Memoirs are a lot more flexible in terms of their timeline. They might cover most of a subject’s life, or only a few years – even just a few weeks or days. Memoirs are anchored by key events in the subject’s life, so they can skip over the irrelevant stuff that came before or after. (So, bonus: a well-written memoir is almost always much shorter than a well-written autobiography.)

The final – and most difficult to define – difference between autobiography and memoir is the tone.

Basically: the vibes are different.

Autobiographies – with their neat chronological timeline and focus on facts – tend to be more formal in tone, and more traditional in style.

Memoirs can be formal too… but they can also be very informal, reflective in tone, even totally bizarre and experimental.

The Main Difference Between Autobiography and Memoir

Ultimately, the main difference between autobiography and memoir is whether the publisher prints “autobiography” or “memoir” on the cover.

Normally, bookshops – and book reviewers, like me! – will shelve them together, because these sub-genres have more in common than they do otherwise.

What are your favourite autobiographies or memoirs? Tell us in the comments!