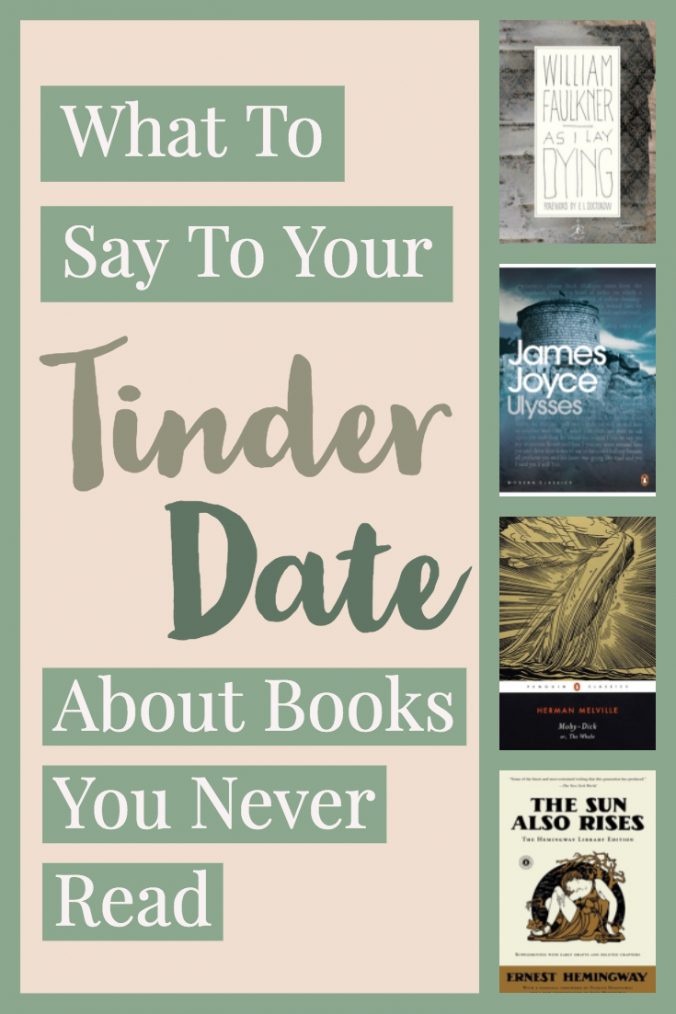 There’s no use hiding it: we all pretend to have read books we really haven’t. Mark Twain once famously described a “classic” as a book that people praise and don’t read. These fibs aren’t such a big deal when you’re having a casual chat with your family over lunch, or talking to a stranger at a bus stop… but what about the high-stakes of a first date? Favourite books are a go-to conversation starter, but what if you’ve never read their beloved Hemingway or Faulkner? It could throw your perceived compatibility with that hottie into peril. It’s fake-it-or-make-it time! To save you dashing to the bathroom to read a Wikipedia summary, I’ve put together a cheat sheet: here’s what to say to your Tinder date about books you never read.

Don’t say: “It’s all about the monster within, you know?”
Do say: “Ah, the prototype of doppelgänger literature!”

Don’t say: “I just love how Hemingway would show, not tell!”
Do say: “While it lacks Hemingway’s characteristic sparseness, it’s a fascinating insight into the changing role of men after the First World War.”

The Sun Also Rises isn’t my favourite from Hemingway’s works, but a lot of people love it so it might crop up. If you can, steer the conversation towards the origins of the story in Hemingway’s own life. No one’s quite sure whether Hemingway was rejected from the military due to his poor eyesight, or whether he just wussed out of being a soldier and snagged a position as an ambulance driver instead. Either way, themes of rejection and cowardice and male insecurity are present in all of his work. The Sun Also Rises is a “roman à clef” (a true story dressed up as fiction) based on the lives of Hemingway and his friends in the “Lost Generation”. Read my full review of The Sun Also Rises here.

Bonus tip: Hemingway is famously nicknamed “Papa”, so you’ll sound like a real literary insider if you call him that now and then.

Don’t say: “That’s the long one about looking for the whale, right?”
Do say: “Although his masterpiece is a hard slog for the contemporary reader, Melville was undoubtedly superior to Hawthorne.”

If your Tinder date says that Moby Dick is their favourite book, you can be pretty confident you’ve found someone who’s super patient and very persistent. After all, they finished and (apparently) loved a 600-page epic set on board a 19th century whaling ship. Melville experimented with perspective, narrative technique, chronology, and just about everything else that makes a book a book, so Moby Dick is a really tricky read. The good news is that means there are so many different meanings and interpretations of Moby Dick that you can make up pretty much anything you like and it will probably sound alright.

If you want to seem like you really have your finger on the pulse, talk about the significance of the work in the present-day context of climate change. Captain Ahab’s attempts to bring the white whale into submission drove him mad and ultimately led to his demise, which could be a metaphor for humanity’s struggle to control and dominate the environment. Read my full review of Moby Dick here.

Don’t say: “It’s, erm, a really hard read, isn’t it?”
Do say: “The focus on his delivery and his experimentation with form and style have really detracted from a true understanding of the work in the popular consciousness.”
Alternative do say: “How about I buy us another round?”

If you ask them, the Ulysses-lover will probably tell you that they are also patient and persistent, but beware: you might find that they’re pretentious and a little bit snobby as well. Ulysses is notorious for being one of the most difficult English-language books in the history of literature, and I see no shame in ‘fessing up that you’ve never read it (and probably never will). If you’re really determined to show off for them, however, you could ask them how they think it compares to Mrs Dalloway. Virginia Woolf’s novel was, in effect, a response to Joyce’s Ulysses, mirroring its style and form. Both take place over a single day, written in a hectic stream-of-consciousness style, and focus primarily on the lives of two central characters while others weave in and out.

Alternatively, you can simply insist on buying another round and change the subject entirely. It’s up to you. Read my full review of Ulysses here.

Don’t say: “There’s so many different narrators, it’s hard to keep track!”
Do say: “Faulkner is so skillful in the way he truly immerses the reader in the culture and vernacular of the rural South.”

Faulkner famously claimed that As I Lay Dying was written and published in a single draft. He said that he wrote the whole thing in six weeks, while working his day job in a power plant. Either he’s a real show-off, or a damn dirty liar. Still, he’s probably the most renowned author of the Southern Gothic genre, and he won the Nobel Prize for literature. As I Lay Dying tells the story of the death and funeral of a Southern matriarch, through the perspective of fifteen different characters in her family and community. The overriding message is that dying can be a relief from the suffering one experiences in life, and families are bonkers. Read my full review of As I Lay Dying here.

Bonus tip: pretty much every Faulkner novel features a death and/or a funeral of some kind, so if your date starts talking about any of his other works, just ask him what he thought about Faulkner’s depiction of funeral rites in that context. Works like a charm!

If you’re wondering what to say to your Tinder date and the book they mention isn’t listed here, do what I always do when I’m stuck: ask a lot of questions. People love talking about themselves and why they love what they love, so it shouldn’t be too hard to get them on a roll. Make sure you come back here as soon as the date is over and let me know which one I missed, so I can update this post accordingly! (You could also put out a cry for help over at KUWTP on Facebook!)