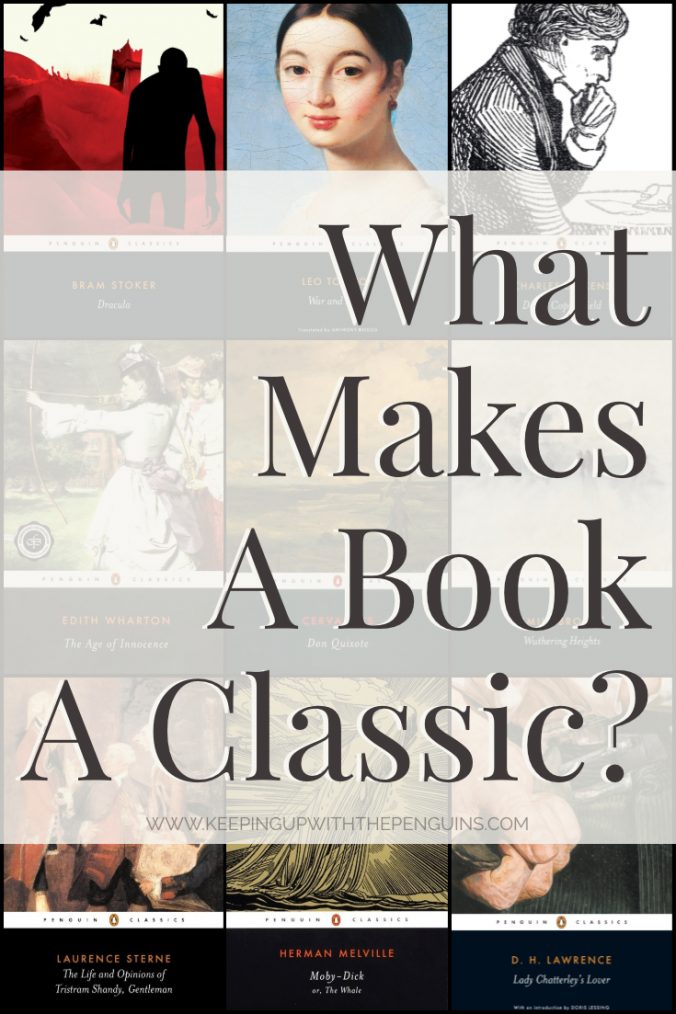 What Makes A Book A Classic?

What makes a book a classic? There are about as many answers to that question as there are booklovers. When I started the Keeping Up With The Penguins project, my goal was to catch up on all the classic books that everyone else seemed to have already read, even though I only had the most nebulous idea of what that actually meant. In categorising my reviews, I’ve used the rough guesstimation that books over 100 years old that are still in circulation must be classics, but over time I’ve come to realise that this might not be the only measure. So, let’s take a look at this eternal question and answer it for ourselves: what makes a book a classic?

Is “Classic” Even The Right Word To Use?

First off, let’s make sure we’re all talking about the same thing. Classic books are those we hold up as being exemplary or noteworthy in some fashion (more on that in a minute). Whether or not a book is considered a “classic” will change over time, between readers, and so forth. It’s a floating target, unlike related concepts like “the canon”.

The canon is more like a specific list of books that are considered “essential” in our understanding of a period, area, or group. That’s why you might hear reference to the “Western canon” (which would include books like David Copperfield, The Divine Comedy, and The Adventures Of Huckleberry Finn), or the “African American canon” (which would include books like Beloved, I Know Why The Caged Bird Sings, and Their Eyes Were Watching God). The canon is usually presented as a reading list, by a university or publisher. Consider it the cousin that comes to your classic books barbecue wearing an Armani suit.

Is every classic book written by a dead, white man?

Let’s address the big, hairy problem right up front: too often, when we talk about “classic” books, we’re talking about the ones written by dead white men. Straight men, non-disabled men, and men of wealth and power. There are exceptions, of course – Oscar Wilde’s The Picture of Dorian Gray, for instance, or the works of the Brontë sisters – but for the most part, it’s privileged white dudes all the way down.

I don’t think there’s anyone out there who honestly believes that those men are the only ones who wrote books worthy of being designated as classics, so why are writers of other identities so often overlooked? Reasons abound, to be honest, and I could probably write a thesis on the topic. For now, suffice to say, I think it’s a combination of a few factors: historically, white men were the only ones who had the opportunity to write (by virtue of their wealth and power) and the networks to disseminate their stories; the stories they published reflected a prevailing worldview, which made them popular; and the ivory towers were mostly staffed by more white men, who felt most comfortable teaching their students books written by people who looked like them (meaning students of that particular identity were more likely to take up a pen, see-it-to-be-it and all). On and on the cycle goes…


So, we must do what we can to redress the balance. Make sure that the criteria you choose to judge for yourself what makes a book a “classic” isn’t exclusionary. When you find yourself perusing shelves of classics, look for the works by women, by people of colour, by people with disabilities, by LGBTIQ+ people – any work from a perspective that has been marginalised in the past. Request those books, review them, recommend them, and make sure they get the recognition they deserve. By the magic of the internet, these works are now reaching previously-unimaginable audiences, and the publishers and gatekeepers are hearing the demands of readers to expand their catalogue. Keep fighting the good fight!

Let’s get to the fun stuff! How do we decide whether a book should be called a “classic”?

This is the most common, and most obvious, criterion: age. Or, put another way, we can be fairly confident that a book that has endured for decades or centuries – that has “stood the test of time”, if you will – is a classic. It’s a great idea because it’s easily quantifiable; there’s nothing subjective about how many years a book has been around, which means fewer arguments. But how old does a book have to be to be a “classic”, exactly? I used the nice round figure of 100 years, for simplicity, but that (of course) shifts year-by-year, and it’s a little long in some people’s estimation. Some experts suggest “generations”, rather than an exact number of years, because books that endure past those who were alive when it was first published must have something good going on. It’s an idea.

Of course, either yardstick would exclude books that many booklovers consider to be classics regardless: think To Kill A Mockingbird, or The Grapes of Wrath. That’s why some have suggested the creation of a new category, the “modern classic”, for those books that aren’t quite old enough to be considered classics proper, but are well on their way.

I think we can all agree that simply being old isn’t enough: what else makes a book a classic? The next most obvious criterion is whether or not it’s any good. An old book can hang around for lots of reasons, but in order for us to consider it a “classic” it should probably pass some test of merit. I’m sure you can see why this is problematic, though; gauging the quality of a book is deeply subjective (just ask anyone who’s been to a book club!).

A comprehensive discussion on how to determine literary merit is probably a bit beyond me and my scope here on my lil’ blog. What I will say is that I think it’s important to recognise that “good” doesn’t necessarily mean “readable”. For instance, I can acknowledge that The Life And Opinions of Tristram Shandy, Gentleman has a lot of literary merit, while also simultaneously believing that it sucked from a contemporary reader’s standpoint. A book’s literary merit and whether it is fun to read are two completely separate matters. And, failing a final ruling from an all-powerful dictator, it’s probably going to be up to each of us to decide for ourselves what constitutes “literary merit” and whether a book has it or not (for the time being).

Books don’t exist in a vacuum: they affect the world around them, and in turn take on new meanings when the world around them changes. Take, for instance, George Orwell’s Nineteen Eighty Four. His themes and imagery of surveillance, censorship, misinformation and government control are constantly evoked in political debates, and his work has taken on scary new resonance over the last few years. There are others, too, like Catch-22 or Strange Case of Dr Jekyll and Mr Hyde, that are so pervasive they actually become part of our cultural lexicon. We continue to read and reflect on these books because they’ve made such significant contributions to our world; they’ve become, in effect, household names.

Within literature itself, the significance and popularity of a book is often marked by its influence on other, subsequent works. Sometimes this as obvious as a direct adaptation (look at how many contemporary takes we have on Pride And Prejudice, for example, and Little Women). Often, though, it’s much more subtle, with recent works calling upon or emulating styles and themes of classic books. I think it’s only fair that we consider these kinds of literary and cultural contributions when deciding what makes a book a classic, as they make it possible for a book to a book to retain its popularity over time.

One of the most wonderful things about the written word is the way that it endures, and what it can tell us about the past. Even though, as we’ve acknowledged, perspectives on the past have all to often come from privileged white men with their own inherent biases, they still managed to record details that might have otherwise been lost, and we’re better able now than ever before to think critically about them as sources of historical record. Consider classic books such as Chaucer’s Canterbury Tales, which has taught us so much about the Middle Ages, or more recently the works of Dickens and the Brontës, which have given us a multi-layered understanding of the mores of Victorian England.

Some classic books take it one step further, and actually influence the course of history. The best example of that has to be Harriet Beecher Stowe’s Uncle Tom’s Cabin, often called The Great American Novel, and credited – by Abraham Lincoln, no less! – with prompting the American civil war and the crusade to end slavery. It’s a high bar, no doubt, but this kind of historical influence is surely at least part of what makes a book a classic.

Unsurprisingly, writers have thought a lot about this question (because, really, it concerns them most of all). Italo Calvino, a beautiful Italian author, wrote a whole book on the subject – Why Read The Classics? – and gave us a list of definitions that he felt, considered as a whole, would bring us closer to understanding what makes a book a classic. I’ve reproduced a few of my favourites here:

“A classic is a book which with each rereading offers as much of a sense of discovery as the first reading.”

“A classic is a book which even when we read it for the first time gives the sense of rereading something we have read before.”

“A classic is a book which has never exhausted all it has to say to its readers.”

“Classics are books which, the more we think we know them through hearsay, the more original, unexpected, and innovative we find them when we actually read them.”

“‘Your’ classic is a book to which you cannot remain indifferent, and which helps you define yourself in relation or even in opposition to it.”

Italo Calvino, “Why Read The Classics?”

He concludes that a universal definition of a classic book is basically impossible, and “there is nothing for it but for all of us to invent our own ideal libraries of classics”.


So, what makes a book a classic? I’m with Calvino, it’s ultimately up to each of us to decide for ourselves. That said, I think age, literary merit, cultural contribution, and historical influence are all good factors to consider. I think it’s also important that we do everything we can to ensure that we don’t end up lost in the cock forest (as Benjamin Law once so delightfully put it). We need to make a determined effort to include classic books written by women, people of colour, and other marginalised groups. What do you think makes a book a classic? Tell me in the comments (or share your thoughts over at KUWTP on Facebook!).

The Life And Opinions of Tristram Shandy, Gentleman – Laurence Sterne