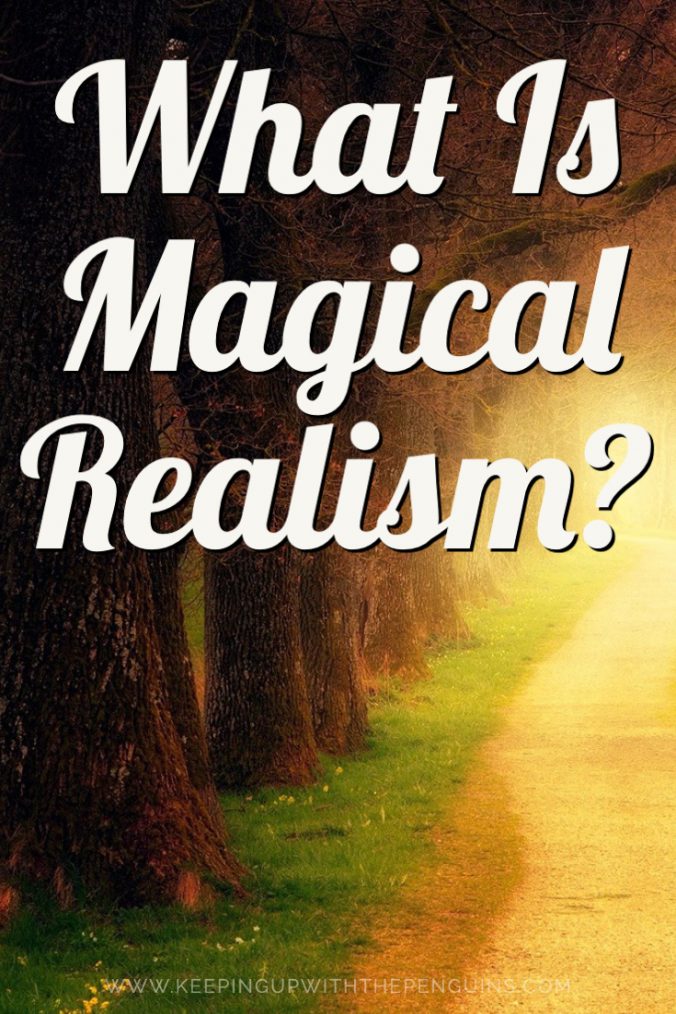 What Is Magical Realism?

Keeper Upperers, if you’re anything like me, you didn’t know fear until a book nerd brought up “magical realism” in a conversation and you had to nod along like you knew what the heck they were talking about. What is magical realism? Is it, like, realism that’s so good, it’s magical? Not quite. I’m here to save you from my fate (looking like a fool among people far smarter than me) with this handy for-beginner’s guide to one of the trendiest literary genres of the 20th century.

What is magical realism?

Let’s start at the very beginning with a basic definition. Magical realism is a literary genre where stories are set in the real world, the one you and I know, but there’s an element or undercurrent of magic running through it. It falls in the middle of the Venn diagram between literary fiction and fantasy. True lovers of the genre would balk at it being described at “fantasy lite”, and they’d have a lot of really good explanations as to why that’s not right, but for our purposes here, that explanation will do.

There are a few key things that every work of magical realism will have. Keep an eye out for:

All magical realism novels take place in the real world. The writer doesn’t invent a new world – the Planet Zorb 3959 or Land of Egelaria – as the setting for their story. You’d believe the story was taking place in your neighbourhood, or one like it, until… something weird happens.

The second key component of magical realism is, well, magic. Even though the story is set in the real world, there’s something supernatural or physically impossible that sticks its nose in at some point. That might be a talking animal, a levitating grandmother, a child that doesn’t age… And there’s no “abracadabra” to introduce them. They’re just presented as normal, the way the writer might introduce a pot plant or a traffic sign.

So, a fancier guide to magical realism might call this “authorial reticence”, but this ain’t one of those. When the author/narrator introduces the magical part of a novel written in the magical realism style, it’s very important that they don’t explain to you why it’s happening. Fantasy epics will have reams of backstory, explaining exactly how the magic works and how the present situation came to be. In magical realism, pigs just start flying, and you’re meant to cope with it all on your own. The narrator is completely indifferent; in fact, if they’re doing it right, you might not even notice at first that something very weird just happened.

Important note: There’s also a political aspect to a lot of magical realism, where the weird stuff is used to criticise a government or political incident of the day. However, those aspects are kind of unique to the time and place in which they’re written, and often left up to interpretation, so I’ve left them off the “essential” elements list here.

Authors actually pinched the idea of “magical realism” from art (the paint-on-canvas type). In 1925, a German art critic named Franz Roh coined the term “magischer realismus” to describe New Objectivity, a popular style of painting (at the time) that sought to make the ordinary look extraordinary. It was a whole find-the-beauty-in-every-day-objects deal.

Some writers were using magical realism long before that (think Kafka and his giant bug in The Metamorphosis, published ten years before Roh put pen to paper), but this was still a major turning point in our understanding of – and the popularity of – magical realism as a literary genre. Over the course of the 20th century, there were a few major “movements” or peaks in the publication of works of magical realism (one in the ’20s, another in the late ’40s, and a third in the late ’60s-early ’70s). Now, it’s kind of settled in as an accepted style/genre of literature, alongside all the others.

(Well… mostly. There’s still a lot of academic debate – isn’t there always? – about what “counts” as magical realism, whether magical realism even exists, etc. etc. I tried reading through and summarising the major talking points for you, but honestly, it made me want to pluck my eyes out with a fork. Suffice it to say: haters gonna hate.)

Magical realism is most commonly associated with the literature of Latin America (the southern areas of the continent that speak Romance languages, which is a disingenuous way of saying were-ravaged-by-colonialism). One of the first magical realists was Jorge Luis Borges, an Argentinian author who was writing that way before that German bloke came up with a fancy name for it. Now, we most commonly associate magical realism with Gabriel García Márquez (Colombian), and Isabel Allende (Chilean), and a handful of others from the same rough geography and time period.

That’s not to say that other parts of the world haven’t produced awesome writers of magical realism; it’s just that their work isn’t usually described in those terms. Take Haruki Murakami, with his blokes chasing cats down wells and all the freaky shit that happens there – that’s absolutely Japanese magical realism, but it’s rare that anyone says that in a review. Closer to home (for me, anyway), I would consider Melissa Lucashenko’s Too Much Lip a fabulous example of First Nations magical realism in Australia. So, geography might influence the way that we think about and identify magical realism, but it certainly doesn’t define it, and it doesn’t stop anyone from anywhere in the world writing it.

So, now that you’re sorted with a bit of history and a solid definition of magical realism, you probably want some examples, right? Well, you’re getting some, either way. Check these out…

One Hundred Years Of Solitude by Gabriel García Márquez

Yes, Gabriel García Márquez is the Granddaddy of magical realism in the sense that he’s the name people most commonly associate with the literary style. He also won the Nobel Prize for it in 1982, so there’s that. One Hundred Years Of Solitude is one of his best-known works; it’s not an easy read, necessarily, but it’s a must if you’re planning on having any conversations or debates about magical realism any time soon. Read my full review of One Hundred Years Of Solitude here.

Like Water For Chocolate is probably one of the best for-beginners books of magical realism. The concept is quite simple to grasp, even though the narrator never explains it explicitly: a girl loves to cook, and her emotions are infused into her food. If she’s sad while she’s baking a cake, everyone who eats it will feel sad, too. There’s a fun love story and a crazy cast of characters, and a few good recipes to boot! Read my full review of Like Water For Chocolate here.

Beloved is where we traipse onto territory that might be more familiar to us in other terms (American literature, slavery narratives, etc.) but is also actually a good example of magical realism. In Morrison’s story, a ghost is the embodiment of the collective history of black slaves, and given agency to tell their story throughout the narrative. A brilliant device, if a harrowing read. Read my full review of Beloved here.

The Particular Sadness Of Lemon Cake by Aimee Bender

Aimee Bender is a really interesting writer who incorporates magical realism into much of her work. She primarily writes short stories, all of which are worth a read as examples of magical realism and as excellent yarns, but The Particular Sadness Of Lemon Cake is a novel-length version. Think of it as the other side of the Like Water For Chocolate coin: in this story, a child develops the magical ability to taste the emotions of others in their food.

Kafka On The Shore by Haruki Murakami

I mentioned earlier that Murakami is a great example of an incredibly popular and critically acclaimed writer who writes magical realism without it (usually) being called magical realism. Kafka On The Shore is one such example. Keep an eye out for the talking cats in this strange dreamy novel about two people at the opposite ends of life who are drawn together by powers seemingly beyond their control.

Everyone In This Room Will Someday Be Dead – Emily Austin