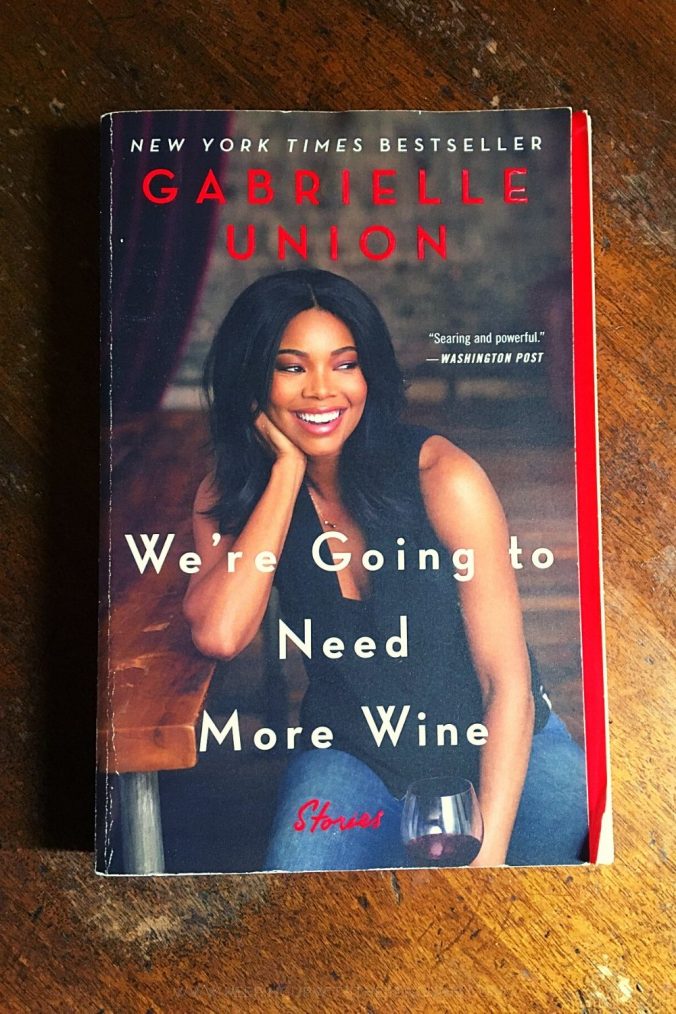 When my mother-in-law gifted me her copy of We’re Going To Need More Wine, I didn’t know much about Gabrielle Union beyond her iconic role in Bring It On – but I could tell by the title of her memoir alone that we would get along. For those of you who are similarly unfamiliar, Union is an “actress, activist, and one half of a power couple” and in this book she offers us “stories that are funny, complicated, and true”.

Or, to put it the way Union did, We’re Going To Need More Wine features “the good, the bad, and the WTF” (with chapters including Sex Miseducation, On Mean Women and Good Dogs, and Warning: Famous Vaginas Get Itchy Too). It follows a loose chronology of Union’s life, but subjects range from colorism to heartbreak to parties at Prince’s house.

Union grew up in Pleasanton, California, where her black family were “the chocolate chip in the cookie”. From a very early age, as she describes in the early chapters of We’re Going To Need More Wine, she felt compelled to avoid what she called the Black Pitfalls: the things that would make her “seem blacker” in the eyes of her friends (like eating fried chicken with her fingers). This window into Union’s early life shows us the ugly truth of casual racism and microaggressions, but also the universal experiences of childhood and adolescence that will make you laugh and wince with nostalgia (regardless of race). Union in particular expresses gratitude for the Judy Blume books, for giving her and her friends at least a partial education back in the days before girls could simply Google what was happening to their bodies.

A major turning point in Union’s life came in her late teens, when she was the victim of a horrifically violent sexual assault in her workplace. (Obviously, a content warning for that – Union’s description of the event is detailed, but not drawn-out or gratuitous.) Even though the tone of We’re Going To Need More Wine stays casual and humourous, it’s clear the significant impact that this trauma had on Union’s psychology moving forward.

From there, she describes the ups and downs of young to middle adulthood: a firey failed marriage, an acting career, bad hairstyling, and all the rest of it. The real highlights are her frank (and funny!) philosophies on sex. Union is unabashedly and unashamedly liberated in that area; for her, sexual variety is one of the key pleasures of life, and she throws a big middle finger up at the patriarchal values that would shame women out of exploring that facet of themselves.

“You can’t take your pussy with you,” she says at one point. “Explore the full range of everything and feel zero shame. Don’t let society’s narrow scope about what they think you should do with your vagina determine what you do with your vagina.” (Yes, I immediately took a picture of that page and sent it to everyone I thought would appreciate it.)

From that alone, I’m sure you can tell that We’re Going To Need More Wine feels like a boozy conversation with a friend, one that runs the full gamut and has you cracking open another bottle just to keep it going. That doesn’t mean that it’s fluffy or insubstantial, though. As well as exploring race and violence and sexuality, Union uses anecdotes from her life to discuss illness, death, fear, and vulnerability, too. It’s a bit of a bait-and-switch, and a highly effective one.

I think the main message that I took away from We’re Going To Need More Wine is that “fake it ’til you make it” can only get you so far. You can “fake” your smile or your marriage or your opinion of yourself, but you might not like where you end up because of it. What will you “make” of who you’ve pretended to be? That’s a recurring theme throughout We’re Going To Need More Wine and Union’s life; every time she ignored her intuition and went against “her truth”, everything turned to shit. Of course, authenticity and intuition don’t guarantee a perfectly happy life (nothing does), but it’ll feel a hell of a lot better than the alternative – that’s what I think Union was trying to get across.