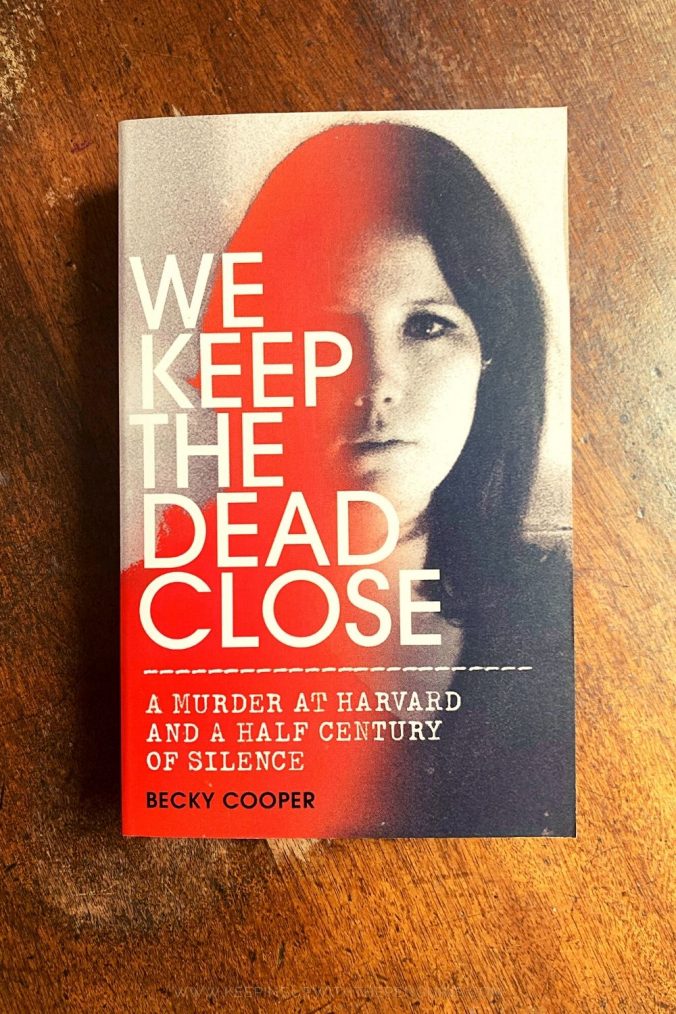 In 1969, Harvard was merging with its sister school Radcliffe, and the administration was trying desperately to curb student activism and the growing influence of counterculture. That same year, 23-year-old graduate student Jane Britton was killed in her apartment. Decades later, student Becky Cooper heard a garbled version of the story that had passed into Harvard folklore. She spent ten years chasing the truth of the story, and We Keep The Dead Close is the result.

First off, I love the format of We Keep The Dead Close. There are no schlocky high-gloss photographs; it’s laid out like a literary fiction novel. There are transcripts of interviews, extracts from journals and letters, facsimiles of newspaper coverage, and extensive notes. It smacks of a classy, well-researched piece of journalism.

Vignette-like chapters alternate between the initial discovery and investigation of Jane’s murder, and Cooper’s own discovery and investigation of the crime. The story Cooper heard was sensationalised, as all rumour-mill murder stories tend to be: apparently, an archaeology student was murdered in the library with an ancient stone tool, by the married professor with whom she had an affair. Her body was sprinkled with red ochre, an ancient burial rite, and adorned with jewellery for her journey into the afterlife, a macabre ritual that pointed to the killer – but he got away with it, because the Harvard administration covered it up. Of course, the truth of Jane Britton’s murder was less sensational, but no less fascinating.

(And, okay, fine, some of the facts of the case are stranger than fiction. The red ochre bit was real. And a man who might have been able to provide crucial evidence was struck dead by lightning. True story.)

The New York Times, reviewing We Keep The Dead Close, gave it the headline: “New Book Returns To An Irresistible Theme: The Harvard Murder”. Indeed, the institution of Harvard plays a major role in the narrative, and Britton’s murder is – in effect – the harsh reality of the ‘dark academia’ aesthetic. Cooper lifts the veil on the cryptic world of elite tertiary education, the pot-holed track to tenure for professors and the politics of progression for students. But it’s not as simple as “there was a murder on campus and Harvard covered it up”.

You’ve heard of “leaving no stone unturned”? Cooper turns the stones, the pebbles, and digs up the dirt underneath them for good measure. In We Keep The Dead Close, she follows every lead and goes down every rabbit hole. It’s particularly admirable work in a genre that so often demands cohesive narratives be made out of the messy strands of a life. Cooper has no compunction about presenting inconclusive evidence. But that does mean, at times, the reader could easily get bogged down in the details. Cooper’s passion for her subject – and her tireless investigation and presentation of it – is enough to light the way, if the reader is willing to persist.

It takes until Part Four (about half-way through the text) for the story – and Cooper’s driving force – to really come together. But when it does… hoo boy! You won’t be able to put it down. I worry for the readers who might abandon it before they get to that point (see above: rabbit holes, boggy details). It’s not ideal structurally, but We Keep The Dead Close is one of those rare books that you really can’t form an opinion on until you’ve read it all the way through. It’s the Schitt’s Creek of contemporary true crime.

I am particularly impressed with the emphasis that Cooper places on the impact of the crime on those left behind, Jane Britton’s friends and family and co-workers. Clearly, much care and consideration went into her decisions about how to best portray the decades-long effects of violent crime, without betraying her subjects. I really hope that We Keep The Dead Close is representative of a new direction for true crime as a genre, in that regard.

By Part Seven (near the end), We Keep The Dead Close is about so much more than the crime, the investigation, or the victim. It’s about our collective histories, the stories we fit around the facts of our lives and the lives of others, how and why we construct these narratives (and whom they serve).

Vox highlighted this aspect in their review, saying that: “We Keep The Dead Close joins Michelle McNamara’s I’ll Be Gone In The Dark… within a growing true crime movement. This movement aims to underscore just how deeply the act of reporting on a true crime story – especially one in the past – can alter and warp the story in ways that serve to destroy the truth, whatever that may be.”

As one of the interviewees says, it’s a Poirot mystery with a post-modern ending.

All told, We Keep The Dead Close isn’t a straightforward read, but it’s a worthy one. If you’re looking for a fast-paced linear whodunnit with a foreseeable conclusion, you’ll need to pick up a fictional detective mystery instead. But if you’re interested in how a real cold case gets solved, in the role institutions play in our lives, in the way our stories shape who we are and what we know about the world – you absolutely must put We Keep The Dead Close on the top of your to-be-read pile.

My favourite Amazon reviews of We Keep The Dead Close: