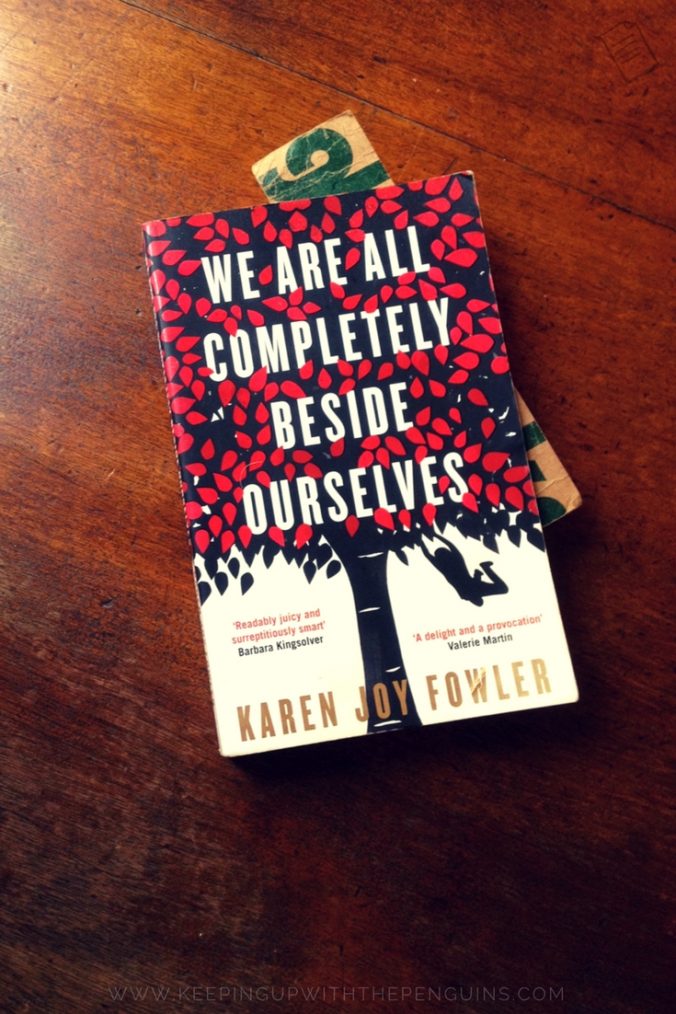 We Are All Completely Beside Ourselves – Karen Joy Fowler

As promised, I’ve broken free of the spiral of novellas written by dead white guys. This week on Keeping Up With The Penguins, we turn our attention to something very different: We Are All Completely Beside Ourselves by Karen Joy Fowler.

The front of this edition is stuffed with pages upon pages of positive reviews and accolades. We Are All Completely Beside Ourselves has won the PEN/Faulkner Award for Fiction. It was shortlisted for the 2014 Man Booker Prize. I learned from these pages that it was published in 2013, it was Fowler’s tenth novel, and it had clearly won legions of fans around the globe, but apart from a couple of vague references to “family” in the blurbs, I had no bloody idea what the book was actually going to be about.

It turns out there’s a very good reason for that. But more on that in a minute…

Sitting down to start reading in earnest, I was literally lol’ing before ten pages had passed. Rosemary, the protagonist, narrates a scene from her university cafeteria, watching a couple breaking up at a nearby table. It sounds banal as all heck, but it was beautifully done, and Rosemary’s deadpan humour won me over instantly. I was hooked!

It’s hilarious, but quickly starts foreshadowing some ominous shit. Both of Roesmary’s older siblings are notably absent (one apparently in some kind of legal trouble, the other vanished mysteriously some time ago), and her relationship with her parents stinks. But why? That’s what you’ve got to read on to find out.

Here’s the thing: this is the first time, in the history of this project, that I have hesitated in giving a spoiler. Keeping Up With The Penguins is, after all, one big spoiler. If I’m reviewing a book published over a century ago, I don’t really give a fuck if I’ve “ruined” it for you. Even the newer books I’ve reviewed have been turned into movies that everyone’s already seen, or have plots so hackneyed that they seem impossible to spoil anyway.

This book is different. The first plot twist is so (a) unexpected, and (b) central to what makes this book special, that it’s giving me pause. Still, it’s impossible to review this book properly without revealing its “secret”. Don’t get me wrong, the value of Fowler’s writing isn’t completely based on the “big reveal” – it’s just the dawning realisation, the moment of coming to an understanding while being completely bewildered at the same time, is so precious that I’m loath to steal it from anyone else.

You have been warned. Spoilers from We Are All Completely Beside Ourselves are to follow.

Back out now if you’re planning on reading this one (which you really should, I can’t recommend it highly enough – get it here).

Anyway, Rosemary’s sister is Fern. She adored Fern, they grew up together, but Fern vanished in an instant when they were 5 years old without any explanation or farewell. You’re about 70 pages in at this point, and you’ve really bonded with Fern. You’re gripped by her marked absence in Rosemary’s life, and the scars it has left on her mentally.

Fern is (wait for it) a chimpanzee.

She wasn’t a pet: Rosemary’s hippie ’70s psychologist parents were literally raising Fern The Chimpanzee as a member of their family. I’m big enough to say it: I did not see that plot twist coming. I honestly thought Fern The Human was dead, maybe murdered by the older brother (Lowell) who’s on the run from the law. I didn’t see the twist coming at all, and I’m deeply grateful. The elegance with which Fowler carefully orchestrated the reader’s bond with Fern before revealing her species, how cleverly she forced the reader to examine the line we draw for ourselves between animal and human… I was amazed. I am in awe. Hats off, Fowler!

(Also, hats off to the publicists who have managed to keep this twist under wraps, to this day. It’s not mentioned in the Wikipedia page, it doesn’t feature anywhere in the publicity materials, they might tell me to shut down this review – it’s amazing work in the technological age.)

Anyway: once you get past that, there’s a stack of revelations still to come: How Fern left, why she left, what Lowell did, and why their parents are so batshit crazy. Rosemary and Lowell are briefly reunited at one point, and it turns out he’s been doing a spot of animal activism “work” outside the law. He’s been trying to find Fern, and the stories of the cruelty he witnessed broke my heart. Like, everyone was looking at me, the crazy-lady-crying-over-her-book-on-the-bus broke my heart.

I’ll tell you right now that there’s no “happy ending” in this book: the best you’ll get is a resolution, a reconciliation, an atonement, but you couldn’t call it “happy”. There, I’m done spoiling things now!

It’s clear that Fowler did a lot of research for We Are All Completely Beside Ourselves, but it wasn’t one long info-dump like, say, Still Alice. Fowler doesn’t just demonstrate how much she knows; it’s all revealed organically through the way the story is narrated. I cannot overstate how clever and masterful it is!

What’s more, Rosemary is a somewhat unreliable narrator, but it’s written in a way that’s not frustrating to the reader and doesn’t detract from your empathy for the character or engagement with the story. Fuck, I love this book!

On the animal-rights stuff: Fowler said in an interview “I believe in science and in medical research. I eat meat…. [but] if we can’t bear to look at what we are doing, then we shouldn’t be doing it.” This really closely mirrors my own personal philosophy, which might be why this book resonated with me so much. I kept checking in with myself, asking whether Fowler was maybe getting preachy, or patronising people who think that animal activists are a bunch of smelly hippies, but I don’t think so. The story is heart-wrenching, and the theme of animal rights is inextricably bound with the universal themes of sibling loyalty and guilt. It’s good, regardless of your political or moral vantage point.

I drank the Kool-Aid, I’ll admit. I started recommending We Are All Completely Beside Ourselves to people I barely knew before I finished it. My review cannot possibly do it justice. If you’ve read this far, you’ve already the book, so I’m glad you know what I’m talking about (let me know your thoughts in the comments!). If you read past the spoiler warning without having read the book, you’re maybe a bit of an idiot, but I still love you and you should go ahead and read it anyway.

My favourite Amazon reviews of We Are All Completely Beside Ourselves:

There are few books I’ve loved as much as I loved We Are All Completely Beside Ourselves, but you can find my full list of recommended reads here.

Remember These? Books From High School That You Should Revisit

7 Books You Can Read Over and Over Again