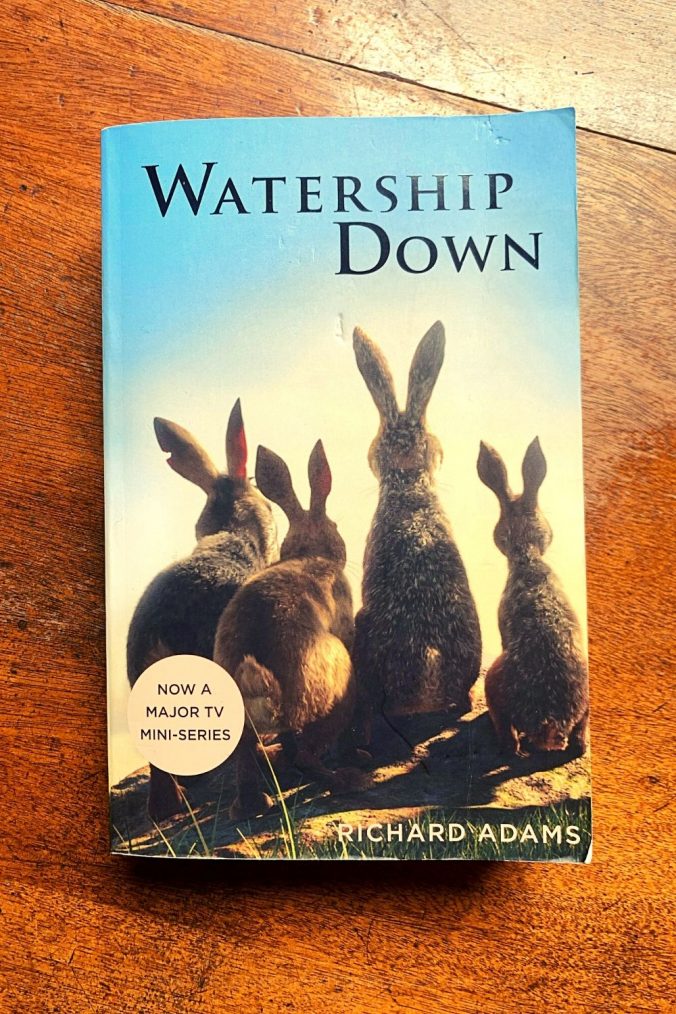 I’d heard a lot of pop-culture references to Watership Down, but before I read it I didn’t know anything really about it (except that it was about bunnies…? maybe?). Turns out it’s a 1972 children’s adventure novel by English author Richard Adams, based on a meandering story he made up to entertain his daughters during a long road trip.

(His daughters told him it was so good, he should write it down, so he did… only to have it rejected by several publishers on the grounds that it was “too grown up for children”. So, I guess the Adams clan have mature tastes?)

The story is set in the Berkshire and Hampshire countryside, near where Adams and his family lived. As I suspected, it revolves around a group of anthropomorphised rabbits from the Sandleford warren. The inciting incident comes quickly, when a small weirdo rabbit named Fiver has a “frightening vision” of the warren’s imminent destruction.

He convinces his best mate, Hazel, to help him round up as many of their rabbit friends as possible and escape before the Bad Thing comes (he doesn’t know what it is, just that it’s Bad). Most of the rabbits tell them to bugger off, understandably, but a handful of them agree to follow Hazel and Fiver into the great unknown.

The plot device of a psychic rabbit was really quite baffling, but I tried to just go with it – and good thing, too, because most of the action throughout Watership Down relies on Fiver sensing trouble. Other than that, Adams does a pretty convincing job of depicting the lives of rabbits. He even invents language, culture, and mythology for them, so it’s thoroughly believable… again, aside from the preternatural foresight thing.

Anyway, Hazel and Fiver and co. repeatedly escape predators by the skin of their teeth. Sometimes, they befriend them (like the large seagull who later returns to help them fight off other Evil rabbits). They join – and then escape – a warren where rabbits are being bred for food. They build their own warren on Watership Down (yes, it’s the name of a place, rather than a plot point about a sinking vessel), but soon have to face up to the existential crisis of an absence of does (female rabbits). They manage to collect a couple from a nearby farm, but not enough to stave off their colony’s collapse.

So, their big final battle – the long-awaited climax of Watership Down – sees them infiltrate the Efrafra warren, ruled by the tyrannical despot General Woundwort. They manage to smuggle out enough does for requisite babymaking (like rabbits, etc), but the General is not easily defeated.

I’m not sure if I read it “right”, but Watership Down seemed to me like an indictment of anthropogenic climate change and the exploitative agricultural practices of capitalism, cloaked in a children’s story with a few made up words (the language of “lapine”, as invented by Adams). Others have read all kinds of stuff into it, too; it could be an allegory for class struggle, the Cold War, fascism, extremism… basically, Hazel and Fiver and co. are an oppressed minority who just want to LIVE, dammit, and they’ll fight to the death against the forces that would stop them doing so.

Adams, though, insists that it was never his intention to mirror such grown-up realities in his children’s book. He intended Watership Down to be “only a made-up story … in no sense an allegory or parable or any kind of political myth. I simply wrote down a story I told to my little girls,” he told the BBC in 2007. Still, whatever he meant by it, it clearly has motifs and themes that work on multiple levels.

It seemed unnecessarily long, though, particularly toward the end. It all just got a bit formulaic: just as you think the rabbits are safe and happy, a new danger arises that looks set to doom them, only they overcome it by working together and appreciating each other’s strengths. As an armchair editor, I would’ve suggested splitting the story in two, and made the whole Efrafra business a sequel (or, at least, a second volume – Watership Down 2: Back In The Warren).

As it stands, the popularity of this children’s book about bunnies persists, fifty years after its release. It’s won a bunch of awards (including the Carnegie Medal and the Guardian Prize), and it’s been adapted for film and television multiple times (including a 2018 Netflix series). I’m glad to have read it, so I can finally “get” all those pop culture references, but I doubt I’ll be revisiting it – even if there was a kid around to read it to, I doubt I could get them to sit still for long enough.

My favourite Amazon reviews of Watership Down: