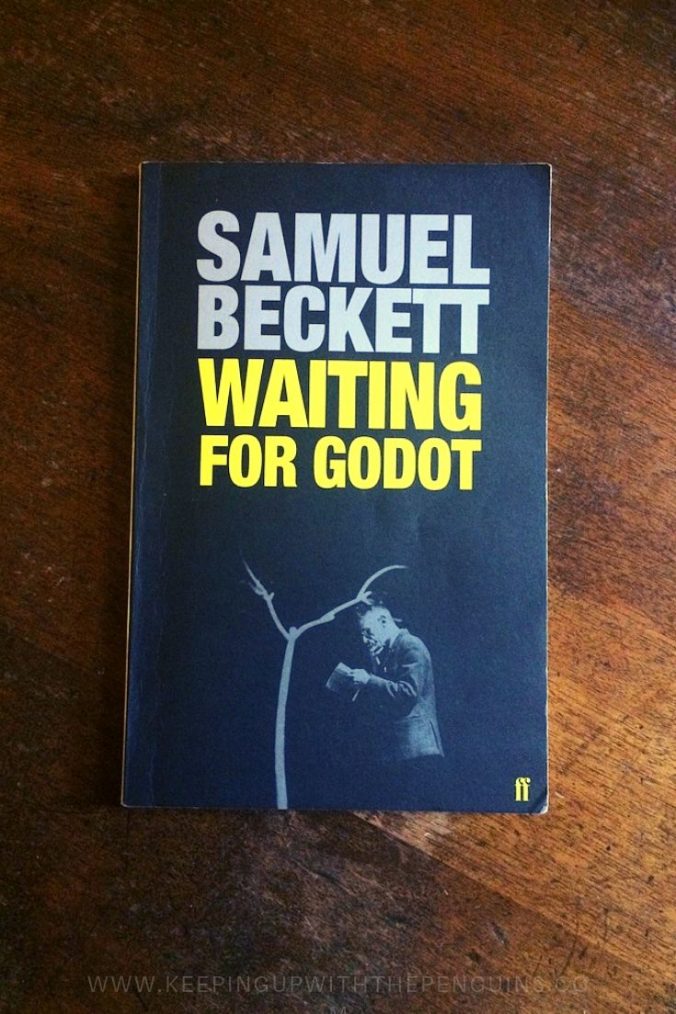 According to the blurb, in Waiting For Godot “nothing happens, nobody comes, nobody goes, it’s awful”. That’s a strange way to sell a story, don’t you think? But what else would we expect from Samuel Beckett? After reading and reviewing his novel Murphy a while back (that was a bonkers reading experience if I’ve ever had one), I wasn’t sure I’d ever return to his work – but Waiting For Godot, the “tragicomedy in two acts”, piqued my interest. So, here we are!

Fun fact: Waiting For Godot was originally a French-language play (En attendant Godot), and Beckett did his own translation to bring us the English version. How often does that happen?

I swore out loud when I opened my copy, to discover that it was annotated all to hell. Some previous owner (clearly a drama student, or arty-farty equivalent) had underlined and scribbled and highlighted all up on every page. So, consider this a timely reminder to flip all the way through your secondhand books before you purchase them, people! I thought I could look past it to read Waiting For Godot, but despite my best efforts, it was really distracting.

But let’s get to it: just about everyone is already familiar with the premise of Waiting For Godot, right? Two blokes (Vladimir and Estragon) stand around in front of a tree, waiting for a bloke named – you guessed it! – Godot, who – spoiler alert! – never shows up. To be honest, I could probably end the review right here, you know everything you need to know now.

But if you insist, I’ll go on.

Vladimir and Estragon are a couple of clowns, really. They shoot the shit, they repeat themselves, they trip over stuff, they eat turnips. It’s all very Laurel and Hardy. While they’re waiting, they’re joined briefly by another bloke – Pozzo – and his slave – Lucky. Oh, and a kid comes around a couple of times, to tell them that Godot may or may not show up eventually, which is a big help.

The thing about writing such a stripped-down bare-bones play is that everyone wants to project their own meanings onto it (which seems to have shit Beckett up the wall). “Because the play is so stripped down, so elemental, it invites all kinds of social and political and religious interpretation”, wrote Normand Berlin in a tribute to the play in Autumn 1999. “Less” forces us to look for “more”.

The identity of Godot, in particular, has been the topic of hot debate ever since the play was first performed. Beckett insisted – time and time again – that he literally just meant for the character to be a regular old bloke named Godot, but everyone kept hounding him about whether it was a metaphor for God or war or whatever the fuck. He told Ralph Richardson that “if by Godot I had meant God, I would [have] said God, and not Godot,” which he noted “seemed to disappoint [Richardson] greatly”.

To be honest, I’m not that interested in detailing all of the possible meanings and interpretations of Waiting For Godot – you could write a thesis on it (in fact, people have, and you can read them all elsewhere). I was happy to simply read the play on the surface level, and on the surface level it was okay. A good gimmick. Waiting for a bloke that never shows up! Classic! Well done, Beckett. Now, we can all move on.

One aspect of the play’s history I did find particularly interesting, however, was its popularity in prisons. In 1953, a prisoner in Germany’s Lüttringhausen prison found a copy of the French edition, translated it himself into German, and sought permission to stage it himself behind bars. He later wrote to Beckett: “You will be surprised to be receiving a letter about your play Waiting for Godot, from a prison where so many thieves, forgers, toughs, homos, crazy men and killers spend this bitch of a life waiting … and waiting … and waiting. Waiting for what? Godot? Perhaps.” Beckett was intensely moved by the story, and he took “tremendous interest” in prison productions of Waiting For Godot from then on. He was generally reluctant to grant permission or rights for film and television adaptations, but for prisons and prisoners he made an exception.

I don’t read a lot of plays, so I’m not sure if this is a universal feeling for the format or specific to Waiting For Godot, but I couldn’t help feeling it would be better to see it played out on stage than to read it. Beckett writes in a lot of visual gags and slapstick humour as stage directions, and rhythmically it just seems like it would be better read aloud. I’m sure I could find a filmed version online somewhere, you might be better off looking for one as opposed to reading the paper-and-ink version.

My favourite Amazon reviews of Waiting For Godot:

@keepingupwiththepenguinsonline
•
Follow
Where You Left Us is a “glittering gothic mystery about healing, home, and how to pick up the pieces when you feel left behind”, according to the blurb. That’s great and everything, but what really hooked me was the bit where they described it as “a mash-up of Wuthering Heights and Sherlock Holmes, with Taylor Swift’s evermore as the soundtrack”. Yes, please! 🖤 @UQPBooks were kind enough to send me a copy for review. . It’s rare to read a gothic(ish) novel set in Australia, so Where You Left Us was wonderful on that basis alone. Wilde also weaves in two romances, both equally lovely, without overshadowing the family drama. It all culminates in a good (if fairly foreseeable) conclusion for a fun and intriguing read. My full review is up on the blog now (link in bio 👆) - 🪦🪦🪦🪦/5 . #WhereYouLeftUs #RhiannonWilde #UQPBooks
View on Instagram |
1/9

@keepingupwiththepenguinsonline
•
Follow
My favourite five-star books of September! ⭐️ These three books each knocked my socks off and blew my mind whole 🧦🤯 . What were your best reads this month? 📚 . #SeptemberReads #BestBooks #5StarReads
View on Instagram |
2/9

@keepingupwiththepenguinsonline
•
Follow
Ever turned the last page of a book, put it down, taken a deep breath, and said to yourself: “what the FUCK?” 😳 . It could be a good wtf, a bad wtf, or a pure confused wtf, but whichever way it goes, it sticks in your mind for days. I’ve put together a list of book endings that will make you say wtf, it’s up on the blog now (link in bio ☝️). . Which book ending made you say WTF?!?! . #WhatTheFuck #BookReels #BookwormProblems
View on Instagram |
3/9

@keepingupwiththepenguinsonline
•
Follow
Of Mice And Men is a staple of English lit classrooms, despite repeated and sustained attempts to have it banned or censored 🚫 Having finally got around to reading it for myself as a grown-up, I have to say: this might be the first time I’ve ever thought that people wanting to keep a book out of the classroom might have a point 😳 Not because of “vulgarity” or “obscenity” or whatever bullshit they’ve come up with this year, but because this book is messed up ⚠️ . You might be expecting the standard violence, racism, and ableism that was all too common in that period, but what you might not be prepared for is the constant and pervasive animal cruelty and death! Dogs and puppies – oh, my heart 💔😭 I had to cuddle with @Fyodor.Dogstoyevsky for an hour after I’d read it. I can concede that it’s all beautifully written, but that makes it WORSE! My full review is up on the blog now (link in bio 👆) - 🐁🐁🐁🐁/5 . Which book deeply traumatised you? As a kid or as an adult - no shame here! . #OfMiceAndMen #JohnSteinbeck #BannedBooks
View on Instagram |
5/9

@keepingupwiththepenguinsonline
•
Follow
Anyone else feel like their taste in books is kind of frenetic? 🤪 Bookstagram bangers, small press poetry, cataclysmic classics - I’ll do it all! 📚 . #BookReel #BookLover #BookStack
View on Instagram |
7/9

@keepingupwiththepenguinsonline
•
Follow
I loved, loved, loved Chris Flynn’s last book, Mammoth – it was one of the few things that actually made me laugh in the clusterfuck that was 2020. So, when I saw he had a new book coming out, I sat up straight and said “yes, please!” in my polite voice. The wonderful team at @UQPBooks came through and sent me a copy of Here Be Leviathans for review. . It’s a collection of nine short stories, narrated by animals, places, objects, and even the (very) odd human. A grizzly bear on the run, a plane seat in a terrifying crash, a genetically modified platypus with the power of speech – each and every one, bizarre and brilliant. Flynn really pushes the boundaries, and dammit, it works! My full review is up on the blog now (link in bio 👆) - 🐻🐻🐻🐻🐻/5 . Are you eagerly awaiting a new book from any particular author? I’m keen to read Celeste Ng’s forthcoming novel, and I can’t wait to see what Carmen Maria Machado does next! 🤗 . #HereBeLeviathans #ChrisFlynn #UQPBooks
View on Instagram |
8/9

@keepingupwiththepenguinsonline
•
Follow
The wait was worth it for this BOOK MAIL! 📬📦 Shout out to all the postal workers who put up with ridiculous disgruntled queues to bring us our beloved packages 💞 . #2022Books #BookMail #NewBooks
View on Instagram |
9/9