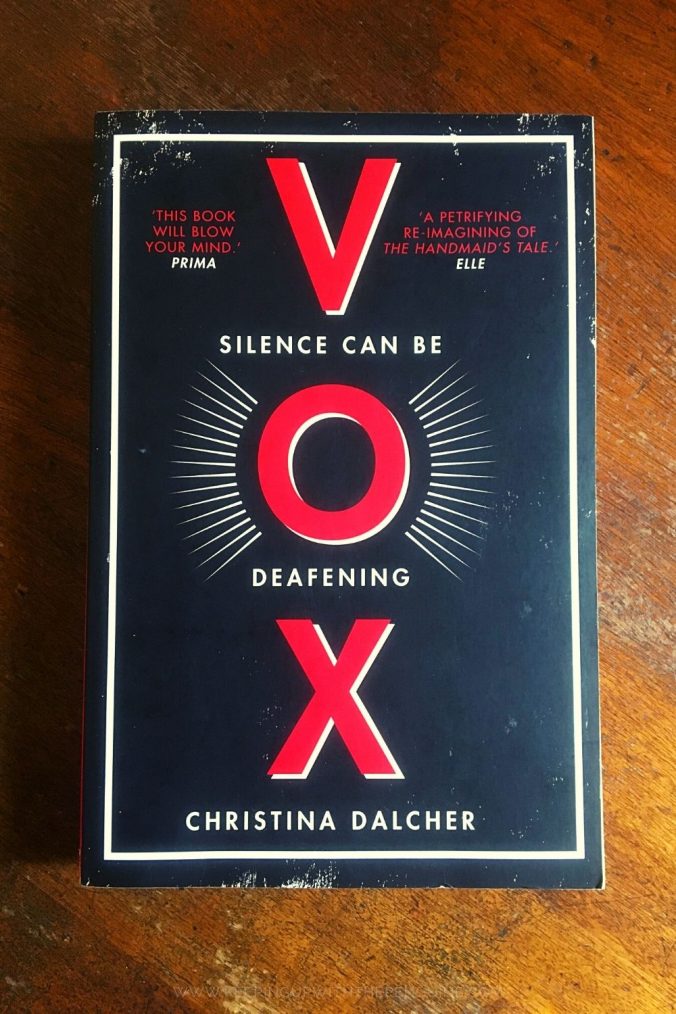 The last four years brought us something I think we can only just now begin to appreciate: a resurgence in The Handmaid’s Tale-inspired feminist dystopian literature, one of the few things actually made great again. I wonder if someday we’ll look back on this particular time as a literary category or movement all of its own (I’d suggest calling it Trump lit, but I don’t want to give him the satisfaction). Vox was one of the ones that came mid-way through in 2018: not quite early enough to be prescient, but not quite late enough to be retrospective, and with a weight of expectation on its shoulders.

Note that the man himself is never actually named in Vox: he is simply alluded to, the president elected after a black man’s historic term in office, plunging the United States back into a totalitarian regime with the backing of the country’s Bible Belt. The new government forces women out of the workforce, freezes their bank accounts, takes away their passports – it all sounds familiar, right? What makes Vox different is one additional catch: women and girls are restricted to speaking just 100 words a day, monitored by “bracelets” capable of delivering sharp electric shocks to those who exceed the limit.

If you’re like me, your mind has probably jumped to all of the alternative methods of communication that women could use to resist. Dalcher is one step ahead of you. Pens and paper are forbidden, along with books and mail and all other iterations of the same. Anyone caught using sign language is hauled off and subjected to unspecified but undoubtedly horrible punishments. Even a nod is enough to make a woman feel self-conscious. This is all part of the plan, the Pure Movement, to throw America back to a bygone era (that, really, didn’t exist in the first place) of men at work and on top, women at home and silent.

The narrator, Jean, sums it up on page 1: “I’ve become a woman of few words”. Her husband, Patrick, is a high-ranking White House official. They have four children, three sons and a daughter. Their eldest son, Steven, has been lured into the Pure Movement via a religion class at his school. The ascendancy of the Pure Movement, and the family’s descent into fear and mutual distrust, are revealed through Jean’s recollections as her own story unfolds in the present.

Jean has been forced to give up her career as a neuro-linguistics researcher, studying aphasia (loss of language), under the new regime. She devotes a lot of time to blaming herself for not taking a more active role when the first warning signs of impending doom emerged. She, and most others, thought that the “hysterical” feminists were being “over the top” when they warned of what was to come.

Dalcher does a good job – for a debut novelist – of depicting Jean’s complicated relationships with her children. The middle two (twin boys) get kind of lost in the shuffle, but she resents Steven for bringing the prying eyes of the Pure Movement into their home, and fears for the future of her youngest, a daughter. There’s one particularly terrifying moment when Jean wakes in the night to hear her daughter shouting words in her sleep. She tries desperately to reach the girl before she hits her limit (at which point, she’ll receive an electric shock from the bracelet), but when she does Jean has no words of her own left to comfort the girl. It’s heartbreaking, and probably the one scene from Vox that truly stuck with me. I also liked that Jean’s character was unabashedly angry (who wouldn’t be?), remorseful (that she didn’t do more before it was too late), and an imperfect wife (mostly indifferent to her weak-willed but otherwise-loving husband, and carrying on an illicit affair with a co-worker).

The rest of it, I’m afraid, was a bit of a let down. The dystopian world imagined in Vox is okay, but quite derivative (it’s The Handmaid’s Tale with a couple of technological gizmos). That world has already been created, written to (many times), surely we can come up with some other way to comment on and critique society? Jean’s role is also just a bit too convenient to swallow. She just-so-happens to be married to a White House official, and just-so-happens to be a leading expert on neuro-linguistics in a world where women aren’t allowed to use language. I mean, come on! Really?

About two-thirds of the way through, Vox goes from feminist dystopia to hackneyed crime thriller. The “big twist” of the government’s “secret plan” was obvious a hundred miles away; I actually got a bit impatient waiting for Jean to figure it out for herself. One-dimensional “bad guys” hold Jean and her research hostage (one of them, I shit you not, actually says “don’t do anything stupid, Jean” at one point). This whole dystopian future was imagined and put down on the page just so that there can be a gun-fight at the OK Corral and a couple of blokes can swoop in to save the day. Ugh!

Just to cap it off, there’s a melt-in-your-mouth happily ever after (yes, I’m going to spoil it, not sorry even a little bit): the loser husband dies in a sudden fit of heroics, and Jean falls into the arms of her lover (to whom she is, conveniently, pregnant). Every “bad guy” is knocked off, and a whole new administration sweeps in overnight and puts right everything that went wrong. As we have all seen by now: it don’t work like that! Double ugh!

One final overarching concern: I really felt a bit icky about the way Dalcher “borrowed” (i.e., appropriated) longstanding symbols of oppression – internment camps, electrical torture, chemical warfare – to build up stakes for a bog-standard thriller. She didn’t even mention trans rights or the “problem” that non-binary people would undoubtedly pose for the Vox regime – a glaring and unforgivable oversight, in my view, one I can’t believe made it all the way to publication. Dalcher clearly had her blinkers on writing this one, and working in two (2) lesbians and one (1) black woman to remind the white narrator about her privilege wasn’t enough to overcome the fundamental flaws in her approach.

As a blurb, Vox is great: I’d love to understand what might happen in a world where women are literally silenced! But it’s a premise in search of a plot that could do it justice. Dalcher would have done better to let this one marinate for longer, maybe come at it with a broader view and a bit more distance from the realities of the past few years. All said and done, if you’re looking for a fresh feminist dystopia, I’m afraid this ain’t it; it might scratch your itch for a crime thriller though, if that’s what you’re after, and there’s a couple of moments with the kids that will pull on your heartstrings.

My favourite Amazon reviews of Vox:

The Art Of Death – David Fennell

8 Books About Women in STEM