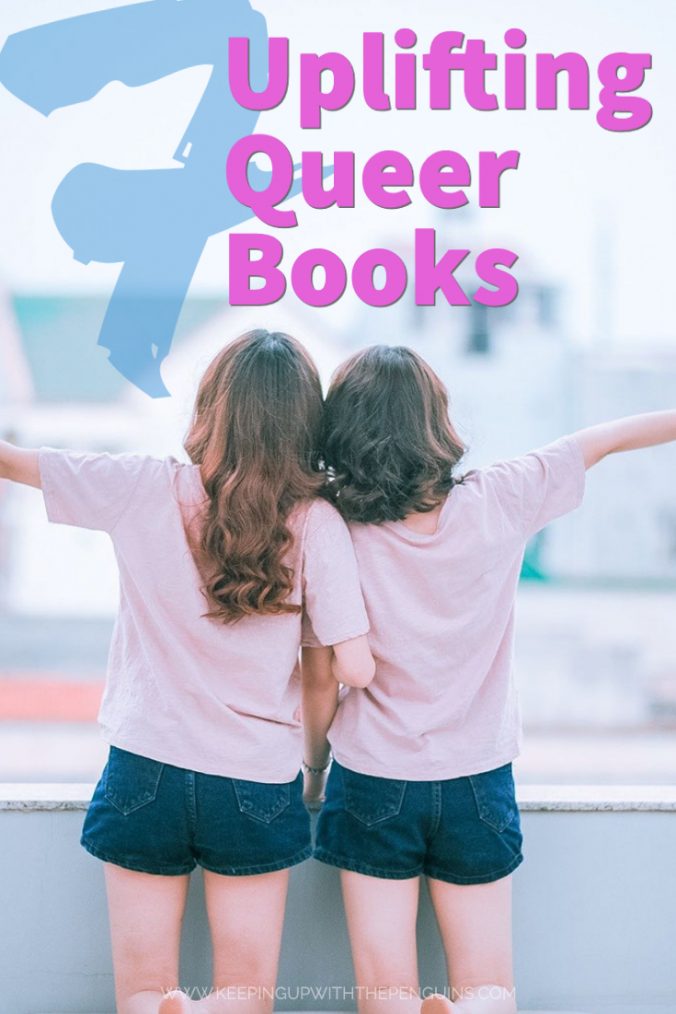 When I started thinking about what queer books I wanted to read for Pride this year, I realised something: nearly every book by or about a queer person on my to-be-read shelf was… well, a huge bummer. A dearth of uplifting queer books in stores and on shelves is a huge problem, and I’m not the only one who’s noticed. While we should definitely make space for stories about the many unique issues that the LGBTIQA+ community face, it’s also important that we see queer folks living their best lives and getting their happily ever afters. Here’s a list of uplifting queer books to read when you need to find a little happy.

Arthur Less is… well, a sad sack. He’s aging disgracefully, his much-younger lover left him, and now he’s desperate to find any excuse he can to get out of going to the wedding of the aforementioned lover to a more-age-appropriate suitor. It might not sound like the stuff of uplifting reads, but Less will warm the cockles of your heart. As you follow Arthur around the world, you’ll find yourself increasingly endeared by his ridiculous self-indulgence (not to mention self-pity). Even if you can’t quite get on board with that, Greer’s satirical skewering of the publishing industry and the creative gig economy is sure to give you a chuckle. Read my full review of Less here.

The Nancys by R.W.R. McDonald

When Tippy Chan’s mother wins a ticket for a two-week cruise, her Uncle Pike and his new Sydney boyfriend return to their small New Zealand hometown to supervise the eleven-year-old. They don’t have the best grip on what’s “appropriate” for children, they don’t object to a mid-morning drink, and they insist on giving make-overs when they’re bored… but Tippy loves them. Together, they form a club – The Nancys – inspired by the Nancy Drew detective novels, in an effort to uncover the truth of what happened in a grisly local crime. This is a hilarious and heart-warming novel about found family and how good life can be on the outside looking in.

I can’t think of a book – queer or otherwise – that has made me snort-laugh more than Me Talk Pretty One Day. No matter the subject, be it his upbringing or his dalliances with performance art or his (mis)adventures learning French, Sedaris’s observational comedy hits a bullseye every time. Though his partner Hugh only gets the occasional look-in, this is a collection of memoir essays dripping with queer sensibility and sass. Sedaris is the brilliant, quick-witted gay uncle/role model we all wish we’d had as a kid. He’ll definitely sneak you booze when your mum’s not looking (but he’ll also write an essay about the ridiculous stuff you say later). Read my full review of Me Talk Pretty One Day here.

One Last Stop by Casey McQuiston

McQuiston’s debut novel, Red White & Royal Blue, was a smash hit (especially for the #Bookstagram crowd). You’d expect a bit of a sophomore slump after such a smash-hit uplifting queer read, but One Last Stop doesn’t disappoint. Cynical twenty-something August is new in the Big Apple, but she’s not expecting fairy tales. Then, she spots a beautiful, mysterious woman on the train, wearing a leather jacket – Jane. Her subway crush becomes the best part of August’s day, but there’s something she doesn’t know about the woman who has captured her cold heart, something that could doom their love story before it even begins… A touching, fun romance that will have you looking like the love-hearts-for-eyes emoji by the end. Read my full review of One Last Stop here.

Simon Vs. The Homo Sapiens Agenda by Becky Albertalli

Simon is your average teenage kid. His family and friends are wonderful progressive people, but he’s still hesitant to come out – it’s a big deal, and he’s not sure he’s ready. He’s got school, he’s got hobbies… and he’s also got a secret, a love affair carried out via email with another anonymous gay kid from his class. Simon Vs. The Homo Sapiens Agenda will take you (gay or straight) right back to the heady intoxication of first love. You’ll be on the edge of your seat all the way through, but in the best possible way: will Simon come out? Who is his secret love? It’s romantic, it’s silly, it’s touching, and it’ll make you smile.

Nevo Zisin finds the concept of “coming out” – the idea that someone is straight until proven otherwise – really bothersome. They should know: they’ve had to do it a lot. Over the course of their young life, they’ve “come out” as bisexual, lesbian, queer, trans, non-binary, and polyamorous… but they’ve done a lot of other stuff too. Nevo is an activist, writer, and public speaker, focusing on issues of gender, sex, and sexuality. Finding Nevo is a warts-and-all memoir about becoming who you are, maybe a few times over. It would be the perfect uplifting queer book for the young person in your life who needs to see that it does, indeed, get better. Read my full review of Finding Nevo here.

On the face of it, Reckoning might not seem like it belongs on a list of uplifting queer books. Magda Szubanski didn’t have it easy: her father was a spy, she inherited some serious trauma, and she spent most of her career hiding her sexuality from the harsh glare of the public eye. But the thing is, Szubanski has a talent for making lemonade from even the bitterest of lemons. Everyone who’s watched her show or seen her comedy knows that she shines bring and lifts the mood of every room she enters. Her memoir is no exception. Pick this one up when you need a dose of real-life inspiration from a queer woman who has been through it all.

Dress Your Family In Corduroy And Denim – David Sedaris