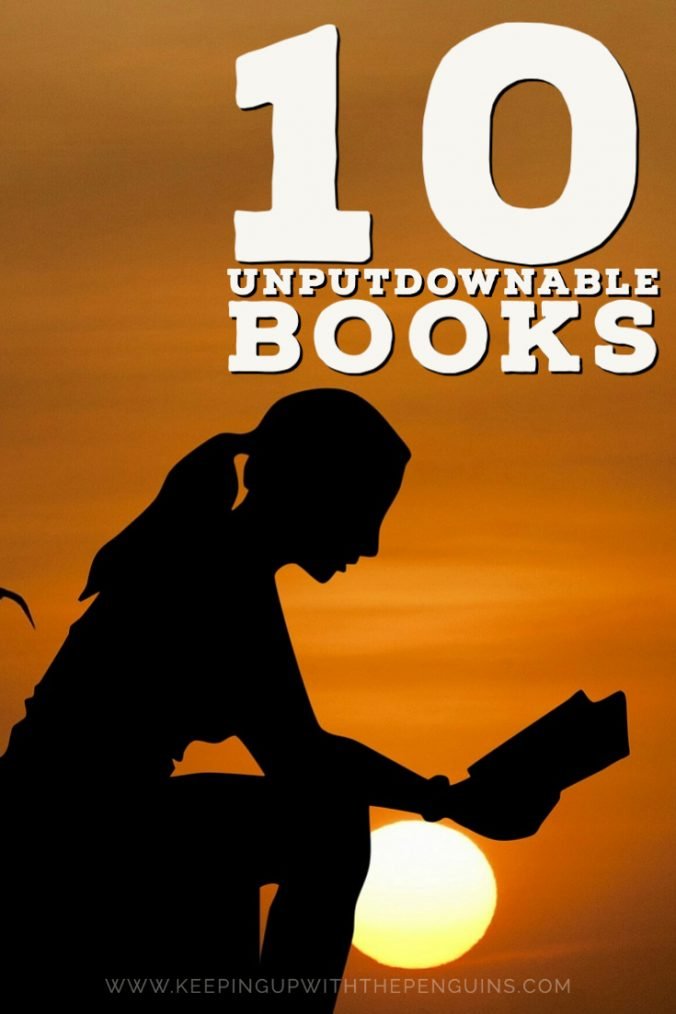 Some books you love, but they’re best read in small doses – a few pages or chapters a day is enough. Others you just have to gulp down without stopping for breath. These are the unputdownable books. They’re compulsively readable, and they’ll keep you up way past your bed-time!

The short, whip-smart essays in Me Talk Pretty One Day will have you just-one-more-ing all the way through to the end. Sedaris splits the collection into two parts: the first about his suburban childhood with his family in North Carolina, and the second about his immigration to France and fumbling attempts to settle in. The deadpan humour and searing insight will suck you in and keep you there. You’ll be snort-laughing on every other page, so it’s best to warn your house-mates or co-workers ahead of time (though be warned, when they see how much fun you’re having with this book you can’t put down, they’ll be on your back to borrow it). Read my full review of Me Talk Pretty One Day here.

Convenience Store Woman is SHORT. Like, seriously SHORT. 163 pages! SHORT! The story moves very fast, and you’ll be done before you remember to come up for air. This unputdownable book follows Keiko, the “not-normal” thirty-something woman who is completely satisfied with her life. She’s single and works in one of Japan’s 56,000 convenience stories. If only her friends and family were satisfied with her life choices, too. She bows to their pressure to find a man and “act normal”, but (of course) it all goes topsy-turvy. This is a fun and provoking read that you’ll tear through in a single afternoon. Read my full review of Convenience Store Woman here.

True crime books are by default particularly gripping: there’s the horror of knowing that all of this really happened, and the compulsion to see the bad guy get what’s coming to them. No book encapsulates this emotional potpourri better than a classic of the genre, Truman Capote’s In Cold Blood. Capote travelled down to Kansas, his best bud and assistant Harper Lee in tow, and spent years sticking his nose in everyone’s business. The result is a panoramic view of what happened the night that Richard Hickock and Perry Smith killed the Clutter family, and the subsequent investigation into their heinous crime. Read my full review of In Cold Blood here.

Sometimes, it’s a protagonist that captures your heart and makes a book truly unputdownable. The titular character of A Man Called Ove is, well, a man called Ove, and this curmudgeonly depressed 59-year-old will pull on heartstrings you didn’t even know you have. Ove is on the brink of taking his own life when he hears a loud crash; his new neighbours have knocked over his mailbox trying to back a trailer in to their new home. It doesn’t sound like the stuff of heartwarming tales, but I promise you, it is. Ove’s story is a deeply affecting and poignant reminder that you can never truly know someone’s story just by looking at them. Read my full review of A Man Called Ove here.

The graphic novel format is another that lends itself well to propulsive unputdownable reading. My personal favourite is Good Talk, Mira Jacob’s deft and intimate exploration of race and racism in the context of everyday conversations. It all begins when her son innocently asks a question about Michael Jackson; that interaction prompts Jacob to think – and draw, and write – about all kinds of awkward encounters she’s had over the course of her life in brown skin. The artwork is truly beautiful, and serves to accentuate an amazingly honest portrayal of the lived experience of racism. Read my full review of Good Talk here.

From page one, The Underground Railroad depicts the gruesome realities of the slave trade and enslaved lives in the antebellum South. Every chapter reveals some new horror. So much of what happens to the characters is gut-churningly awful, and yet… it’s compelling, and propulsive. I read a review on The Guardian that described it as “beautifully written and painful to read”, which is probably the best way to describe it. (Obama also called it “terrific”, if that recommendation has any sway with you!) The Underground Railroad is not a light or easy read, but it’s unputdownable all the same. Read my full review of The Underground Railroad here.

She Said by Jodi Kantor and Meghan Twohey

Sometimes, a non-fiction book is every bit as gripping and gut-twisting as the very best crime thriller: such is the case with She Said by Jodi Kantor and Meghan Twohey, the journalists who broke the Harvey Weinstein story. That abhorrent man went to unbelievable lengths to keep them from giving voice to his victims, and Kantor and Twohey had nerves of steel going up against him. Their dogged persistence and determination in the face of seemingly insurmountable odds will have you holding your breath, powering through every page to see justice done. An unputdownable book about the #MeToo movement and the world’s reckoning with the harm inflicted by powerful men. Read my full review of She Said here.

Big Lies In A Small Town by Diane Chamberlain

Initially, I took one look at Big Lies In A Small Town and thought “ugh, another domestic thriller pot boiler, snooze”. Lies are the new Girls in book titles, after all. But, once again, there’s something to that whole not-judging-a-book-by-its-cover thing. The story centers around a Depression-era mural: the woman commissioned to paint it (who disappeared under mysterious circumstances), and the woman charged with restoring it for installation, nearly eight decades later. It’s a captivating story told well, making this unassuming popular fiction book absolutely unputdownable! Read my full review of Big Lies In A Small Town here.

When it comes to a book’s premise, they don’t get much bolder or more ambitious than Andy Weir’s The Martian. An astronaut finds himself stranded, alone, on Mars, with only a month’s worth of supplies and possibly years away from help and rescue. It sounds like it should be depressing, and maybe a touch beyond the pale, but the narrator, lovable and hilarious and brilliant Mark Watney, will get you on-side immediately. His (usually) positive attitude and pragmatic approach to “scienceing the shit” out of his predicament will have you tearing through the pages of this contemporary sci-fi gem, desperate for him to get home safely. Read my full review of The Martian here.

The Kiss Quotient by Helen Hoang

Sex sells, as the saying goes, and Helen Hoang knows just how to capture your attention and keep it in The Kiss Quotient. Stella is a successful woman who loves her work as an econometrician and is generally happy with her life. She isn’t particularly fussed on men and dating, but her parents are really putting the pressure on to get herself sorted out in that regard. What’s the most rational way to go about improving her skills (social and… otherwise? *wink, wink*)? Hire an escort, of course! Enter Michael, the gorgeous escort she finds online, who will teach her how to date and fuck like the best of them. In between the steamy scenes there are truly touching moments, and interesting insights into what it’s like to live and love and date outside the norm. Read my full review of The Kiss Quotient here.