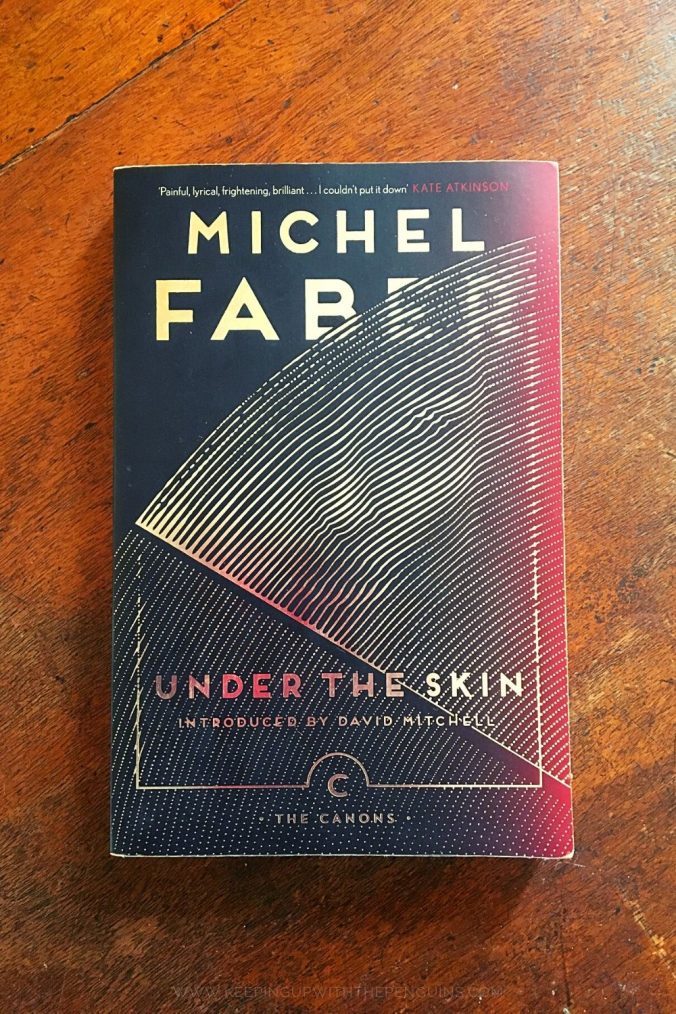 Under The Skin – Michel Faber

It feels strange that Under The Skin was published more than two decades ago (original pub. date: 2000), perhaps because the premise is so futuristic. It was Michel Faber’s debut novel, and while I don’t remember it making a huge splash at the time, it seems to be having a bit of a resurgence of late. If you’re looking for a sci-fi(ish) read for spooky season, this one’s the money!

My edition of Under The Skin includes an introduction by David Mitchell. He hints at, but doesn’t outright spoil, the big twists of the plot. That’s a great kindness to the reader who reads the introduction first (that’s me!), but unfortunately it means he can’t say much other than “this book is really good, read it to find out why”. I can’t promise the same kindness in this review, so consider yourself warned: Under The Skin spoilers abound…

The story is set on the east coast of northern Scotland. I mention it first, because even though it’s not the focus of the novel, the setting is really beautifully written. Faber manages to bring the cold coast of Scotland to life on the page.

He feeds you the facts of the story gradually. At first, the protagonist – Isserley – seems like a regular woman… albeit, one who gets her kicks having sex with male hitchhikers.

Then, she starts to seem like she might enjoy it a bit too much. Is she a sex addict?

Or maybe she’s murdering them.

Or maybe she’s luring them to a farm so that someone else can murder them.

Wait, what the hell is going on here? (You get the idea.)

Slowly – oh, so slowly – Isserley is revealed to be an extraterrestrial, driving up and down the A9 and picking up lonely himbo hitchhikers for her interplanetary bosses. The “farm” on which she lives is a processing facility. Yes, Under The Skin takes a dramatic Tender Is The Flesh turn, just past half-way through. The aliens are hungry, and Earth is their farm. Gah!

Isserley has been surgically ‘mutilated’, as she puts it, to lure these men to their deaths. She’s been given a magnificent set of breasts (of course), and her spine altered so that she can walk on two legs. In their natural form, she and her comrades are more canine in nature, walking on all fours with a tail for balance, and covered in fur. They consider themselves to be the ‘human beings’, and the people of Earth (which they call vodsels) mere animals.

If you speak passable Dutch, the use of the name vodsel is a spoiler in and of itself, actually – it means “food”. The steaks from the fattened and mutilated vodsels are called voddissin, an expensive delicacy on Isserley’s home planet.

Isserley’s rigorous professionalism and conscientiousness take a hit when she is sexually assaulted by one of the hitchhikers she picks up. And so begins Under The Skin‘s denouement. She becomes disillusioned with her job, especially once she demands to see the processing of the vodsel she captures, and meets a rich boy from her home planet who advocates vehemently for ‘vegetarianism’ (or the alien equivalent, anyhow).

She decides to quit her job, but avoid returning to her home planet (where she faces a life of wretched poverty and deprivation). She wants to stay on Earth, a comparatively bountiful planet with beauty and water and food and all the other things that make life worth living. Faber has one last surprise in store for Under The Skin readers: Isserley’s escape is short-lived. She gets into a car accident with one last hitchhiker, and is forced to self-destruct her vehicle (which will surely kill her in the process) in order to escape detection by the Earth authorities. It sounds gruesome and sad, but it’s actually a surprisingly beautiful ending to a strange and eerie book.

So, as you can see, Faber touches on a lot in Under The Skin. Sexism, factory farming, animal rights, classism, sexual violence, sexual identity, humanity, empathy… It’s bound to make you desperately uncomfortable at times, and maybe second-guess your choice of steak for dinner.

I’ll leave it to the more committed genre readers to comment on its chops as a sci-fi story, but I certainly found myself transported by it. Faber used a lot of the stock-standard sci-fi tropes to make an interesting – if obvious – philosophical point. The first half is creepy as all heck, the second half is like opening a front-facing camera on humanity. I’d say, all told, Under The Skin‘s resurgence is well deserved and well-timed.

P.S. If you’re wondering how it compares to the 2013 movie of the same name starring Scarlett Johansson, apparently it doesn’t. I haven’t seen it, but the reviews would suggest that the director played fast and loose with the idea of ‘adaptation’.

My favourite Amazon reviews of Under The Skin: