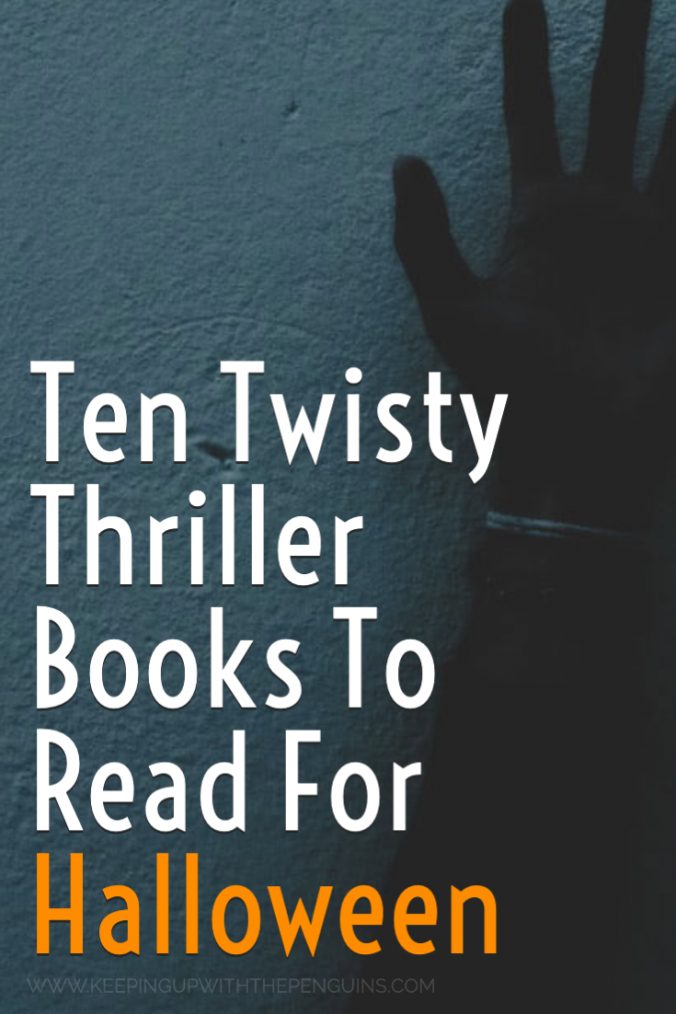 I was never really THAT into Halloween, for a few reasons. First off, I grew up in Australia, where the idea of dressing up and trick-or-treating is relatively new. Before it took root here, all I knew about Halloween was what I’d gleaned from Babysitters Club books and Mean Girls. Secondly, I’m not one for the supernatural; I don’t believe in spooks, I don’t believe in spooks, I don’t, I don’t, I don’t. And third, I’d much rather be curled up with a good book than hand-sewing a costume or traipsing around the streets begging for chocolate… but why should that mean I miss out on all the fun? Here are ten twisty thriller books to read for Halloween (with no witches or werewolves or wraiths).

Notes On A Scandal by Zoe Heller

My opinion might’ve been swayed here for the fact that I saw the fabulous film adaptation (starring Dame Judi Dench and Cate Blanchett) before I discovered it was based on a book… but Notes On A Scandal (also called What Was She Thinking?) totally holds up in both formats. A beautiful, young teacher is busted having an illicit affair with a student. Luckily, her older colleague and self-appointed bestie is on her side, and leaps to her defense. But their friendship is not at all what it seems… Read my full review of Notes On A Scandal here.

Under The Skin by Michel Faber

Why is a woman cruising the roads of the Scottish highlands picking up hitchhikers? Why does she get them to open up to her, divulging their innermost thoughts and their deepest desires? Clearly she’s up to no good… but what kind? Under The Skin is probably the strangest of the twisty thriller books on this list (some might not call it a thriller at all), but I couldn’t help but include it! It’s one that will linger long after you turn the final page. Read my full review of Under The Skin here.

What is it that is so inherently creepy about young children? Is it their tiny hands, their needling voices, their fierce (sometimes manipulative) spirits? Normal children are no picnic, but Zoje Stage has created the ultimate villain in Baby Teeth. Seven-year-old Hannah is her Daddy’s little girl, an angel who can do no wrong, but her mother worries their daughter has a (very) dark side. When the battle of the wills between mother and daughter comes to a head, you won’t be able to look away.

The Van Apfel Girls Are Gone by Felicity McLean

Maybe it makes me a philistine, but I’ve got to say I prefer The Van Apfel Girls Are Gone to the classic Australian novel that inspired it. Imagine Picnic At Hanging Rock with the contemporaneity and eeriness of The Virgin Suicides, and you’ll get close to The Vibe of this one. Sisters Ruth, Hannah, and Cordelia vanished in the summer of 1992 – is it a runaway gone wrong, or were they taken? What has become of the girls they left behind? You’ll have to read on to find out.

If you like your twisty thriller books to err on the side of the literary, I’m Thinking Of Ending Things is the one for you. It’s incredible that such an intense psychological suspense novel came from the pen of a debut author. In it, a young woman – despite her misgivings about her relationship – agrees to join her boyfriend on a road-trip to meet his parents. They’ve only been together a few months but, as the title suggests, she’s thinking of ending things. Will she get the chance?

The Chain by Adrian McKinty

As soon as I read the blurb of The Chain, I knew I had to have it. Rachel Klein drops her daughter at the bus stop, just as she does every morning, but this time she gets a phone call from an unknown number. A woman tells her she has abducted Rachel’s daughter, and the only way to get her back (alive) is to pay a ransom, abduct another child herself, and await instructions. Rachel isn’t the first, and it’s up to her whether she’ll be the last. This twisty thriller book will push ethical and moral boundaries you didn’t know you had.

I’ll admit, I stumbled across Perfume because of the strangest Venn diagram ever: I’m a booklover who used to work in a perfume store, so I spent a lot of time looking for books about fragrance. This is not what I expected to find, and I’m not sure it’s right to call any of these twisty thriller books a “pleasant surprise”, but… Anyway, this one is about a man in 18th century Paris with one remarkable trait: an impeccable sense of smell. He’s obsessed with capturing scents, and that obsession leads him down a very dark road.

Call Me Evie by J.P. Pomare

In the isolated beach town of Maketu, Uncle Jim tells Evie that they’re in hiding, that he’s protecting her from the consequences of something terrible she did back in Melbourne. Only, he isn’t really her uncle, and her name isn’t really Evie. The thing is, Evie can’t remember the truth of what got her here – she only knows that she’s determined to find out. My eyes might have skipped over Call Me Evie on a shelf of twisty thriller books, but I was drawn to it after listening to an amazing interview with the author, J.P. Pomare. He went to great lengths to ensure this book was as realistic and chilling as possible, and the results speak for themselves!

A few months ago, if you’d asked me whether I recommended Gone Girl, I probably would have scoffed and told you it was the basic bitch of twisty thriller books. Reader, consider this me eating my words (which taste, funnily enough, like humble pie). Amy and Nick seem to have the perfect marriage, until the morning of their fifth anniversary. Amy disappears. Did Nick have something to do with it? The police sure think so. But can either of them be trusted to tell the truth about that day, about their lives together? Don’t be fooled by the “big reveal” halfway through: there’s plenty more to come! Read my full review of Gone Girl here.

The Turn Of The Key by Ruth Ware

I’d seen The Turn Of The Key by Ruth Ware billed as a modern-day Turn Of The Screw. Now, I’m not a Henry James fan (far from it!), but that description drew me in: it’s a story ripe for adaptation! A governess alone with weird children in an isolated house, complete with bitter housekeeper, mysterious caretaker, and unexplained bumps in the night? Yes, please! Don’t worry, I’m not sneaking a creepy paranormal thriller in right at the end: all will be revealed, and it will be banal and terrestrial… but isn’t that the most chilling reveal of all? Read my full review of The Turn Of The Key here.