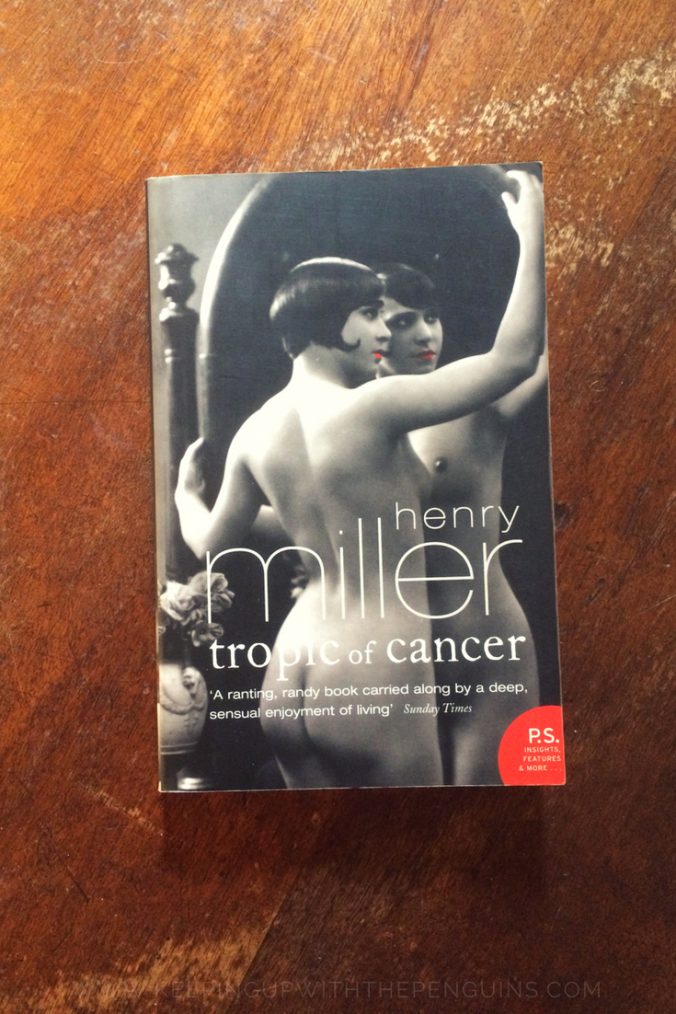 This is it, people: the one we’ve all been waiting for! Get yourselves a glass of wine and strap in, because after dozens and dozens of books, after a year of searching, I have finally found it: some decent literary smut! If that’s not your thing, look away now, because I tell you what – Henry Miller’s Tropic Of Cancer had me clutching my pearls.

To understand Tropic Of Cancer, you really need to understand the life and times of Henry Miller. See, Tropic of Cancer, much like The Sun Also Rises, and On The Road, is what we call a roman-à-clef (which is a fancy way of saying that Miller wrote a diary and just changed a few names before he published it). Miller grew up in the States, born in 1891 to German-speaking parents and only learning to speak English fluently during his school years. As an adult, he had – shall we say – a complicated romantic life. By way of example, at one point he had an affair with his first wife’s mother. He supported himself through a string of odd-jobs until his second wife took him to Paris. There, she encouraged him to begin writing, and he threw himself whole-heartedly into a life of bohemian squalor. Paris was the place for it, after all; the city was chockers full of debauched artistic types (Hemingway, Joyce, and Beckett all hung out there during the same period), so he had plenty of company.

As he was writing Tropic Of Cancer, his first book, he began a torrid affair with Anaïs Nin (and it was her diaries, published later, that made celebrities of them both). Then, a plot twist: Miller’s wife began an affair with Nin as well. Unsurprisingly, they divorced in 1934, the same year that Tropic Of Cancer was published.


It was an interesting conflation of circumstances that led Tropic Of Cancer to even see the light of day. Firstly, it was the editorial support of Nin – not to mention her financial backing – that got the manuscript to a publishable standard. But even with her guidance and injection of cash, there was the matter of finding a publishing house that would take it on. That’s where the legendary laissez-faire attitude of the French saved the day. See, British and American publishers were constrained by tight obscenity laws and unwilling to take risks on “dirty books”, while the French – predictably – did not give a shit. As such, Tropic Of Cancer was published in Paris for the first time in 1934, but it did not reach the English-speaking world until 1961, after many lengthy legal battles.

I bet you think I’m overstating it. How could a book possibly be so filthy that it warranted 30 years of controversy? Consider the opinion of Pennsylvania Supreme Court Justice Michael Musmanno, who said that Tropic Of Cancer is “… not a book. It is a cesspool, an open sewer, a pit of putrefaction, a slimy gathering of all that is rotten in the debris of human depravity.”

Given that that’s the case, I’m sure you won’t be surprised to learn that I fucking loved it!

“It is now the fall of my second year in Paris. I was sent here for a reason I have not yet been able to fathom. I have no money, no resources, no hopes. I am the happiest man alive.”

Tropic Of Cancer isn’t a stream of consciousness, but it’s something adjacent to it. It is set in France during the late 1920s and 30s, focusing on Miller’s life as a starving artist. There’s no real linear narrative, and Miller fluctuates fluidly through the past and the present and his philosophical musings on life. It’s basically a string of anecdotes about his friends, lovers, work, life, and neighbourhood, with the occasional epiphany and some fun facts thrown in.

“The physiology of love. The whale with his six-foot penis, in repose. The bat-penis libre. Animals with a bone in the penis. Hence, a bone on… ‘Happily,’ says Gourmont, ‘the bony structure is lost in man’. Happily? Yes, happily. Think of the human race walking around with a bone on. The kangaroo has a double penis – one for week-days and one for holidays.”

And, yes, there is a lot of filth. I can see why the conservatives kicked up such a stink (which is unusual for me – usually, I’m left wondering what could possibly have caused such offence). I did notice, though, that Miller really writes more about hunger and food than he does about sex. I assume that’s because, well, most bohemians were homeless and starving. Nin once observed to Miller that “in Tropic Of Cancer you were only sex and a stomach”, and that is probably the best assessment of this book that anyone has ever made.

The sex and debauchery that he does describe seems more angry than lustful. It’s abundantly clear that he was trying to make a point, moreso than titillate the reader (not that he was opposed to a bit of titillation, mind you – he and Nin both made their pocket money writing erotica to order, mostly for private collectors). I read some commentators say that the pornographic passages “no longer shock” the modern reader, but I’ll happily stick up my hand and say that references to inserting reptiles and rodents into a woman’s rectum were still pretty damn confronting for me.

There’s also a lot of quibbling among the various readers and critics as to whether Miller was a misogynist, and whether Tropic Of Cancer was a misogynistic book. I’m sure he was, to an extent, but to me most of the woman-hate-y passages read as so tongue-in-cheek that I couldn’t imagine even Miller himself taking them seriously. Plus, the men in the book were hardly a picnic. I keep coming around to the same question: does it matter? Whether Miller hated women seems to be largely beside the point. What matters more is whether today’s reader can think critically about his misogynistic portrayal – real or imagined – in a contemporary context. I’d hate to think that some incel fuck-knuckle would read this book and use it to justify his hatred of women, but I’m also a firm believer in “you don’t read the book, the book reads you”. Misogynists will find misogyny in anything they read, regardless of the author’s intent, and that’s that.


There is a sequel, Tropic of Capricorn, published five years after Tropic Of Cancer, and it too was banned in all English-speaking countries for nearly 30 years. It actually covers an earlier period in Miller’s life, so I guess that makes it a “prequel” more than anything. When the two books finally reached the English speaking world, together, Miller became a household name. He was hailed by the Sixties counter-culture as a “prophet of freedom and sexual revolution”. Or, in my own words, Miller did what Kerouac did, but better than Kerouac did it, while Kerouac was still in grade school.

I couldn’t possibly recommend this book blindly. It’s too smutty, and Miller makes liberal use of the c-bomb and all other manner of creative profanity. Tropic Of Cancer is artistic and esoteric, in the extreme. So, if the appeal of Paris for you is strolling the Champs E’lysses and taking in high fashion and fine art while munching on croissants, this is not the book for you. If, on the other hand, the idea of filth, hunger, homelessness, squalor, and despair gets your motor running, and dying in a Parisian gutter of venereal disease sounds romantic, then Tropic Of Cancer is probably just your speed. Guess which camp I fall into… 😉

My favourite Amazon reviews of Tropic Of Cancer:

14 Great Bookstagram Accounts You Should Really Be Following