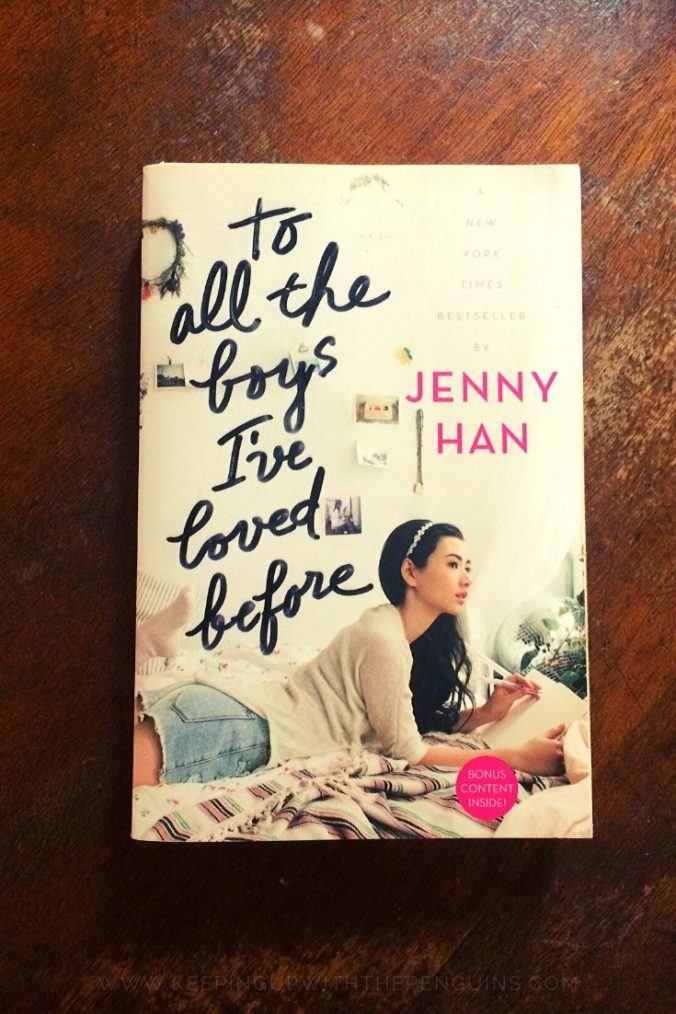 To All The Boys I’ve Loved Before – Jenny Han

For a fluffy young-adult rom-com, To All The Boys I’ve Loved Before has a spine-chilling premise. Lara Jean has written a letter to every boy she’s ever loved (five total), letters that were supposed to be for her eyes only… until one day, under mysterious circumstances, the letters are mailed to the boys in question. It’s every teen girl’s worst nightmare; even now, slightly (ahem!) past my teenage years, I shudder at the thought. But don’t let that put you off! It sets the stage for a thoroughly delightful read.

To All The Boys I’ve Loved Before was first published back in 2014. I’d already seen the Netflix adaptation, but I figured if the book was anywhere near as charming and endearing, it’d be worth reading. Han has said her story was inspired by her own habit of writing love letters (never mailed) to the boys she had crushes on as a teenager. For Lara Jean – and presumably for her creator – the letters are cathartic, a way to “let go” and farewell the boys she has no future with (including her sister’s boyfriend – eek!).

Sure, the romance is the central plot, but equally essential to this novel is Lara Jean’s family. Her mother is, sadly, dead, but she is very close to her father and sisters. Margot is the elder, headed off for university in Scotland, and Kitty is the younger, annoying at times but wise beyond her years. Josh – the aforementioned boyfriend of Margot – is practically part of the family. He lives next door and he often joins them for dinner and family events. He is also (prepare yourself for a stomach-churn) an unintended recipient of one of Lara Jean’s letters.


What’s a girl to do? Throw everyone off the scent by plunging head-long into a fake relationship, of course! Another recipient of a letter, Peter Kravinsky, is the “cool guy” of Lara Jean’s high school. He’s also recently broken up with his own girlfriend. They mutually agree to carry on as though they’re in a relationship. Lara Jean hopes it will prove to Josh that she’s moved on (and stop Margot cottoning on to the fact that she was secretly lusting after him the whole time, plausible deniability is the name of the game!), and Peter just wants to make his ex-girlfriend and resident Mean Girl, Gen, jealous.

Will it come as any shock if I tell you that this perfect plan goes horribly awry? Of course not! Of course it does! And everyone involved gets their feelings at least a little bit hurt. Such is the nature of young-adult romances. And yet, To All The Boys I’ve Loved Before – predictable and sweet as it might be – never once feels like a cliche. It’s never cloying or annoying. I mean, if you’re determined to be a real grouch, I suppose you could look down your nose at it, but boo to you!


Given the dire state of the world, and our collective desperation for a little escapism, To All The Boys I’ve Loved Before is the perfect read for the current moment. It’s sweet, it’s nostalgic, no one has to wear a mask or sing Happy Birthday as they wash their hands… Lara Jean’s internal monologue feels real. So. many other YA novels I’ve read sound like an adult simply parodying the way they think teenagers speak “nowadays”, which is patronising to say the least. To All The Boys I’ve Loved Before, however, hits the mark – a bullseye! Ah, to be young and in love…

The initial release spent 40 weeks on the New York Times Young Adult Best Seller List, and went on to be translated and published in over 30 languages. It got another boost upon the release of the Netflix adaptation in 2018 (which, I’m pleased to report, was mostly faithful to the book). There have since been two sequels, too: P.S. I Love You in 2015 (now with its own Netflix treatment, too), and Always And Forever, Lara Jean in 2016. I’m not sure I’m hooked enough to seek those out, but I wouldn’t discourage anyone from doing so. On the whole, I thoroughly enjoyed this one, and I would highly recommend it to anyone who needs to be reminded that life can be good and sweet.


My favourite Amazon reviews of To All The Boys I’ve Loved Before: