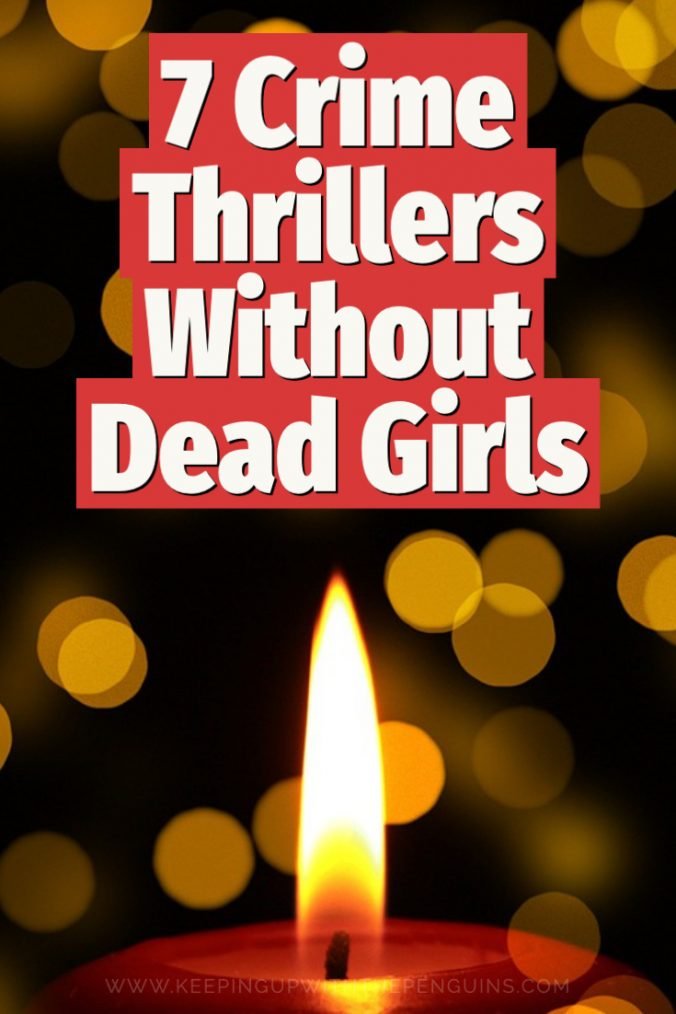 If you read contemporary crime thrillers or horror fiction, you’ve probably noticed a problem that ranges from mildly annoying to downright disturbing: nearly every “victim” that kicks things off is a dead, dying, or missing girl. These girls are blonde, thin, white, sometimes angels, sometimes “troubled”, and they’re almost always completely interchangeable. You could write an entire thesis on the reason for this (some brilliant academics have, and even Edgar Allen Poe took a shot). Sure, sometimes thrillers subvert this trope and turn it on its head (hello, Gone Girl), but even so, it’s nice to stumble upon a thriller without a dead girl as an inciting incident. Here’s my list of seven thrillers without dead girls.

The Hiding Place by Jenny Quintana

I didn’t realise how relieved I was to finally pick up a thriller without a dead girl until I read Jenny Quintana’s The Hiding Place. Also notably (blessedly!) absent: hard-boiled heavy-drinking detectives with a dark past, ticking time bombs, and ex-boyfriends with a knack for coercive control. The story centers on Marina’s search for the truth surrounding the circumstances of her birth. As an infant, she was found wrapped in a blue shawl in the doorway of 24 Harrington Gardens, in a quiet London suburb. Now, as an adult, she can’t resist the allure of one of the apartment at that address for let, and the opportunity to find out what exactly happened to her birth mother. This is a compelling page-turner without the tired tropes. Read my full review of The Hiding Place here.

Even though the victim of the crime at the center of Big Little Lies is a mystery for most of the novel, I hope it doesn’t spoil it too much to say that, in the end, it is a pleasant surprise to discover it is not one of the three women protagonists. Liane Moriarty has worked up quite a back-list of books, most of which do not center on dead, dying, or missing girls. Granted, this one still features prominent themes of sexualised violence against women, but the crime at the heart of the novel isn’t the one you’d expect. Read my full review of Big Little Lies here.

Bonus: Moriarty’s most recent novel, Apples Never Fall, is also a cracking thriller without a dead girl. The matriarch of the family is missing, sure, but Moriarty uses her mysterious absence to point to the flawed assumptions we’re all guilty of making in such a scenario. Read my full review of Apples Never Fall here.

My Sister, The Serial Killer is not a traditional thriller by any stretch, but it has a serial killer on the loose with a reluctant accomplice, so I say it counts – and all the victims are men. When Korede’s beautiful butter-wouldn’t-melt sister, Ayoola, forms a nasty habit of bumping off boyfriends who displease her, it’s Korede’s job to cover up her crimes… until Ayoola sets her sights on the man Korede has been secretly crushing on for months. It lands on the literary end of the crime thriller spectrum, but it’s one of the best thrillers without dead girls I’ve read so far, with impeccably drawn characters against a bustling Nigerian backdrop. Read my full review of My Sister, The Serial Killer here.

Under The Skin by Michel Faber

For a thriller with a science-fiction bent and without dead girls, look no further than Under The Skin. In this strange, seductive story, Isserley cruises the Scottish highlands, picking up hitchhikers off the side of the winding roads. All of them are male, and she appraises them carefully, making sure they’ll be suitable for her purpose. And that purpose might be… well, you’ll have to read on to find out. Suffice to say here, Isserley is not your standard criminal, and these aren’t the kind of crimes you see splashed across the morning news headlines. This is a hypnotic and entrancing read. Read my full review of Under The Skin here.

I first encountered The Cry via the brilliant can’t-get-it-out-of-your-head-for-days ABC/BBC television adaptation that first aired a couple of years ago. Seriously, it’s SO GOOD! How thrilled was I to discover that the story also exists in novel form, the book by Helen Fitzgerald five years prior. In this gripping, still-can’t-shake-it-off read, an infant goes missing shortly after his British parents bring him to Australia, sparking an international search and unprecedented media attention. When no trace of the child is found, the parents, Joanne and Alistair, slowly turn on one another, making for an incredibly affective and effective psychological thriller. Read my full review of The Cry here.

The premise of Misery is so twisted, it could only have come from the mind of the King of Horror. He’s normally not shy about writing thrillers with dead girls, but he comes at this one from a very different angle. In it, a forty-something writer, with shelves of lowest-common-denominator best-sellers to his name, finally types The End on his literary triumph, only to find himself badly injured in a horrific car crash. “Luckily”, he is “rescued” by his “Number One Fan” – Annie Wilkes. This axe-wielding former nurse might be demonstrably insane, but she has a steady supply of painkillers, an at-home recuperation set-up, and only one demand: that the author write one more book, a very special book, just for her. Read my full review of Misery here.

The Silent Patient by Alex Michealides

To round out this list of thrillers without dead girls, let’s look at The Silent Patient. The “girl” (ahem-woman!-ahem) at the centre of this story is the kind of “troubled” character you’d expect to be bumped off in the first few pages, except in Michaelide’s version she’s the one wielding the weapon. Alicia Berenson seemed to have the perfect life, right up until she shot her husband five times. Why? Well, she’s not saying; she hasn’t spoken a word since she got trigger-happy. The mystery captivates the world, especially forensic psycotherapist Theo Faber. He’s determined to get Alica to talk. But will that do more harm than good?