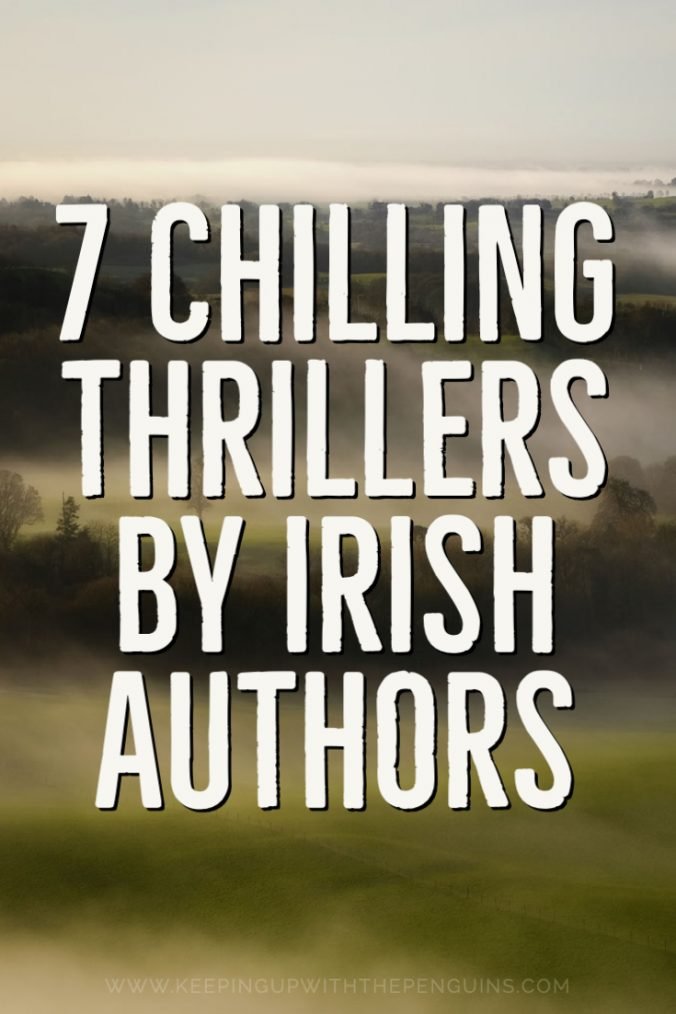 Ireland: rolling green fields, pints of Guinness, the occasional sectarian conflict, and no snakes anywhere. We have a very romantic view of the Emerald Isle, but I’ve realised lately that they’re pumping out some of the best thrillers in recent years. Forget about your Scandi noir and your Southern Gothic novels: these thriller books by Irish authors are going to chill you to your bones.

Do you remember the story of Josef Fritzl? He’s the Austrian man who held his daughter Elizabeth and three of their children (ick) in captivity, locked in a concealed area of their family home, for decades. That sick, sad story is the inspiration for Emma Donoghue’s Room, one of the most inventive Irish thriller books of this century. The story is told from the perspective of Jack, a five-year-old boy who was conceived, born and raised in a single room, he and his mother held captive by a menacing villain they call Old Nick. Jack’s age, and his mother’s protective oversight, prevent him from fully realising the horrors of his situation – but the readers definitely do. Read my full review of Room here.

The Nothing Man by Catherine Ryan Howard

When she was just twelve years old, Eve Black was the only member of her family to survive an attack by the serial predator known as The Nothing Man. Now, in adulthood, she’s determined to find her attacker’s true identity. Jim, a supermarket security guard, reads her true crime memoir with great interest. He’s not just a Nothing Man groupie – he is The Nothing Man. Eve doesn’t know how close she’s come to stumbling on the truth, but Jim does, and he’ll have to stop her from piecing it all together. This is one of those high-concept Irish thriller books that will haunt your nightmares.

Only Ever Yours by Louise O’Neill

Even before I started bingeing Irish thriller books, I read the blurb for Only Ever Yours and knew I had to read it. In a world in which baby girls are no longer born naturally, women are bred in schools and trained in the arts of pleasing men until they are ready to graduate. The lucky ones are chosen as brides and expected to breed; the rest are relegated to the roles of concubine or teacher. Best friends Freida and Isabel are determined to stick together, wherever their paths take them, but when Isabel’s body starts to change and she becomes a less desirable bride, the bounds of Freida’s loyalty are tested.

The Likeness by Tana French

If any Irish author’s name is synonymous with good reliable crime thrillers, it’s Tara French. She’s won herself legions of fans with her Dublin Murder Squad series, and Irish masthead The Independent calls her “the First Lady of Irish Crime”. My pick of her impressive backlist is The Likeness, an almost-ridiculous doppelgänger story of murder and subterfuge. Detective Cassie Maddox is called upon to investigate the murder of Lexie Madison, a young woman identical to her who was apparently living under the alias Maddox used in a previous case. The only way to find her killer is to slip into Lexie’s shoes, but the detective struggles to keep the boundaries between her and the victim from blurring.

Many thriller readers don’t turn to the classics for their fix, and that’s a real shame! Some of the best Irish thriller books are buried in the canon. Dracula is possibly the most iconic, the spooky story of a vampire chasing his victims across Europe by Irish author Bram Stoker. The prose is surprisingly contemporary, told in an epistolary style through letters, diaries, and other fictionalised documents. Plus, there’s a sweet love story as a side-plot, between newlyweds Jonathan and Mina. Ladies swoon, fellas grab their weapons, and the story culminates in a heart-racing chase to nail the bad guy to the wall before it’s too late. Read my full review of Dracula here.

Catherine Ryan Howard is the queen of high-concept Irish thriller books – that’s why she features on this list twice! 56 Days is scary in more ways than one. It follows the story of a new couple forced to move in together (hold on to your knickers) by the nationwide pandemic lockdown of 2020. Be prepared for the plot points of stockpiling supplies and silent streets to trigger flashbacks! On top of that, neither party to the couple is exactly who they have represented themselves to be. This is a well written, well paced Irish thriller with tantalising clues and a couple of truly excellent fake-out twists. Read my full review of 56 Days here.

The Chain by Adrian McKinty

It’s a stock-standard opener for a thriller: a phone call, and a chilling message on the other end of the line… but The Chain has a darker twist than even I could fathom. The call comes for Rachel Klein shortly after she drops her daughter at the bus stop, as she does everyday. But the voice on the other end isn’t a criminal mastermind, or a trafficking ring honcho: it’s another mother whose child has been taken. The only way she will release Rachel’s daughter is if Rachel kidnaps another child, and pays the ransom. Rachel is part of the Chain now, where the victims are forced to become criminals, and there might be no way out.

In The Margins – Elena Ferrante