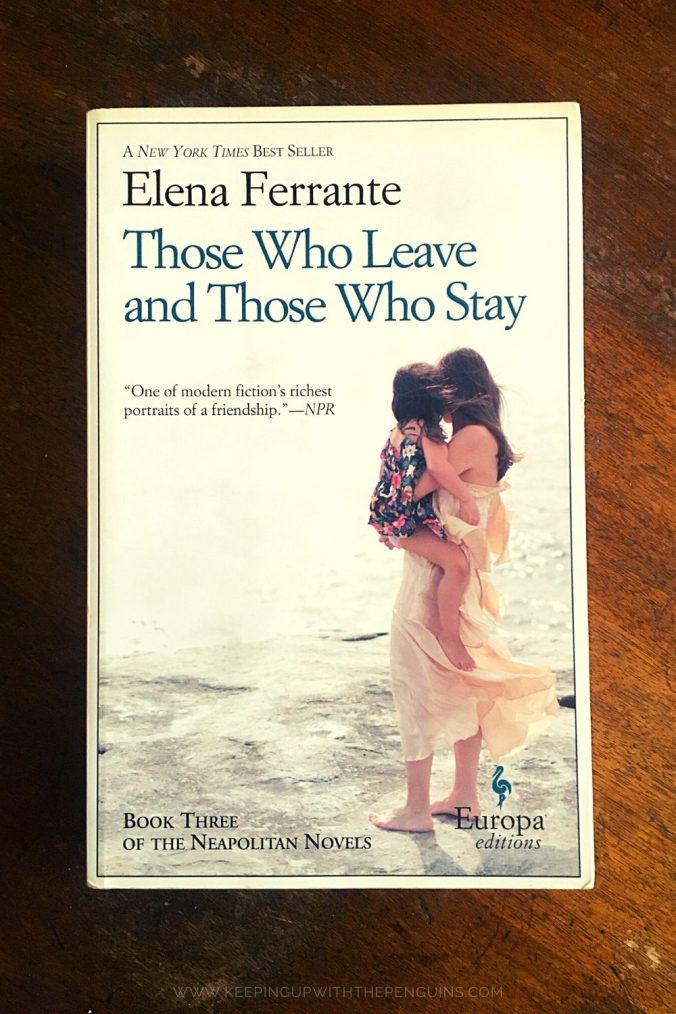 Those Who Leave And Those Who Stay – Elena Ferrante

I am gradually making my way through Elena Ferrante’s Neapolitan novels (see my thoughts on books one and two, My Brilliant Friend and The Story Of A New Name). Today, I turn to book three in the series, Those Who Leave And Those Who Stay (or, in the original Italian, Storia di chi fugge e di chi resta), first published in 2014. It documents the “Middle Time” in the lives of Elena and Lila, their adulthood proper against the tumultuous backdrop of Italy in the 1960s and 70s.

Elena re-introduces the story by describing the last time she saw Lila, skipping ahead briefly to 2005, when they were out for a walk in Naples and a body was discovered in a nearby garden, that of their childhood friend Gigliola Spagnuolo. “The old neighbourhood, unlike us, had remained the same,” Elena says. Then, her mind reels back to where The Story Of A New Name left off, at the reading of Elena’s debut novel.

Those Who Leave And Those Who Stay tells two very different stories – Elena’s and Lila’s – almost entirely separate from one another. Lila already has a child, she has left her husband and is living in sin with the kind-hearted computer student Enzo. She works in a salami factory where the conditions and pay are (needless to say) very shitty. That makes her a poster-child for the communists, who take up Lila’s supposed “cause” and cause a whole lot of trouble for her along the way. Her “brilliant” mind saves her though; her encouragement and enthusiasm for Enzo’s computer studies leads her to learn alongside him, eventually joining him as an assistant at IBM. Towards the end of this installment, she takes on a highly-paid well-respected technician role of her own, working for the Solaras family (Michele Solaras is in love with Lila, and determined to keep her in his orbit).

Meanwhile, Elena enters into married life, happily at first, but after a while not so much. She has two children of her own, and attempts to write a second book. She seems to feel an overwhelming frustration with her life, but lacks Lila’s willingness to take any action to change it. She doesn’t even know what the “right” action would be. Both women have found themselves in cages, beating against the walls of patriarchy and politics, forced into misery and submission. Those Who Leave And Those Who Stay depicts how they each find their own escape route. For Lila, that comes through employment and empowerment, and for Elena, it’s a plane ticket for a trip with a man who is not her husband. Yes, that’s right, she and Nino finally get it on. Woo!

There’s a lot more politics in Those Who Leave And Those Who Stay, compared to the earlier Neapolitan novels. I think that’s attributable to both the time period over which it’s set (with the sexual revolution and communist uprisings and whatnot) and Elena’s growing political awareness with age. As always, Ferrante has managed to distill the social unrest into the lives of her characters, without ever making Those Who Leave And Those Who Stay feel like an “issue” novel. Lila and Elena have to contend with pay disputes, domestic violence, state violence, contraception, and more, each in their own way. Ferrante’s subtlety is the master-stroke, with class distinctions cloaked in social niceties and language.

I must mention that in Those Who Leave And Those Who Stay, I found the very first (albeit small) faults in Ann Goldstein’s translation. Goldstein has translated all of Ferrante’s work, and done a spectacular job of it, but in this one she was ending sentences with prepositions (drives me nuts!) and I found the occasional bum note which disrupted the “flow” of the story. The translation is still lyrical and beautiful and compulsively readable, don’t get me wrong – just perhaps not as superb and faultless as the others have been.

Ultimately, it was a pleasure, once again, to immerse myself in Lila and Elena’s “furious friendship”. The story naturally progresses beyond the bounds of their Naples neighbourhood and the youthful concerns of the previous novels, a very logical continuation akin to a well-written biography. Except Ferrante’s subject isn’t an individual, it’s a friendship and a country and a century. Those Who Leave And Those Who Stay is perhaps not my favourite of the Neapolitan novels, but honestly, Ferrante could write a novella about the one time Elena stepped in dog shit, and I would devour it with glee.

My favourite Amazon reviews of Those Who Leave And Those Who Stay:

She Is Haunted – Paige Clark