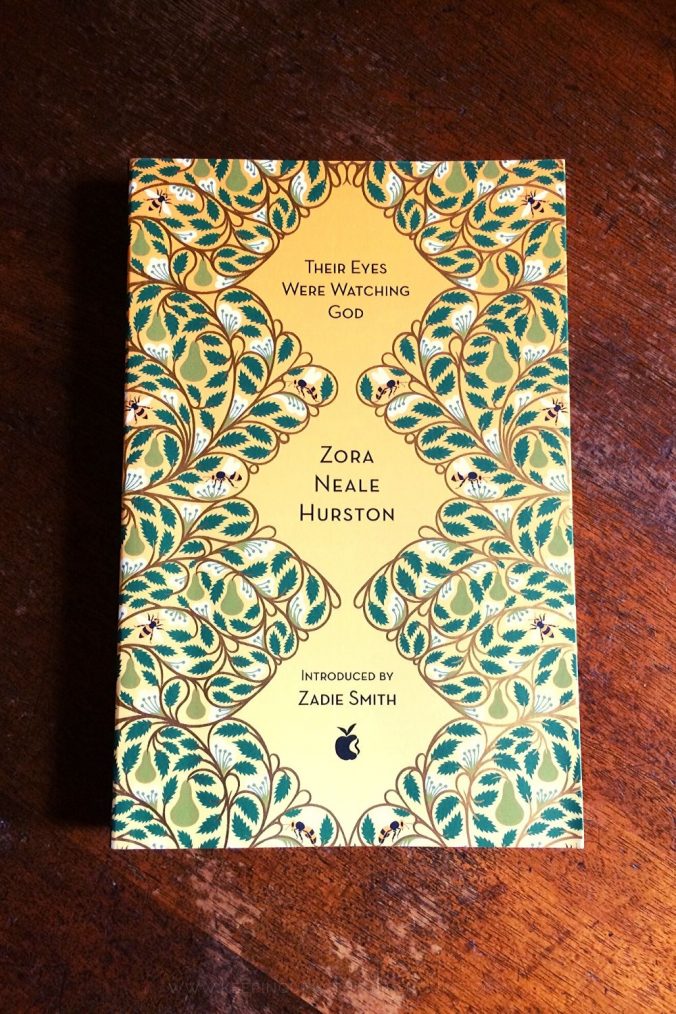 Zora Neale Hurston’s 1937 novel Their Eyes Were Watching God is a classic of the Harlem Renaissance, reproduced in this gorgeous Virago edition with an introduction by 21st century literary darling Zadie Smith. “No one should deny themselves the pleasure of Zora,” she says (page xvii), “of whatever colour, or background or gender. She’s too delightful not to be shared.” So, share I will!

Their Eyes Were Watching God was written in just seven weeks(!), though you wouldn’t know it from the clever, insightful prose and rich story. I finally know where we get the aphorism “Ships at a distance have every man’s wish on board” – it’s the opening line!

The main character, Janie Crawford, is a black woman in her mid-40s, recounting her life story to her friend Pheoby as they sit together on a back porch. She begins with her sexual awakening as a teenager (represented by a blossoming pear tree “kissed” by the bees in spring), an event not welcomed by her overprotective caregiver Nanny.

Nanny arranges to marry Janie off ASAP, to the safest bet she can find on short notice – Logan Killicks, an older farmer in desperate need of a wife. It’s a stumble start as Janie doesn’t love him, and it turns out he doesn’t love her either; he just wants someone to help out around the farm.

Disillusioned and lonely, Janie makes the controversial choice to run off with another man: Jody (Joe) Starks, a man with big dreams and charisma to match. They settle in Eatonville, an all-black community, where Jody quickly establishes himself as mayor and main store owner.

Sadly, this second marriage doesn’t work out much better than the first. Janie spends twenty years cornered into the role of Trophy Wife, and part-time store clerk to boot. Jody is controlling and critical, with apparently no awareness that his wife is a sentient being with thoughts and desires of her own. Janie finally comes into some luck when Jody dies young, and wealthy.

Newly independent, with the funds of Jody’s estate, Janie has her pick of suitors – and she picks the unlikeliest candidate of all, a drifter and gambler who goes by the name of Tea Cake.

Finally Janie finds love, real love, with a man who – knock me down with a feather – actually respects her and shows her kindness. They have all kinds of adventures together, moving to the Everglades and picking beans and throwing wild parties with dice and drinking.

Naturally, Janie’s trials can’t end there. Tea Cake is bitten by a rabid dog while fleeing the 1928 Okeechobee hurricane, and Janie is forced to shoot him when the disease takes hold. She’s put on trial for murder (which had me holding my breath), but thankfully the all-white jury acquits her quickly, and she throws a lavish funeral for her beloved. She returns to Eatonville, paying little mind to the town gossip that erupts upon her arrival, caring only that she finally found happiness.

Quite a story, isn’t it? And yet, as with so many books that are now considered classics, Their Eyes Were Watching God wasn’t well received upon initial release. Several leading Harlem Renaissance writers took issue with Hurston’s work, not to mention her political views. The development of Black Studies programs across the U.S. in the ’70s saw her gain some academic attention, but she still had little mainstream traction.

Hurston was rescued from obscurity by Alice Walker, who wrote the Looking For Zora essay (published in Ms. magazine in 1975). She said the Black community’s rejection of Hurston was like “throwing away a genius”. Then, in 2005, she was thrown another life raft by none other than the Queen of Daytime Television, Oprah Winfrey. Oprah was the executive producer of the 2005 film adaptation of Their Eyes Were Watching God, which cemented Hurston’s place in the canon. Toni Morrison called her “one of the greatest writers of our time”.

As I read it, Their Eyes Were Watching God is a story about a woman’s search for respect, disguised as a woman’s search for love. I must say, I think James Cameron has a lot to answer for, because the plot of Titanic is basically a rip-off. Janie finds love and freedom with a poor man, in stark contrast to what is “expected” of her (not to mention available to her). Her previous husbands offered her stability, which is comfort of a kind, but expected that she be defined by her marriage to them – Tea Cake wanted her to have and be anything she wanted, and supported her regardless of his own role in her life.

What I found particularly interesting about Their Eyes Were Watching God was the (relative) absence of Racism(TM), contrary to my expectations. Of course, a low racist hum still pervades the background (Nanny was a freed slave, Janie’s courtroom was segregated, and so on), but the differences and prejudices within the black community were the focus. For a novel written so early, it seems particularly revolutionary.

The dialect took a little getting used to (though that could just be my unattuned Australian eyes and ears), and I must offer a trigger warning for a violent dog death towards the end. But aside from that, I thoroughly enjoyed Their Eyes Were Watching God.

My favourite Amazon reviews of Their Eyes Were Watching God:

American, Books Made Into Movies