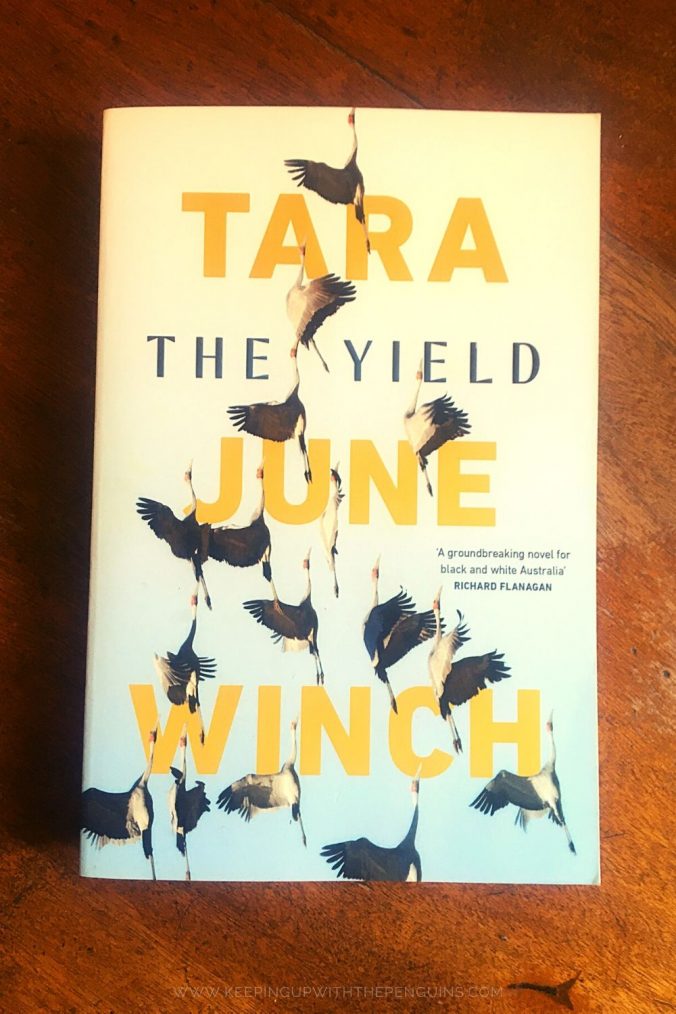 When I first read the blurb for The Yield, I was hit with a strange sense of deja vu. The premise is almost identical to that of Too Much Lip: a young woman, ripped from her roots long ago, has to return to her ancestral home after the death of her grandfather, and finds the threat of colonial interests looming on the horizon. But hold your horses, copyright lawyers! Before you go calling Melissa Lucashenko to tell her her book’s been ripped off, you should know that, while the story is similar, the tone, structure, and… well, “vibe” of The Yield could not be more different.

Winch is a Wiradjuri author, born in Australia and now based in France, with many feathers in her young cap (including a prestigious mentorship with Nobel Prize winner Wole Soyinka). Still, The Yield is the work for which she is best known, the book that won her the 2020 Miles Franklin Literary Award (and the 2020 Voss Literary Prize, and the 2020 Prime Minister’s Literary Award for fiction, and…).

The Yield is “the story of a people and a culture dispossessed… a celebration of what was and what endures… a powerful reclaiming of Indigenous language, storytelling, and identity”. It’s told from three different perspectives.

The first is a dictionary, penned by Albert ‘Poppy’ Gondiwindi, a man who uses the last moments of his life to pass on the language of his people and the storytelling tradition they have nurtured over tens of thousands of years. The second is a narrative about August, his granddaughter, who returns to present-day Australia to attend Poppy’s farewell and reconnects with her family and her heritage. The third is a letter from a Reverend Greenleaf, uncovered from the archive, in which he details the establishment of a mission in the (fictional) town of Massacre.

The “action” really only takes place in August’s story, where she discovers that a mining company plans to repossess her family home and build a tin mine that will destroy the area-slash-create a lot of jobs (blegh). She is reluctant, at first, to allow herself to emotionally and spiritually return “home” and to the family she felt she’d left behind long ago. But, as you’d expect, she finds herself drawn back through the search for a book she heard her Poppy had been writing, a dictionary of Wiradjuri language, that could prove continuing cultural connection with country (which the town needs to refute the miners’ claim to the land).

That’s a fine story, but honestly, I would have loved a version of The Yield that was purely Poppy’s dictionary. Even though it lacks the standard narrative arc of August’s section, it tells the story of Poppy’s life through his translations and it would have been a unique and incredibly compelling book all on its own. Even simply alternating that dictionary, the First Nations voice, with the letter from the Reverend (which outlines just a few of the many atrocities perpetuated against First Nations people) would have made for an excellent story.

For me, August’s story was a bit of a let down. The “innovative conceit” (as the Stella Prize judges called it) of using Wiradjuri language in The Yield to communicate a story and connect with the reader was muffled somewhat by a… well, a bog-standard David and Goliath fight that felt familiar and flat. It’s a good story in the sense that it hits all the beats you’d expect, but next to the dictionary and the letter, it didn’t shine.

That said, The Yield is still a valuable contribution to the burgeoning field of high-quality First Nations literary fiction. I’ll leave the last words to Winch herself, taken from her Author’s Note:

This novel contains the language of the Wiradjuri people. Before colonisation there were two hundred and fifty distinct languages in Australia that subdivided into six hundred dialects. The Wiradjuri language is a Pama-Nyungan language of the Wiradhuric subgroup and has been reclaimed and preserved through the efforts of Dr Uncle Stan Grant Snr AM and linguist Dr John Rudder… Cultural knowledge, community history, customs, modes of thinking and belonging to the land are carried through languages. In the last two hundred years, Australia has suffered the largest and most rapid loss of languages known to history. Today, despite efforts of revitalisation, Australia’s languages are some of the most endangered in the world.