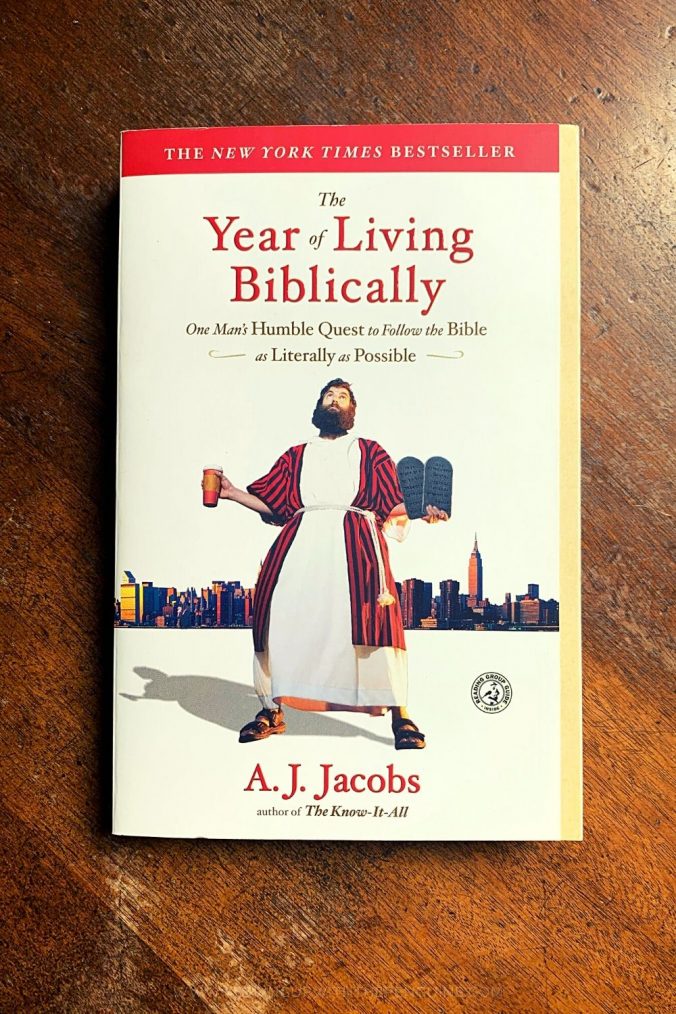 The Year Of Living Biblically (subtitle: “one man’s humble quest to follow the Bible as literally as possible”) was a particularly timely read for me, in the wake of threats to Roe v Wade making world headlines and the ousting of an evangelical Prime Minister here at home. This memoir of an “immersion journalism” experiment chronicles AJ Jacobs’s attempt to live literally by each and every rule in the Bible for one full year. If we’re going to use parts of the Bible to justify real-life laws and policies, it makes sense we should look at everything else it says, too.

Jacobs was “raised in a secular family but increasingly interested in the relevance of faith in our modern world” – basically, he wanted to see whether there was anything he was missing out on by not living by the Bible’s commandments. He jokes that this project is an “extreme religious makeover”. I’m a born-and-raised atheist myself (not even in the technically-Jewish way that Jacobs is, but the only-went-in-to-a-church-that-one-time-for-a-wedding way). So, The Year Of Living Biblically was a crash-course in the contents of the Bible for me. It turns out there’s HEAPS in there that we never hear about.

Depending on which poll you look at, somewhere between 30 and 55% of Americans say that they take the Bible literally. In reality, the vast majority of them pick and choose which bits to apply (which is why you don’t see many religious folks arrested for stoning adulterers). Jacobs vowed against this kind of “cafeteria Christianity”, and to follow every rule he could find as best he could.

Before his year of Biblical living begins, he prepares by reading the Bible cover-to-cover for the very first time. Between the testaments Old and New, he finds over seven hundred rules and guidelines that he commits to follow.

Jacobs is genuine in his approach to The Year Of Living Biblically, which I really appreciated. In the hands of a determined cynic, it would have been a very different book. He actively sets aside his cynicism in favour of curiosity and commitment to the project. He’s not here to make fun of the Bible or those who adhere to his teachings, nor does he accept everything in it blindly. He takes a rigorous approach, in frequent consultation with spiritual advisors of all kinds.

He describes his experience over the course of the whole year, not quite day-by-day but almost—a close chronological account. His beard, which he mentions frequently throughout, is “the most noticeable physical manifestation” of his transformation. It grew so big and bushy that his wife wouldn’t kiss him throughout the final two months of his project. It also led others to make assumptions about him (e.g., the nurse who assumed he was an Orthodox Jew), which was interesting in and of itself.

Now, you’re probably wondering what about the, y’know, more whacky rules. The ones that break the law, or seem downright weird in a modern context. Did Jacobs really stone adulterers? Yes (in a sense). Did he offer animal sacrifices? Yes (again, probably not exactly in the way you’d imagine, but still). Did he stop wearing clothes of mixed fibers? He hired a bloke to show him how to do it right! There’s no bait-and-switch in The Year Of Living Biblically, he does exactly what it says on the tin.

And I must say: pour some out for Julie, Jacobs’s long-suffering wife, who lived with him (and bore him two sons, twin boys, conceived by IVF) throughout his year of Biblical living. She seems to have been fairly accepting in Jacobs’s account, even when he (conveniently) couldn’t take out the rubbish on the Sabbath, though she did (understandably) take issue with the “purity” rules, that required Jacobs not touch her for at least seven days after she menstruated.

By the end of The Year Of Living Biblically, Jacobs declares himself a “reverent agnostic”. Living by the Bible’s rules for twelve months didn’t make him believe in God, but it did radically change his perspective on spirituality and broke down the stereotypes he held about those who live devout lives. (And, I must say, in sharing his experiences in this book, he’s up-ended a lot of my own assumptions and misconceptions, too.)

Jacobs referenced (quite a few times) another book he’d written about another project he’d undertaken, The Know-It-All (in which he readss an entire encyclopaedia, all 32 volumes of Encyclopaedia Britannica). I’ll be keeping an eye out for it, because it sounds like it would be just as interesting as this one. The Year Of Living Biblically would be a particularly good companion read alongside Religion For Atheists, too, as they have much the same message in the end (that there is room for sacred in the secular).

My favourite Amazon reviews of The Year Of Living Biblically:

Out Of Breath – Anna Snoekstra