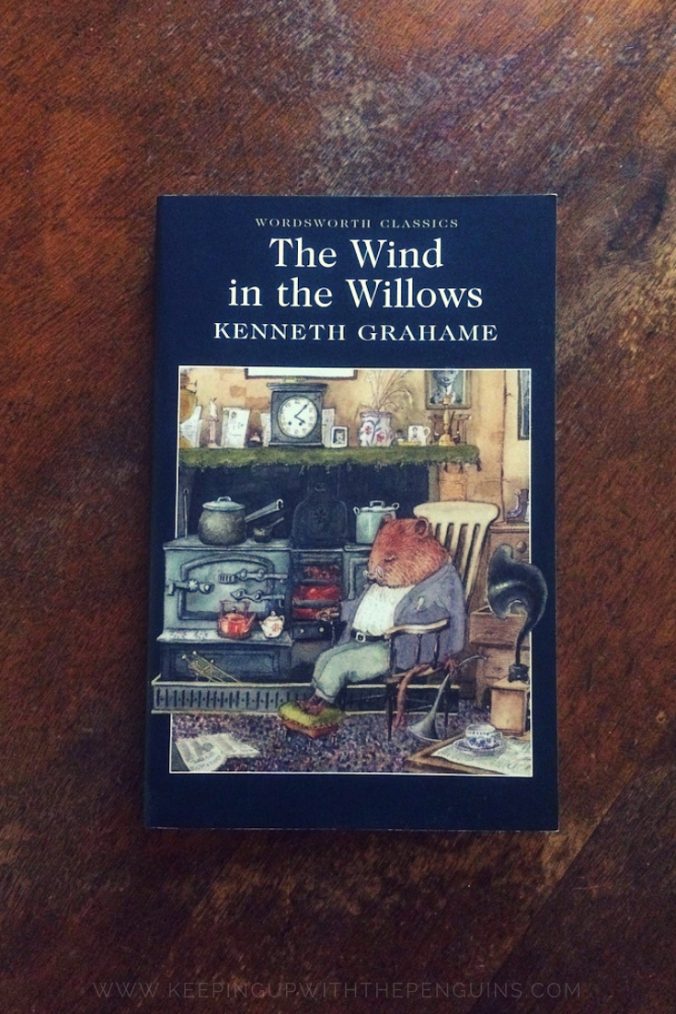 Keeper-Upperers, I made a whoopsy! Back when I reviewed Alice’s Adventures In Wonderland, I mistakenly labelled it as the only children’s book on my reading list – I forgot entirely about this bad boy! The Wind In The Willows is a children’s story written by Kenneth Grahame, first published in 1908. Set in a rural part of Edwardian England, it follows the adventures (or misadventures, as it were) of four anthropomorphised animals: Mole, Rat, Badger, and Toad. Having not been totally Disney-fied, it hasn’t quite reached the pervasive popularity of Alice, but I’d say it’s about on par in terms of loveliness.

Now, oddly for such a delightful little tome, The Wind In The Willows was actually born of some pretty miserable circumstances. Kenneth Grahame had a pretty rough trot, on the whole. His mother died when he was five, and his father had a pretty hectic drinking problem, so the kids were dumped with their grandmother. It was all rather shitful, but Grahame made the most of it. His Grandma lived near the Thames and he loved exploring the area, mucking around, as kids do. He survived his rough start, and went on to score a pretty swanky secretary job at the Bank Of England. He married at the age of 40, and the following year his wife had their only child, a sickly boy named Alastair (nicknamed Mouse), born premature and blind in one eye.

Raising Alastair was tough, and a few years after his birth Grahame decided he was jack of the rat race. He resigned from his position at the bank and moved the whole family back to the country, where he felt most at home. He spent a lot of his time “simply messing about in boats”, and began expanding the bedtime stories he had made up for Alastair into a manuscript. The characters of Toad, Mole, Ratty, and Badger had been fixtures in the Grahame household during Alastair’s childhood; even when Papa Kenneth went off on one of his boating trips, he would write letters home containing tales of their adventures for his son. So, The Wind In The Willows must’ve been a walk-up start, right? Kid tested, and approved?

Well, not really: a number of publishers rejected the manuscript outright. Everyone was expecting books more in the vein of his previous works (he’d already published The Golden Age, and Dream Days, by this point), and they were sorely disappointed. When he finally found a publisher willing to take a chance on his children’s story, the critics panned it… but the public loved it! Bookstores kept selling out, so multiple print-runs were required, in quick succession. Plus, it got a ringing endorsement from President Teddy Roosevelt, who wrote to Grahame to say he had “read it and reread it, and [had] come to accept the characters as old friends”. That’s one heck of a blurb, eh?


I’m with Teddy: it’s a brilliant book. And it’s certainly not “just” a children’s story. There’s plenty in there for adults, like this gem:

“The best part of a holiday is perhaps not so much to be resting yourself, as to see all the other fellows busy working.”

Page 13, The Wind In The Willows

The story starts with Mole, who decides he can’t be fucked cleaning his messy house, so he abandons it altogether and goes to crash on a mate’s couch (BIG MOOD!). He and his mate, Rat, have a wonderful time boating every day and living together (a more contemporary interpretation of this story offers a queer reading of their relationship, but that’s perhaps a discussion for another day). They decide to visit their mate, Toad.

Now, Toad’s a real larrikin; he has a tendency to jump on every fad, and the latest is his growing obsession with motorcars. He’s kind of a garbage person, with his criminal tendencies and blatant fat-phobia and all, but he’s also debonair and charming in his over-the-top way, and anyone who says he isn’t their favourite character is lying.

Mole decides he would also like to meet the elusive Badger, but gets really lost trying to find his house. Rat rescues him from freezing to death in the woods, and on their way home they end up stumbling upon Badger’s abode anyway. He offers them shelter from the snowstorm outside, and winds up joining their growing posse.


Meanwhile, Toad’s obsession with motorcars quickly spirals out of control. While Badger, Ratty, and Mole are sitting around drinking tea like grown-ups, Toad steals and crashes several cars, winds up hospitalised on more than one occasion, and has to pay out big money in fines. The crew holds an intervention for him, but he escapes and steals a convertible for one last joyride (that, of course, lands him in jail). He eventually escapes, and has all kinds of mishaps and misadventures making his way home. When he rejoins his mates, he convinces them to gang up and banish the weasles and stoats that have been squatting in his home during his absence. Toad learns a few important lessons about humility and friendship, and they all live happily ever after.

I thought The Wind In The Willows was going to be a light, easy read, and it was… but not as light or as easy as I was expecting. It seemed to require a lot more focus than Alice, but (granted) I did have a nasty head cold at the time I was reading it and my brain felt like Swiss cheese, so it might not have been entirely Grahame’s fault. I didn’t have it as bad as some folks: a historian was found tortured and murdered in his home in 2016, because a thief had broken in, intent on finding the rare first edition hidden somewhere in the house. (Seriously, this actually happened!)

The Wind In The Willows would be a great one to read out loud to kids, but that’s not all it’s good for. It’s also a great pick for adults who need a little bit of a break from lofty literature (like I did after last week). And I’m glad Grahame managed to turn his shitty life circumstances into a wonderful and enduring story that has become such a major source of joy in so many childhoods – good on him!

My favourite Amazon reviews of The Wind In The Willows:

What Makes A Book A Classic?