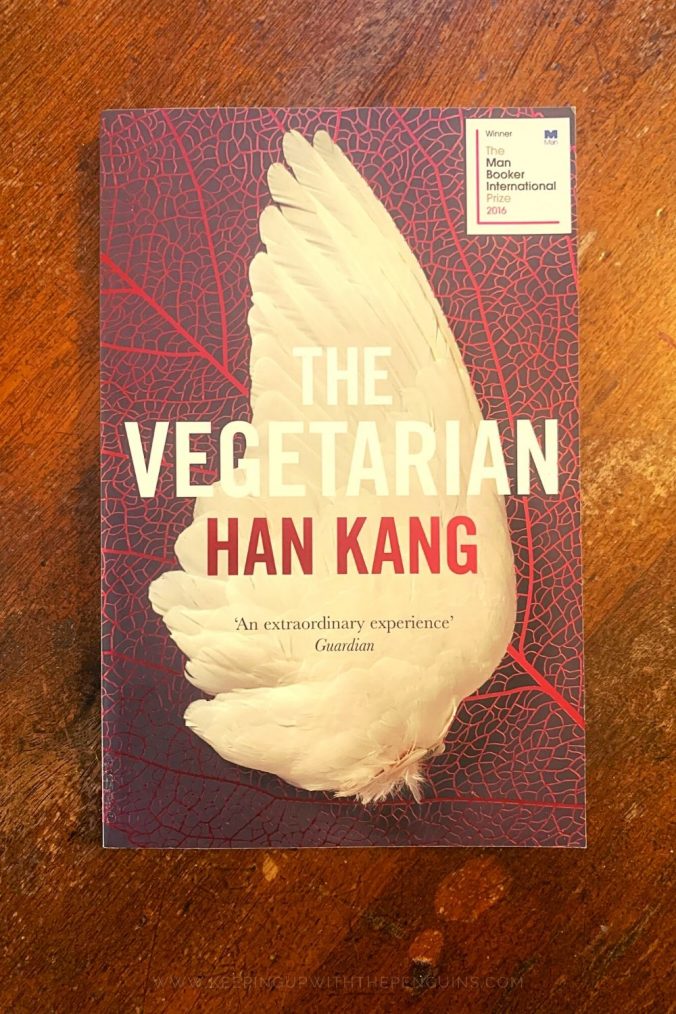 Once in a while, when you’re lucky, the book you pick up will have an opening line that will catch your eye and drag it down the page. Take this one, from The Vegetarian: “Before my wife turned vegetarian, I’d always thought of her as completely unremarkable in every way.” Isn’t that just… *chef’s kiss*? It promises a fascinating story to come. The Vegetarian is “a beautiful, unsettling novel in three acts about rebellion and taboo, violence and eroticism, and the twisting metamorphosis of a soul”, and it’s off to a strong start.

As the opening line suggests, The Vegetarian is a story about Yeong-hye, an ordinary woman with an ordinary husband, who up-ends her life and the lives of those around her by deciding to commit to vegetarianism. In Part One, narrated by her office worker husband, she wakes from repeated visceral dreams of slaughter and blood. He finds her standing in front of the fridge in the middle of the night, calmly removing all animal products and summarily binning them.

To her husband (who gave me a Humbert Humbert vibe, though not in a way I can articulate clearly – is it his self-interest? his unshakeable expectation that the whole world should naturally submit to his inclinations?), this is a shocking act of subversion, only worsened by Yeong-hye’s steadfast commitment to the whole thing. She attends one of his business dinners, with colleagues he’s desperate to impress, and offends them all by refusing to swallow their meat, and their attempts at small talk into the bargain. His reaction runs the gamut from frustration to horror to rage. When even Yeong-hye’s family cannot convince her to take a bite of pork, he declares her unwillingness to submit to his will untenable, and divorces her.

“Now don’t go making me out to be some kind of villain. Anyone can see that I’m the real victim here.”

Throughout this initial section, the husband’s narration is occasionally interrupted, in shocking contrast, by italicised passages from the perspective of Yeong-hye (the only opportunity in The Vegetarian that she has to speak for herself). These interjections are visceral, stomach-churning, and I must offer a big-time trigger warning for cruelty towards animals (specifically a dog). That was almost enough to put me off The Vegetarian altogether, but I persisted for the purposes of this review.

Part Two of The Vegetarian is set two years after Yeong-hye’s conversion. It’s told in third-person, and focuses this time on Yeong-hye’s brother-in-law, a flailing (slash failing) artist with his own bizarre obsessions. He is haunted by images that he struggles to distill into art, a love-making scene between two people decorated with painted flowers.

Conveniently enough, Yeong-hye has a petal-shaped birthmark. Now that she’s all crazy and vego and everything, he figures she might just be game to pose for him – which she does. He paints flowers all over her body, and that of a male model too, but unfortunately the male model is unable or unwilling to, ahem, perform as he should. So, the brother-in-law steps in to do it himself. What a guy!

When his wife, Yeong-hye’s sister, discovers evidence of their (ahem!) “art”, she calls emergency services and claims that it’s evidence of mental illness. They are both escorted away, and Yeong-hye is institutionalised for “treatment”.

In Part Three, Yeong-hye’s sister visits her at the psychiatric hospital every Wednesday. Yeong-hye is still refusing to eat meat, eventually refusing to eat altogether, and seems to have started identifying as a tree. The sister is confused, fearful, and – strangely – a little jealous. She wonders if she had no children, like Yeong-hye, whether she might be free to sever her connection to reality as well. The doctors try to force feed Yeong-hye in front of her sister, which is thoroughly distressing to all involved. The story ends with Yeong-hye and her sister in an ambulance, Yeong-hye being transferred to another hospital for end-of-life care (if you don’t eat, you don’t shit, and if you don’t shit, you die).

So, The Vegetarian is a pretty fucked-up twisted story, all told, and one that (ironically) says very little about the philosophy of vegetarianism or why one might wish to eschew meat from their diet. It actually began as a short story, which Kang says drew on her strange idea of “a woman turning into a plant”. Don’t come to this book looking for an impassioned defense of animal rights or the case for plant-based foods; instead, you’ll find an allegory about patriarchal oppression in Korean society and the ways that etiquette can kill.

The bait-and-switch of the title doesn’t seem to have affected the book’s reach, however. Since its initial publication in Korean in 2007, it has been translated into 23 different languages around the world. This version, “elegantly translated into bone-spare English” by Deborah Smith, was awarded the Man Booker International Prize in 2016 (it beat out the front-runner, Elena Ferrante’s The Story Of A Lost Child). The award catapulted The Vegetarian to the top of book wishlists, and the publishers had to work overtime to fulfill 462,000 orders. Kang said she was “overwhelmed, [she] thought the previous 20,000 copies sold was good enough”.

I’m not sure whether I actually enjoyed The Vegetarian, or whether it was simply a gruesome scene from which I couldn’t pull my eyes. It was certainly well-written, and short – I read it in a single sitting without actually trying to do so. It’s a compelling read, but also (at times) a horrifying one. The vegetarianism angle is interesting, but I’m not sure it makes any points that haven’t already been made more memorably elsewhere. All in all, the only way to know if The Vegetarian is for you is to try it – as it is with everything, suck it and see.

My favourite Amazon reviews of The Vegetarian:

Everyone In This Room Will Someday Be Dead – Emily Austin

Banned Books Around The World