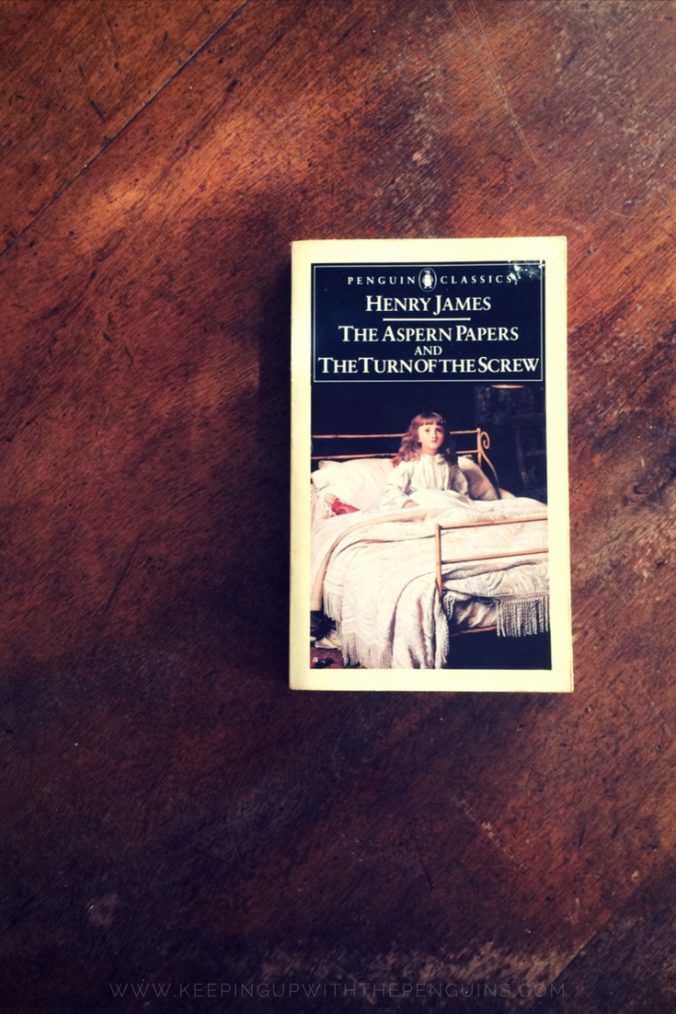 The Turn Of The Screw – Henry James

Henry James could never be accused of breviloquence. The Turn Of The Screw is what he called a “tale” – a fictional story with a single plot, too long to be a “short story” (today we call them novellas). In addition to these “tales”, he wrote plays, criticisms, autobiography, travel stories, and some twenty novels (including The Golden Bowl, also on my to-be-read list). Wordy bastard.

James got ample validation in his time: magazine publishers went gaga for tales towards the end of the 19th century. They were the perfect length to publish in serialised form – not so long that readers would lose interest, but long enough that you could guarantee that sales of the magazine would peak for at least a few weeks (cha-ching!). The Turn Of The Screw was one such story; it appeared in Collier’s Weekly magazine between January and April 1898. It was later published as a stand-alone book, and then eventually revised for what is now called the New York edition (where James made substantial changes, including the ages of central characters).

James loved ghost stories – and he wrote quite a few – but he was bored by the tropes of the genre. He preferred stories that, as he put it, “embroidered the strange and sinister onto the very type of the normal and easy”. Or, to put it in words that an actual human would use, he liked it better when the “ghosts” could easily be tricks of the mind, or something equally normal in day-to-day life, but the reader is left wondering… what if?

He certainly stuck to that formula with The Turn Of The Screw. It’s kind of a story-within-a-story – an unnamed narrator listens to a friend read a manuscript, apparently written by some long-dead former governess. The governess was hired to look after two young orphans, their surviving uncle having no interest in raising them himself. The eldest, a boy, had been expelled from boarding school, and the governess is scared to ask why. She sets about taking care of the children and educating them without seeking any additional information, while the uncle goes off cavorting and demands he be kept out of it.

The governess worries that she’s going crazy, because she starts seeing mysterious figures (a man and a woman) that no one else can see – never a good sign, eh? They come and go, in a way that seems – to the governess – very ghosty. She then learns that the previous governess and her secret lover are both dead, and deduces that they are now (obviously) haunting the children.

What is it about young children that makes any story instantly more creepy? The kids seem to know the ghosts, but they won’t give the governess a straight answer when she asks about them. The youngest (a girl) gets so upset by the governess’ incessant questioning that she demands to be taken away and never see the governess again. It seems like a bit of an overreaction to me, but kids aren’t known to be reasonable.

Then, later that night, the governess discovers the reason for the young boy’s expulsion – he was “saying things” (old-timey schools were very harsh, it would seem). As they’re having a heart-to-heart about it, the male ghost appears, and the governess tries to shield the young boy… only to look down and find that the kid has died! When she looks up, the ghost has gone. WTAF?!

It’s a simple enough story (there’s no sub-plots, nothing else going on, it’s all very straight-forward), but James’s meandering prose makes it seem a lot more complicated. Even though it’s short, it’s a really dense read, and it took me forever to get through it. At first, I thought I was struggling because I’d picked it up in the midst of a really intense wine hangover, but the more I read the more confident I became that the fault lay with James and his inability to coherently articulate a thought.

I could only get on at all… by treating my monstrous ordeal as a push in a direction usual, of course, and unpleasant, but demanding, after all, for a fair front, only another turn of the screw of ordinary human virtue.

One of James’s more readable passages, The Turn Of The Screw (Chapter 22)

As far as literary critique goes, the central question seems to be: are the ghosts real, or is the governess just bonkers? On the one hand, the story alludes to Jane Eyre and the governess can be likened to both the character of Jane and the character of Bertha (the mad wife that Rochester locked in the attic). This would seem to indicate that she is, in fact, nuts. On the other hand, nothing that James writes actually confirms this, and what fun is a ghost story if it was all a delusion in the end? In the end, all critics pretty much fall into one of three camps:

1) The governess was crazy;

2) The governess was not crazy, and ghosts are real; or

3) Trying to work it all out is stupid, it defeats the purpose and ignores the masterful way that James created ambiguity in his storytelling.

Which camp am I in? Well, to be honest, I’m not sure I really care enough about The Turn Of The Screw to pitch a tent in any of them. Perhaps I lean towards the third camp, because I think that anyone who claims to have “the answer” is full of themselves, but I also think that the idea of a “crazy” governess makes for a much more interesting story. More than anything, I think that James would be grossly pleased with himself if he knew that we were all still arguing the point, well over a century after publication. The only way to really “figure it out” is to read it for yourself and decide on your own.

My tl;dr summary of The Turn Of The Screw would be this: a governess goes bonkers and starts seeing ghosts (that may or may not be real), kind of like an old-timey Sixth Sense, but told in the wordiest-possible way.

P.S. I figured, while I was at it, I’d go ahead and read The Golden Bowl next… and my review is up now!

My favourite Amazon reviews of The Turn Of The Screw:

10 Rejected Books That Went On To Be Ridiculously Successful

The Best TED Talks on Books and Reading