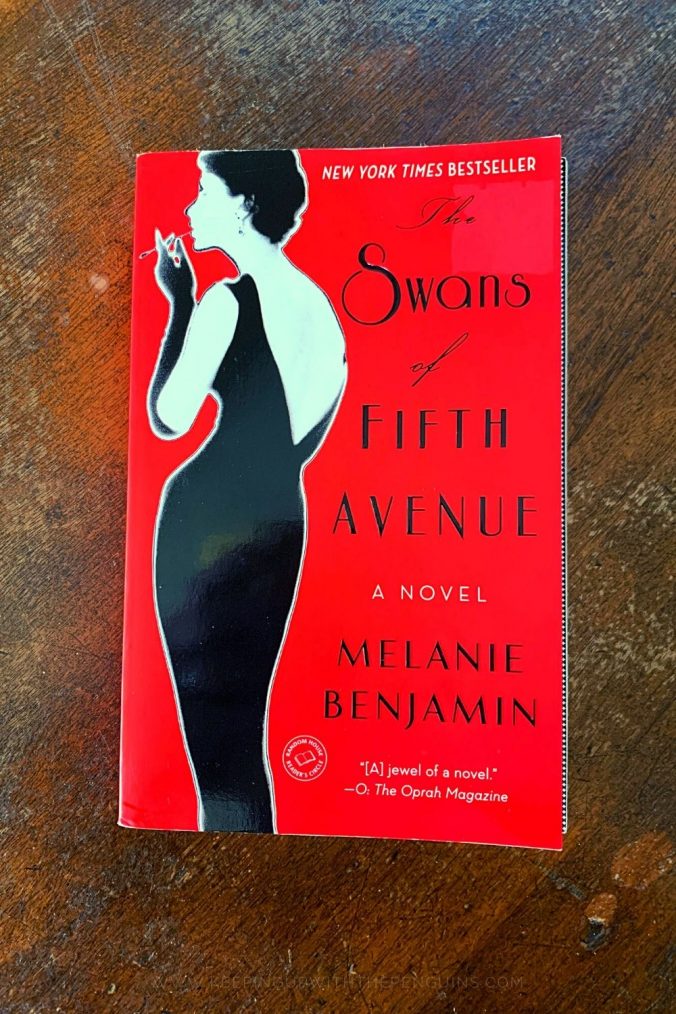 Whenever I find a book I really love, I find myself becoming curious about the author’s life off the page. That’s what drew me to The Swans Of Fifth Avenue (that, and a long-ago recommendation on a podcast, though I can’t remember which one – darn it, I really need to start writing these down!). In this historical fiction novel, Melanie Benjamin tells the story of how Truman Capote infiltrated, and then betrayed, the socialites of Manhattan’s upper-est echelons. After the riotous success of In Cold Blood, he found himself in need of a story, so he befriended the Ladies Who Lunch and then used their lives as fodder. Yes, that really happened, and Benjamin wrote a novel about it!

The Swans Of Fifth Avenue is exactly what you’d hope of a novel about 1950s New York high society: heavy on the sparkle and scandal, the gossip and glitz. This is back when literature was still glamorous and everyone knew everyone (worth knowing). Hemingway, Fitzgerald, and Wharton all get name-checked in the very first chapter.

Babe Paley is the Queen Bee of the socialite “Swans”. She’s a press darling, wealthy beyond measure, and transcendent with beauty. By any account, she “has it all”… so, of course, she’s secretly miserable. Her friends are phony, her husband a philanderer, and her material world is lacking any true love or respect.

Along comes Truman Capote, an impish gay (i.e., non-threatening) writer on the come up. He catches a ride on Babe’s private jet (well, her husband’s, and he – in fairness – was expecting “Truman” the former president, not “Truman” the cheeky ink slinger). Capote and Babe recognise each other as kindred spirits and become instant friends.

Babe brings Capote into her glittering world almost as soon as they land. She introduces him to all of the Swans, and before long they’re trading gossip and going on shopping sprees and getting snapped by the paps on the street. Babe entrusts Capote with her deepest, darkest secrets about her sexless marriage and search for meaning. (Spoiler alert: BIG mistake! Big! HUGE!)

Capote is quickly revealed to be a mischievous (at best) or malevolent (at worst) liar. He tells different versions of the same story: to Babe, he says his childhood was dreadful, but to Slim (her best friend, the brassiest Swan) he says that it was wonderful. He smiles and nods at acquaintances in restaurants, only to savage them to all who’ll listen as soon as they leave the room. He comes across as a pernicious little twit, but undeniably great fun to have over for dinner. One thing I did note as I was reading The Swans Of Fifth Avenue is that Capote is portrayed as a lot more boyish and vulnerable than he has been in other fictionalised versions of his life – I’m thinking mainly of Philip Seymour Hoffman’s portrayal in the film Capote. Only towards the end of the book did he morph into the bloated, desperate alcoholic that’s more familiar to me.

The publication of In Cold Blood is the turning point in his career, and his relationships with the Swans. Basically, Capote gets real high off his own fumes, and it’s not a graceful comedown. After the success of his true crime novel, and the big party he throws to celebrate his own triumph, he struggles to write anything that he feels comes close to the expectations (that he has stoked) of his adoring public and publishers. Lacking any other muses, he writes La Cote Basque, 1965: a very, very thinly veiled short story about one Lady Ina Coolbirth and her high-society friends at brunch. “The characters” trade stories and gossip about, oh, I don’t know, sexless philandering husbands and squalid one night stands.

Capote thinks he’s been very clever and literary, of course, but his delusion is shattered upon publication. All of his friends recognise themselves immediately – one socialite actually takes her own life after reading the story – and Capote is blacklisted. All of the glitz and glamour is torn away from him, and he can’t even get his former best friends to pick up the phone when he calls. It’s a tragic fall from grace, but one that feels very deserved.

Of course, the constant distraction of reading any novelisation of a true story is always present in The Swans Of Fifth Avenue: how much of it is true? (The same could be said of Capote’s work, ahem!) Benjamin addresses this in her author’s note:

“All of [this book’s] characters were incurable liars in life. This gave me quite a lot of leeway… All conversations are imagined, although some—like the conversation between Truman Capote and Liz Smith near the end—are known to have occurred… The timeline is faithful. The fallout from Answered Prayers is true to life. The relationships are real; in other words, Truman and Babe and Bill Paley were that tight little trio; Slim was Babe’s closest female friend… The emotions are what I imagine; the motivations and intent behind some of these documented acts. The facts are the bones upon which I stretch the fictionalised flesh.”

I was really grateful to her for providing this context – though maybe putting them in a foreword would have made it easier to focus on the fun imagined elements throughout, instead of stopping to Google each new character as they were introduced.

The Swans Of Fifth Avenue is highly readable, the same way that Prosecco is highly drinkable on a sunny afternoon. I thoroughly enjoyed this delicious gossipy take on Capote’s misdeeds. Perhaps it could’ve been a little leaner, a little meaner, but it was great fun to read as it is. I’d recommend this one if you’re in the mood escape to a past when there were no Instagram or Twitter accounts letting the rich and fabulous “control their own narratives”.

My favourite Amazon reviews of The Swans Of Fifth Avenue:

She Come By It Natural – Sarah Smarsh