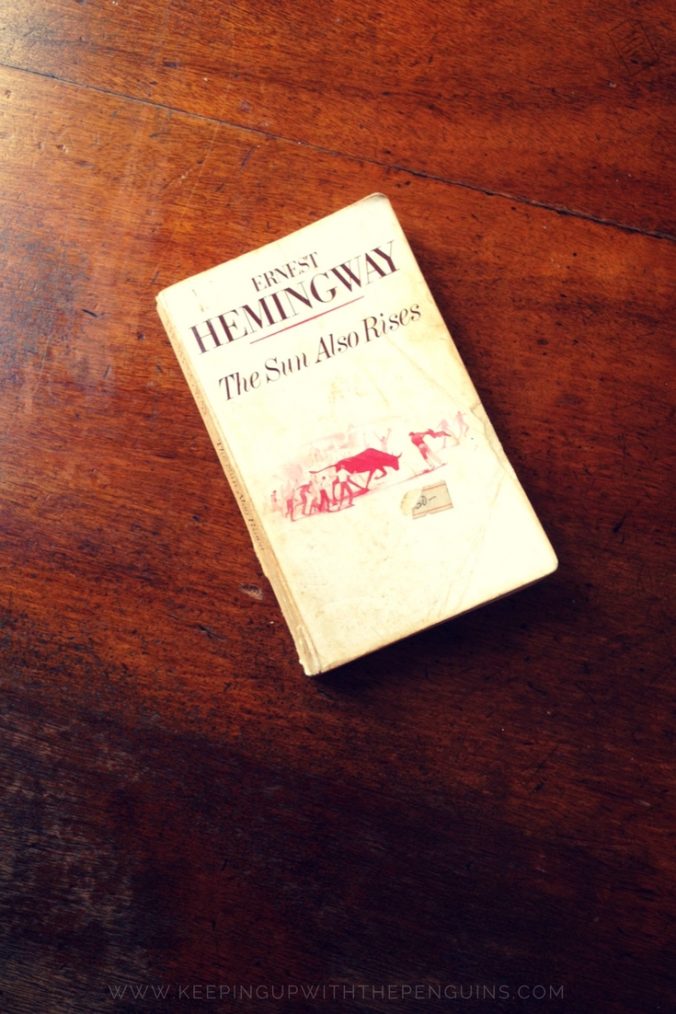 A little while back, I conned my mate Andrew into visiting a secondhand bookstore with me (my friends know that I’m prone to this kind of maneuver). While were were there, another patron overheard me (loudly) bitching about how difficult it was to find a well-preserved copy of Hemingway’s The Sun Also Rises. She tapped me on the shoulder, pulled this copy off the shelf, and handed it to me so sweetly I almost cried. Well, of course, all of this happened on the very day that I had no cash on me – so Andrew swooped in and made the purchase on my behalf. What a champion!

I was eager to read more Hemingway. I first encountered his short story Hills Like White Elephants at uni, and I’ve re-read it a thousands times since; it was very formative for me. Other than that, my only real exposure to Hemingway was Kat’s succinct analysis in 10 Things I Hate About You (of course).

The Sun Also Rises, Hemingway’s first novel, was published in 1926. He actually pulled a sneaky trick to make sure he got the publisher that he wanted for it. While under contract to Boni & Liveright (with whom he was unhappy for some reason), he submitted a hastily-written satirical novella that he knew they would reject, effectively terminating his contract on the spot. This allowed him to submit The Sun Also Rises to Scribner, and the rest is history.

The story follows a group of American and British migrants who travel to Pamplona to watch the running of the bulls and the bullfights. Of course, Hemingway was the king of “write what you know”, so the story is very closely based on his own trip to Spain in 1925. The characters were real people in Hemingway’s circle, and the action is based on real events. Apparently, he had originally intended to write a non-fiction book about bullfighting, but he decided that his experiences had given him plenty of content for a novel – and the result was The Sun Also Rises.

So, what’s it like? Well, it seems to confirm the worst of what people say about Hemingway. It’s all brooding white guys, drinking a lot and butting bruised masculine egos. The women are either shrill harpies or desirable floozies. A boy likes an unattainable girl, who shags all of his rich friends but sticks him in the friendzone. The boy goes fishing with those friends, and the girl tags along. Everybody drinks.

The dialogue is so sparse and hard to follow that I almost missed what seems to be the focal point of the novel: Jake (the protagonist) is literally impotent, thanks to a nasty war wound. Once I cottoned onto that, I couldn’t decide whether it made The Sun Also Rises better or worse. I know that his injury symbolises the disillusionment and frustration of his entire cohort, not to mention Jake’s own metaphorical impotence in navigating friendships and politics in post-war Europe, but… it’s just a little obvious, isn’t it? A little too neat? I mean, a man gets his dick blown off and starts questioning the meaning of the world without his masculinity in it: pfft.

As much as Hemingway is the darling of the American literary canon, not everybody loved The Sun Also Rises, so I know I’m not alone here. A reviewer at the Cincinnati Enquirer wrote at the time that The Sun Also Rises “begins nowhere and ends in nothing”, which I thought was particularly pithy.

Even Hemingway’s own mother wasn’t a fan: she hung shit on him for wasting his talents on such filth, writing to him “Surely you have other words in your vocabulary than ‘damn’ and ‘bitch’ – every page fills me with a sick loathing”. You can’t please everyone…

Anyway, Jake’s love interest is Brett – and wherever she goes, trouble follows. Men fall over themselves for her: they drink too much, and fight one another. I liked Brett in so much as she was unashamed about enjoying sex and chasing good times – there’s not enough of that in female characters, even today – but I certainly didn’t idolise her the way that Grown Up Literary Critics seem to. To me, she was a mere receptacle for all of the projections, hopes and frustrations of men. She lacked any true independence or self-determination. It’s all well and good to commit yourself to the ho-life, but damn girl – have a sense of who you are!

Jake’s defective junk is the primary obstacle to their having a relationship – which seems kind of quaint and ridiculous to a post-Sexual Revolution reader. If Brett and Jake had heard of cunnilingus, The Sun Also Rises would have played out differently. Of course, that would depend on Hemingway opening his mind to the sexual agency of a woman. You can be damn sure that if the situation were reversed, and Brett had had her lady parts blown off in the war, Hemingway would have been writing a life of endless blow jobs for Jake – a “happy ending” as it were (ha!).

This is yet another book from my Keeping Up With The Penguins reading list that makes it abundantly clear to me how little humanity has changed over time (see also: Dante’s The Divine Comedy). Nearly a century after its publication, I still recognise Hemingway’s descriptions of pre-gaming for the fiesta (akin to skulling Vodka Cruisers at home before jumping in the Uber to the club). All the men around Brett are just bitching about how they’ve been “friendzoned”, the way that angry young men do on the internet today. Technology might progress exponentially, and the new cycle might move ever-faster, but those same base urges come forth one way or another.

I think I’ll need to give The Sun Also Rises another read or two before I write it off completely. Another friend (who loves it) asked me what I thought after I’d finished, and (very gently) pointed out all the ways in which I was wrong. A spot of Googling reveals all kinds of readings that I overlooked. Spoilers actually save the day with this one – it’s actually better if you know the history and the themes going in.

My tl;dr summary would be this: it’s a self-indulgent story about drunk Americans and Brits trying to fuck one another and ignore their existential crises in Spain, whinging and bruised male egos galore. Proceed with caution.

My favourite Amazon reviews of The Sun Also Rises: