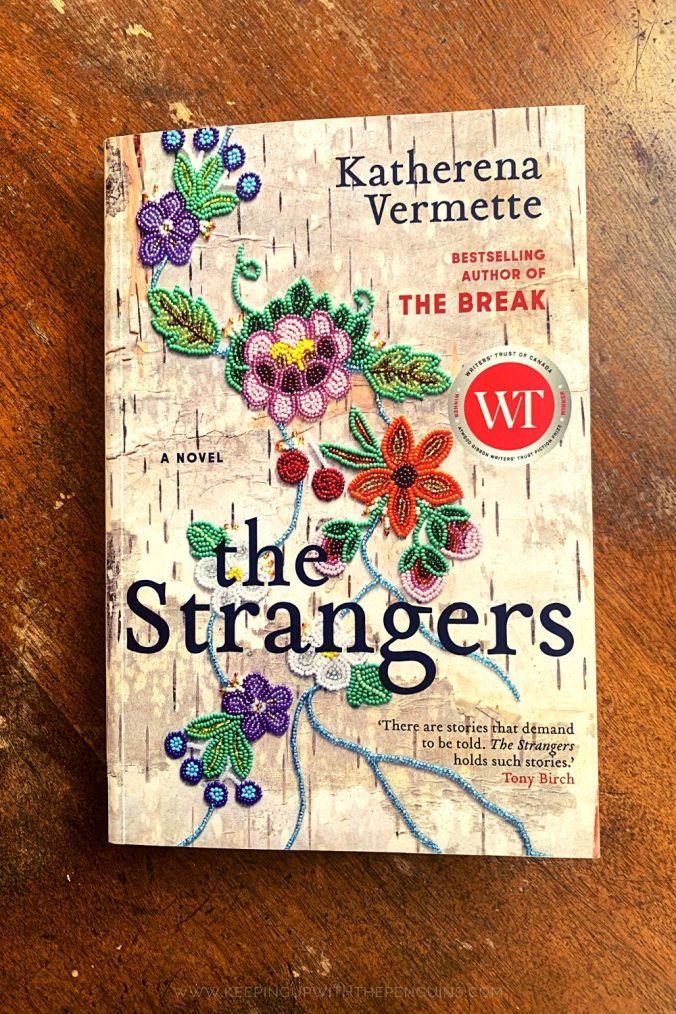 The Strangers is “a searing exploration of race, class, inherited trauma, and matrilineal bonds that – despite everything – refuse to be broken”. Katherena Vermette is a Red River Métis (Michif) writer, from the heart of Métis nation (Canada), and her heritage permeates this incredible First Nations novel. The wonderful team at UQP Books were kind enough to send me a copy for review.

The first thing that struck me about The Strangers (after the truly stunning cover art) was the perfect content warning provided before the story began. I hope they don’t mind me reproducing it in full here, because it’s truly a masterclass in how trigger warnings should be done: thoughtful, encouraging, and helpful.

This book is about coping within the systems that have been imposed upon us, so there are plenty of triggers for those whose lives have been traumatically affected by them. These include depictions of child apprehension, solitary incarceration, suicide ideation, some drug use, and some physical violence. (It’s not just about that, hey? And I do try to cram as much love and hope in between as possible.)

The Strangers is told in five parts, vignettes from five consecutive years in the lives of three generations of Stranger women. Margaret is bitter and weary; her daughter, Elise, is addicted and broken; Elise’s eldest daughter, Phoenix, is angry and incarcerated; and Cedar, Phoenix’s younger sister, is lonely and confused.

I found Elise particularly infuriating, and came to dread her chapters – but in a good way, somehow. I really wanted to empathise with her, and I swear I tried my best, but it was a tough row to hoe. The “dangerous criminal”, foul-mouthed Phoenix, was actually a lot more relatable and enjoyable to read. I suspect every reader will have their own affinities and preferences for these four very different women.

Despite the (very) heavy subject matter, and Vermette’s talent for stark realism, The Strangers is surprisingly readable. The pages fly by! It really exceeded my expectations, and I’m still mulling over it days later.

What’s The Difference Between Autobiography And Memoir?