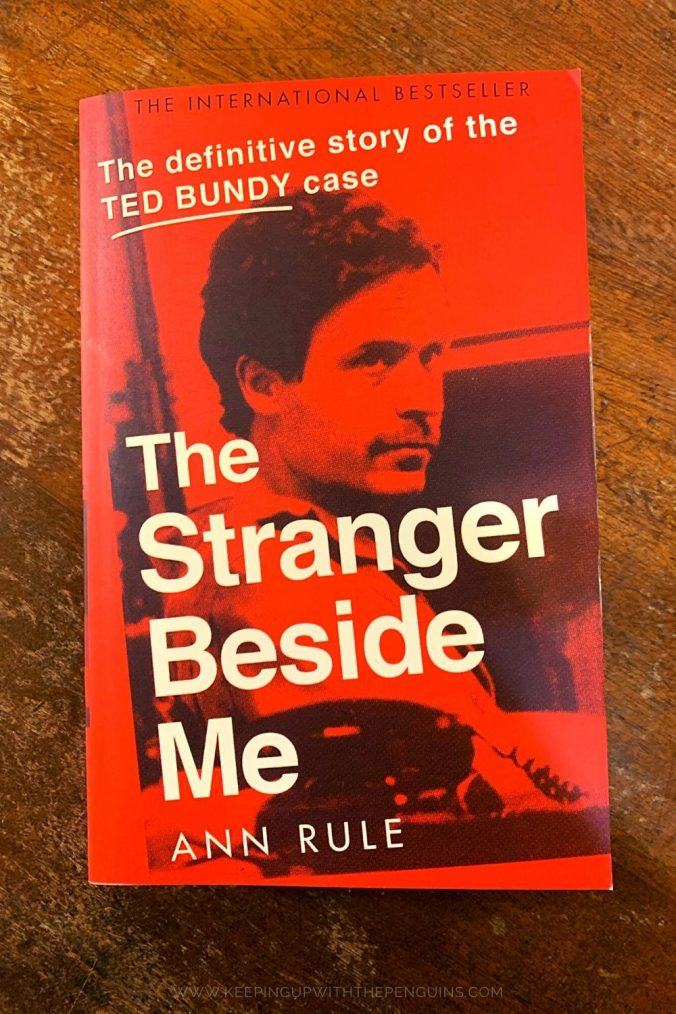 The Stranger Beside Me – Ann Rule

There are a few serial killers so notorious that their names have become synonymous with their crimes. Ask any stranger on the street to name a serial killer, and chances are Ted Bundy will be the name they give you. I normally shy away from the twisted fandom that grows around killers like Bundy; so much has been written, recorded, and filmed about him, it’s hard to escape him let alone choose one version as the “definitive” Ted Bundy story… but The Stranger Beside Me is such an enduring book of true crime, up there with In Cold Blood, that I felt I simply had to read it.

The Stranger Beside Me is unique in that it is both biographical and autobiographical, existing in the weird gray area between journalism and memoir. See, Rule wasn’t just any crime writer who picked up the Bundy story: she was his friend, before his crimes came to light. She met Bundy in 1971, when he was a psychology student at the University of Washington, and they volunteered together manning the phones of a suicide crisis line.

To write a book about an anonymous murder suspect is one thing. To write such a book about someone you have known and cared for for ten years is quite another… Ted Bundy’s story must be told, and it must be told inn its entirety if any good can evolve from the terrible years: 1974-1980.

The Stranger Beside Me (Preface)

When they first got to know each other, Bundy seemed to Rule a “kind, solicitous, and empathetic” person. The incongruity of a serial killer working to save the lives of desperate callers to a suicide hotline is really difficult to deal with, for Rule and the reader. “Ted Bundy took lives [but] he also saved lives,” she says on page 28. “I know he did, because I was there when he did it.”

Even though you “know” the Bundy story, as I do, I’m quite sure The Stranger Beside Me will still have a few unexpected twists and turns for you. For instance, about a hundred pages in (in 1974, the early days of Bundy’s killing career, in the book’s timeline), Rule shares something I did NOT see coming: she recognised the description of her friend Ted in a witness statement, and reported the similarities to police. I actually wrote in my notes as I was reading: “HOLY FUCK! SHE TIPPED OFF THE COPS! IN 1974!”. Unfortunately, Rule’s tip was one of thousands, and Bundy’s name was buried beneath the hundreds of other “more likely” suspects.

And, in addition to the jaw-drop moments, there are heart-pounding ones, too: like when Rule meets Bundy for lunch after he is released on bail for an early kidnapping charge. She tries to ask him, diplomatically, whether there was any truth to the charges and rumours. Can you imagine sitting across the table from a close colleague and trying to ask them whether they’d abducted and killed a few women? It makes my knees knock just to think about it.

No one could accuse Rule of not openly admitting her potential bias in her friendship with Bundy, and interrogating it for and with the reader in The Stranger Beside Me. Constant doubt gnaws at Rule throughout the book, and she doesn’t shy away from sharing her personal feelings about both Bundy and his crimes, even when those feelings are contradictory and confusing. Thankfully, she was never in love with Bundy (as so many of the women who surrounded him were), so there’s no mushiness or lust-induced blind-spots in her telling. She even acknowledges the dark stroke of “luck” that saw her, a mid-career crime writer, befriending a man who turned out to be one of the most notorious killers of the 20th century. It seems, to me, a very ethical way of writing true crime – one I’d like to see more writers in the genre adopt.

I felt a chill. Not even a television script could make it believable that a crime writer could sign a contract to write a book about a killer, and then have the suspect turn out to be her close friend. It wouldn’t wash.

I doubt you’d have even clicked on this review if you’re sensitive to sexualised violence against women, but the trigger warnings bear mentioning anyway. The Stranger Beside Me contains fairly graphic detail about Bundy’s crimes, but the descriptions aren’t gratuitous. Rule isn’t trying to titillate you, or make a spectacle of the violence; she only discloses as much as she needs to to impress upon you the horror that Bundy wrought, to tell the Bundy story in its entirety, as she set out to do. The lives of Bundy’s victims are described in detail, where possible, and the women are spoken of with great respect – they’re not just tally marks next to Bundy’s name.

Because Ted murdered so many, many women, he did more than rob them of their lives. He robbed them of their specialness, too. It is too easy, and expedient, to present them as a list of names; it is impossible to tell each victim’s story within the confines of one book. All those bright, pretty, beloved young women became, of necessity, ‘Bundy victims’. And only Ted stayed in the spotlight.

Rule highlights that, and many of the other ways that media coverage of serial killers and the public’s thirst to know are problematic – a particularly interesting position for a true crime writer to take. At several points throughout The Stranger Beside Me, newspaper reporting stymies the investigation, and Rule alludes to the possibility that media coverage spurs on killers with designs on infamy.

She tried to mitigate that ethical problem, however, by only publishing The Stranger Beside Me once Bundy had been tried and convicted, knowing he would never again be a free man and his reign of terror was over. The boook went on to become her first best-seller (and she had 34 more after). The thing is, the original text of The Stranger Beside Me ended before, well, The End. It wraps up when Bundy is sentenced to death a third time, for the murder of Kimberly Leach, but a death sentence is never really the end of a story like this one.

So, Rule has appended updates in subsequent editions, covering Bundy’s response to her book (first, he demanded money, then he froze her out, then he “forgave” her – what a guy), his endless appeals, the signing of his death warrant(s), the waxing and waning media attention, his surreptitious fathering of a child from Death Row, and his final confessions before his execution. Really, there’s just as much story in the afterwords as there is in the book proper.

At first, I really enjoyed The Stranger Beside Me as a chilling, spooky read… but as the end grew closer, and the true impact of Bundy’s crimes became more tangible, it was no longer spooky so much as desperately sad. It’s a mind-blowing excellent read, but it made me Feel A Lot Of Things (which is a testament, really, to its excellence, and Rule’s skill as a true crime writer). I scoured my notes looking for a criticism, and could only find this: there were quite a few odd typos and misprints, which seemed strange in a book that has circulated so widely and been re-published so many times. So, on the whole, it’s a great read, even if you’re sick to death of hearing about Ted Bundy.

My favourite Amazon reviews of The Stranger Beside Me: