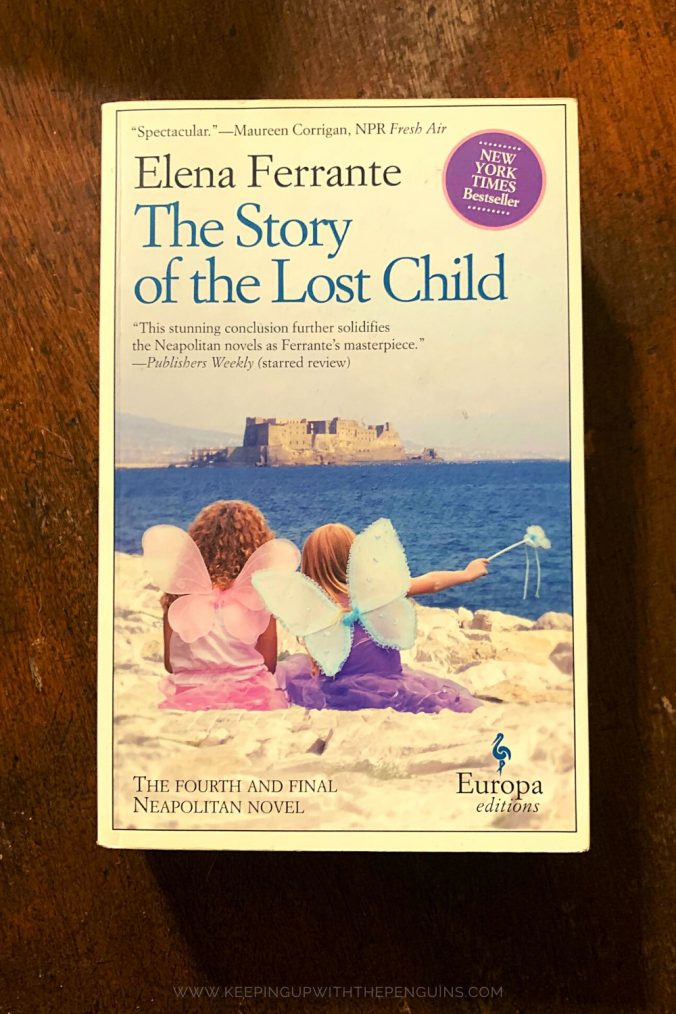 The Story Of The Lost Child – Elena Ferrante

Ah, here we are: the last of the Neapolitan novels. Sitting down to read The Story Of The Lost Child felt like sitting down to goodbye drinks with an old friend the night before they leave town. Having followed Lena and Lila through childhood (My Brilliant Friend), adolescence (The Story Of A New Name), and young adulthood (Those Who Leave And Those Who Stay), this last installment follows them as they mature into old age. It has been translated, as always, from the original Italian into English by the imitable Ann Goldstein.

Lena says early on in The Story Of The Lost Child that this is “the most painful part of the story” and (spoiler alert) she’s spot on. I think this might be the most intensely felt of all the Neapolitan novels, more deeply impactful than even the sharp angst of My Brilliant Friend.

It begins in a time of painful contrasts for narrator Lena: the passion of a long-awaited love affair with Nino and the satisfaction of a revitalised career, experienced simultaneously with complete social, marital, and familial collapse. She officially leaves her husband Pietro, and believes that Nino too has left his wife… but Lila, as always, comes around with a big bucket full of truth and dumps it over Lena’s head. Nino hasn’t left his wife, and doesn’t intend to.

Even when he knocks Lena up, he stays with his wife, and splits his time between two households. Lila gets pregnant at the same time (by Enzo, with whom she still lives and runs a computer business). Finally, Lena and Lila’s lives are on the same track. They go to gyno appointments together, commiserate over the symptoms of pregnancy, and become close once again.

They grow even closer when Lena discovers Nino is cheating on her with the housekeeper, and moves into a small apartment right above Lila’s. They have daughters the same age, they trade off dinners and childcare, it’s all very Modern, takes-a-village, etc.

The big catalyst of The Story Of The Lost Child is that Lena, in desperation and lacking time to write new work, submits a copy of her old manuscript – a novel about her childhood in Naples – for publication. Apparently, being back in the old neighbourhood makes her prose just a bit too vivid. The dangerous Solaras family recognise themselves in the pages, and the ramifications – not just for Lena, but for everyone in her orbit – are huge. (There’s a hint in the title…)

I won’t reveal the Big Twists from that point (got to hold something back, eh?), but the ending – oooft! It was better than I could have ever imagined. Standing ovation. Even after thousands of pages, Ferrante still surprised me and delighted me and made my heart twist in my chest. The end of The Story Of The Lost Child is absolutely breathtaking.

As much as I thoroughly enjoyed The Story Of The Lost Child, finishing it felt bittersweet. I know there are other Ferrante books to read (some of them are already crowded into my to-read shelf!), and I’m a bit too Mature(TM) to mope about fictional characters… but still! I’m amazed and impressed with how the story ended, but quite sad that there’s no more of it for me to discover.

Some project for some future year – “when I have time”, ha! – will be to sit down and re-read all of the Neapolitan novels from start to finish, but back-to-back this time (instead of one per year, as I’ve done since 2018). I wish I could do it immediately, if I’m being honest, but naturally there are other books to be read and things to be done that have to take priority. It’s one for the bucket list.

My favourite Amazon reviews of The Story Of The Lost Child:

39 Best Quotes From The Neapolitan Novels