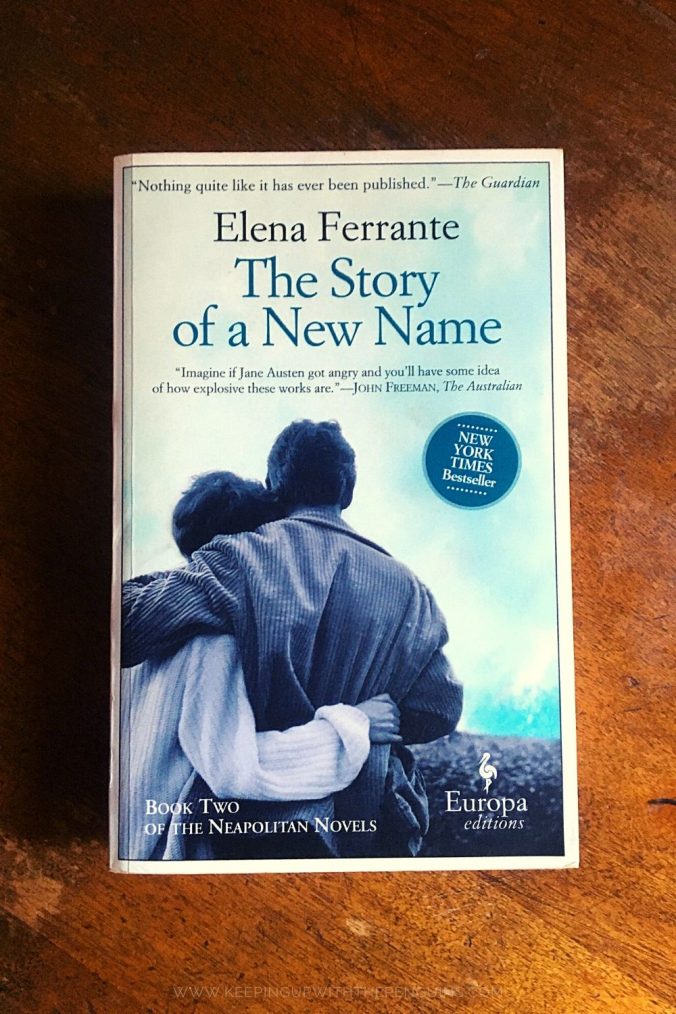 The Story Of A New Name – Elena Ferrante

You should know that, as I write this, I am suffering a severe case of Ferrante Fever. Ever since I read My Brilliant Friend, I’ve been borderline-obsessed with the world’s most notable living pseudonymous author. That book was the first in the Neapolitan Quartet, a series of four novels (a “wildly original contemporary epic”) that follows the lives of Lena and Lila, two girls who grow up in mid-20th century Naples with all of the impoverishment, violence, and oppression that such a life entails. I can’t emphasise enough the delight of discovering an author who has such a glorious back-list to read through. I find myself spacing out my reading of Ferrante, trying to make the magic last as long as possible. Today, I share with you my thoughts on the second book in the Neapolitan Quartet, The Story Of A New Name.

The Story Of A New Name was first published in the original Italian in 2013, and shortly thereafter translated into English by the imitable Ann Goldstein (always, always, always #NameTheTranslator). The story picks up after My Brilliant Friend leaves off, in the spring of 1966. Lila is a newlywed, and Lena is continuing her studies, exploring the world beyond the neighbourhood of their childhoods. Despite their diverging paths, their complex and evolving bond continues.

Lila gives Lena her Garner-esque diaries for safe-keeping, on the condition that her friend would never read them. Lena, of course, betrays that promise almost immediately (who among us wouldn’t? Come on, now!). Upon reading them, Lena is forced to re-evaluate her life, and Lila’s. Confronted by what she discovers (their childhoods being depicted with “ruthless accuracy”), she promptly throws the offending notebooks into a river.

I can’t even pretend that anything I say about The Story Of A New Name from here on won’t constitute “spoilers”, so proceed at your own peril…


Lila emerges from her honeymoon only to find herself living under a weight of expectation to become pregnant, though she doesn’t want to have children and she deeply resents her husband (he’s a dickhead, btw). Her first pregnancy is short-lived, and she miscarries at ten weeks. The town gossip suggests that her animosity kills any embryos that would embed in her womb (yep, that’s fucked). Given that her husband regularly beats and rapes her, who could blame her for being a bit ticked off? Their marriage is inherently political, intertwined with and influenced by their family business and their relationship with the Solaras brothers (basically the rich kids who have financed all their hopes and dreams… at a price).

Lila’s doctor prescribes “sun and swimming” (y’know, “for strength”) to facilitate her fertility, so she’s packed off to a summer beach holiday. Determined not to be trapped alone with her mother and her sister-in-law, she begs Lena to come with her. Lena has her own ulterior motive to accompany them: Nino, the unattainable intellectual object of her secret crush, will be “studying” at the beach, so Lena convinces Lila that’s the place to be for all this fertile “sun and swimming” business.

Most of The Story Of A New Name takes place on this beach holiday because, folks, it is full of drama – think your favourite reality show to the power of N. Remember how Lena harboured secret desires for Nino? Yeah, Lila – her best friend – hooks up with him instead. The affair is brief, but it still leaves Lila with a bun in the oven (gasp! pearl-clutching!), and she is forced to return to her husband who does not believe her (whether he’s deluding himself, or genuinely confused, who knows), when Lila says the child isn’t his.


Stefano – Lila’s husband – undertakes an affair of his own and his lover, Ada, becomes pregnant, too. Lila, quite understandably, is fed up with the bullshit and she leaves, despite the fact that she’s forced to move into a smaller, dodgier neighbourhood with her childhood fried, Enzo. Ada happily takes her place at Stefano’s side, with their kind-of-more-legitimate kid in their big house.

While all of this is going on, Lena – the actual narrator, though you’d be forgiven for forgetting that the story is “about” her because it’s really all “about” her brilliant friend – graduates from high school, and wins a scholarship to study at a university in Pisa. That’s all well and good, but she suffers from one of the most debilitating cases of imposter syndrome I’ve ever seen depicted in fiction. Lena doubts herself constantly: her intellect, her background, her aptitude…

And then there’s the fact that she’s sexually active. A young woman! Unmarried! Having sex! Can you believe it? Set aside the fact that it’s largely rooted in an earlier molestation: it’s scandalous! Eventually, she meets Pietro, a nice young bloke from an important family who doesn’t give a shit about her “reputation” (what a guy). He’s just happy to finally meet a girl he can talk to about old poetry and philosophy and politics.


When they graduate university, Pietro’s gift to Lena is an engagement ring, which she happily(?) accepts. In return, she gives him a hand-written novel. Unbeknownst to her, he passes it on to his mother, who uses her connections to have it placed at a publishing house. The book is released to popular success and critical acclaim, but Lena is disappointed and confused when she realises that no one from her old neighbourhood really gives a shit (her old teacher and former librarian, who fostered her young literary mind, are no longer around). The story ends with Lena attending her first public reading as a published author… where she realises that Nino is in attendance. Yes, that Nino, of the object-of-her-secret-desire-but-then-he-knocked-up-her-brilliant-friend fame.

Returning to the Neapolitan Quartet with The Story Of A New Name felt like picking up where I’d left off with old friends. I got to see how Lila and Lena “turned out”, what “happened next” for them. That might sound bleeding obvious to anyone who’s used to reading books in series, but mostly I read stand-alone novels, so for me it was wonderful. Lila was as manipulative and shrewd as ever, but still a sympathetic character – my feelings towards her were as ambivalent, contradictory, and ebbing as Lena’s own.

Thematically, The Story Of A New Name addresses many of the same issues as My Brilliant Friend: female friendship, class marginalisation, sexual expression, competitive relationships, the importance of literacy… The decisions of the girls’ parents in the first novel (Lena’s to allow her to continue her education, Lila’s to withdraw her from school at a young age) have ripple effects throughout their lives. The Neapolitan Quartet is effectively a Sliding Doors-epic. Both feel overshadowed and envious of the other, furious jealousy mingles with the unshakeable affection of shared experience… ugh. Ferrante is just too good for words. Too good.


My favourite Amazon reviews of The Story Of A New Name: