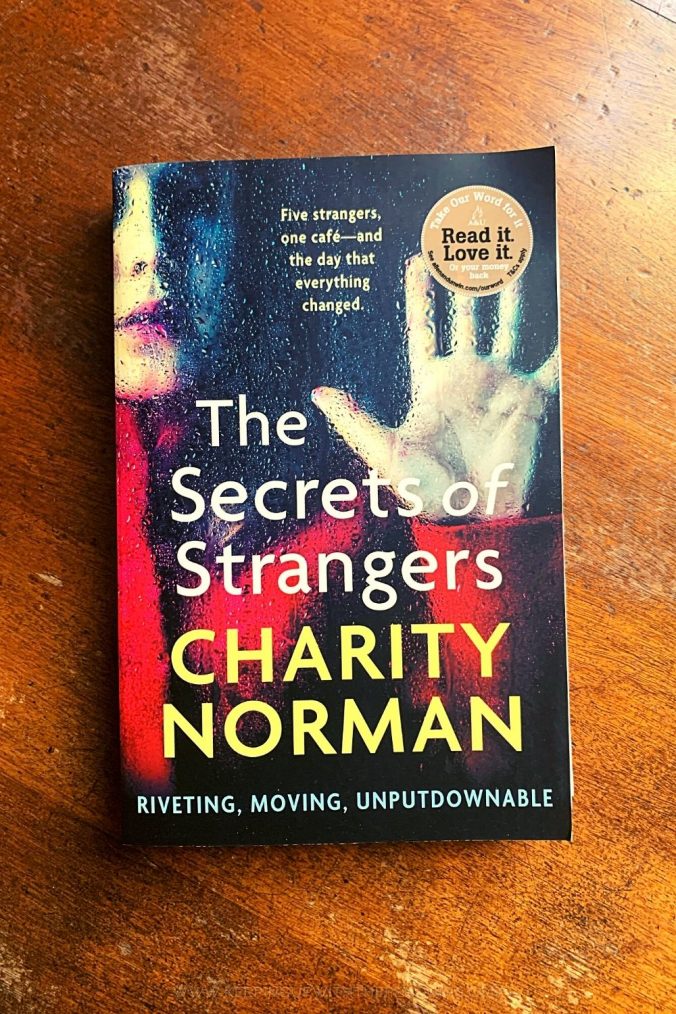 The Secrets Of Strangers – Charity Norman

So, I’ve had The Secrets Of Strangers sitting on my shelf for… a while. Like, years. I received an advance copy back in March 2020. My apologies to Allen & Unwin for the delay in getting to it, but in my defense, a lot of things slipped past the goalie for all of us that particular month.

I was curious about The Secrets Of Strangers because it sounded, from the blurb, a lot like what happened the day of the Lindt Cafe siege here in my city, except that it’s set in London (and it turns out, having read it, it’s not all that similar at all).

It’s a busy morning at the Tuckbox Cafe when a young man walks in with a shotgun and fires. Most people manage to scatter, but a small group are trapped and become hostages. Over the course of the novel, their histories and secrets come to the surface.

Neil is an older man, sleeping rough with his dog, Buddy. He came to the Tuckbox Cafe just looking for some warmth and some tea on his birthday.

Abi is a lawyer, running late to court. She’s defending a woman who shook her infant child, on the same day she finds out her fifth cycle of IVF hasn’t resulted in pregnancy.

Mutesi is a grandmother who works as a carer in a nursing home, and has seen more than her fair share of loss. She’s just coming off a night shift, and she meets her daughter-in-law and grandson at the Tuckbox, as she does every week.

Rosie is one of the cafe staff members working when the shooting starts. She also happens to be sleeping with her boss. She hides in the kitchen cupboard, terrified, for hours.

Sam is the gunman, a camel whose back has broken under one too many straws.

Outside of it all is Eliza, a hostage negotiator with young kids at home, charged with getting everyone – including the gunman – out of the Tuckbox Cafe safely.

The stories of all of these characters – hostages, hostage-taker, negotiator – are told in alternating viewpoints across chapters. The plot is a lot more character-driven than you might expect of a crime thriller. The Secrets Of Strangers isn’t so much about the events in the cafe itself as it is what led up to them, and what’s motivating each of the characters as the situation unfolds.

I actually really appreciated how Norman depicted how long and (believe it or not) boring these situations can be. Adrenaline can only rush for so long; after a while, your mind starts to wander, you need the bathroom, you get thirsty, your phone goes flat. When a siege stretches into its eleventh or twelfth hour, as it does in The Secrets Of Strangers, people get tired and the dynamic shifts. There isn’t a neat narrative arc playing out.

Allegiances shift over the course of the novel, too. Your perception of who the “real” villain is will likely change. I’m not sure how I felt about that, though. The resolution felt simultaneously too neat and a bit problematic (IYKYK). The Secrets Of Strangers had a hurt-people-hurt-people, sympathy-for-the-devil type of message, and I just didn’t really vibe with it. But it was a compelling read nonetheless, and Norman clearly has a real talent for writing page-turners.

Pick up The Secrets Of Strangers when you want a beach read on the grittier side that you can devour in a day.

My favourite Amazon reviews of The Secrets Of Strangers: