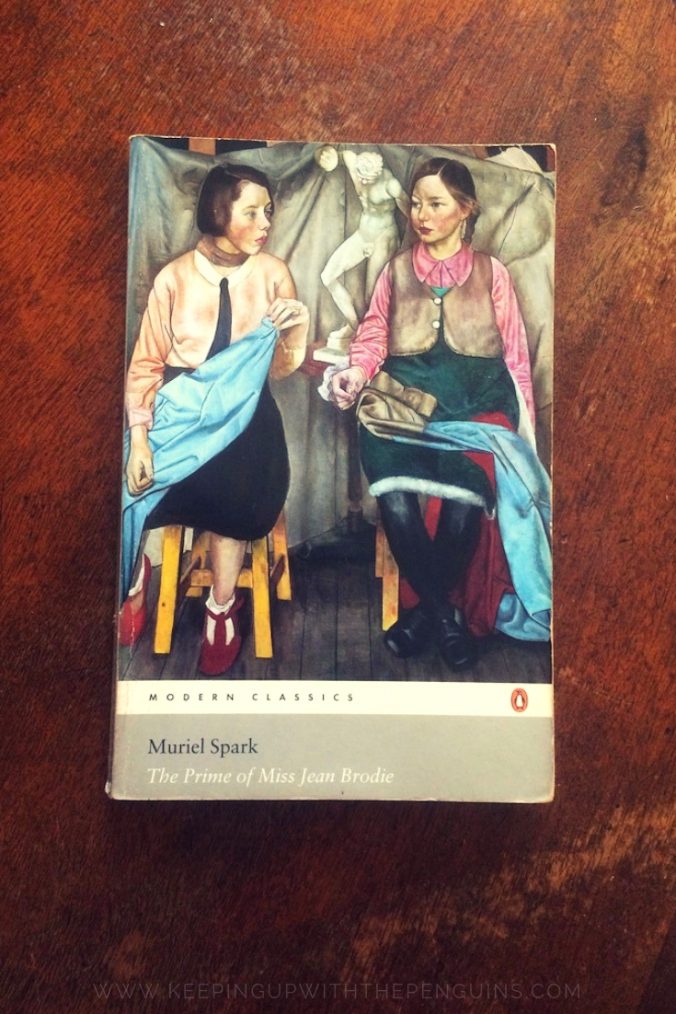 I managed to score this Penguin Modern Classics edition of The Prime of Miss Jean Brodie at a market stall, for the princely sum of just $5. I’d been searching for it for so long, I’d happily have paid four times that. According to the author bio, Muriel Spark was pretty damn prolific, and yet this is the only book of hers that I’ve ever come across – and it was bloody hard to find! It’s definitely the best-known of her works, first published in The New Yorker, and then as a book by Macmillan, in 1961. The introduction promises: “… a sublimely funny book. It is also very short and has much to say about sex.” Honey, once you’ve made the sale, stop selling.

It opens in 1930s Edinburgh. The titular Miss Jean Brodie – who is, indeed, in her prime, and doesn’t waste a chance to remind you of that fact – is a teacher at a school for girls. She has selected for herself six ten-year-old students, her special favourites, the “Brodie set”. It was a funny change of pace going from The Thirty-Nine Steps, which had an almost entirely male cast, to The Prime Of Miss Jean Brodie, which (by nature of its setting and its story) is almost entirely female.

Under Miss Brodie’s mentorship, these six girls (Sandy, Rose, Mary, Jenny, Monica, and Eunice) learn all about world travels, love, and fascism. Yep, apparently that’s the new reading, ‘riting, ‘rithmetic, and it’s one heck of a combo! Miss Brodie finds herself entangled in a dramatic love triangle with her colleagues: the singing teacher, Mr Gordon Lowther, and the handsome one-armed (married!) war veteran, Mr Teddy Lloyd. It’s Lloyd that really gets Miss Brodie’s motor running, but ultimately she turns him down. He is married, after all, and she has some self-respect. She embarks on an affair with Lowther instead, probably closing her eyes and thinking of her one-armed Teddy all the while…

Anyway, the girls grow up (as kids are wont to do), but they maintain the close bonds they formed under Miss Brodie’s tutelage, and she keeps having them all around for tea and whatnot. The headmistress at the school, Miss Mackay, is not a fan of Miss Brodie’s teaching methods and the course this is all taking (hard to imagine why), so she starts throwing a few tea parties of her own, trying to gather dirt from the girls that would give her grounds for dismissal. Sudden unemployment sure does put a quick end to a woman’s “prime”, eh?


Now, The Prime of Miss Jean Brodie does have a jumpy timeline, which normally I’m not inclined to enjoy, but I actually didn’t mind it so much in this case. One of the “flash forwards” in the story reveals that one of the Brodie set will ultimately (gasp!) betray their patroness, dobbing her in to the headmistress… but doesn’t show the reader which one. It was really cleverly done by Spark, and added an extra air of mystery and suspicion to the whole thing.

Anyway, back in the regular timeline, poor Teddy is still lusting after Miss Brodie, and (prepare yourself for an avalanche of creepy) he starts having the girls from the Brodie set come around and pose for his portraits. He ends up drawing all of their faces as his lady love *vomit*. Let me say that one more time for the cheap seats in the back: this teacher literally paints Miss Jean Brodie’s primey head onto the bodies of her pubescent students. Isn’t that the grossest thing you’ve ever fucking heard?! And yet, they all seem like they’re cool with it! Miss Brodie’s pretty damn flattered, even. She pulls a few strings, trying to egg Rose on to having an affair with the creepy old guy, figuring the young girl would be an adequate distraction from all of her prime-ness… but Teddy ends up sticking it to plain ol’ Sandy, instead, much to everyone’s surprise. Oh, and while all this is going on, Lowther dumps Miss Brodie. Pretty understandable really, given everything.

And this is where Miss Brodie really fucks up: she accepts a new member to the Brodie set, Joyce Emily. This newbie seems open to the whole fascism thing, so Brodie fans the flames, encouraging her to run away and fight in the Spanish Civil War on the nationalist side. Of course, Joyce Emily follows the suggestion… and is promptly killed en route. Yikes!


Sandy has become Miss Brodie’s confidante, so she gets all the inside scoop on this turn of events, all the while still fucking the teacher that paints his lover’s heads on students bodies (I’m sorry, I can’t get over that, it’s just so icky, and NONE OF THEM SEEM TO CARE! WHY?!). Sandy’s interest in Teddy wanes over time, but her Swimfan-y obsession with Miss Brodie reaches boiling point. She winds up approaching the headmistress, giving her all the dirt she has on Miss Brodie, which (it turns out) is enough to get her fired. Then the little betrayer converts to Catholicism and becomes a nun, Miss Brodie dies never knowing that Sandy ratted her out, the end.

Now, maybe I’ve been at this reading-and-reviewing-the-classics game a little too long, but I couldn’t help reading this as a religious allegory. I mean, I don’t know dick about religion, so I could be way off-base, but hear me out: Miss Jean Brodie is Jesus (right?), and she gathers all these disciples (students) around her, and goes about preaching an alternate worldview, until Judas (Sandy) betrays her. That’s about right, isn’t it?

Even if it isn’t, The Prime Of Miss Jean Brodie is ultimately a story about loyalty. You can tell, because Sandy keeps on repeating “it’s only possible to betray where loyalty is due”, which is an interesting moral philosophy in and of itself. It’s also a funny book, in the way that Jane Austen’s Emma was funny: I didn’t laugh out loud, but I appreciated how it was witty and clever. And damn, Spark manages to cram a whole lotta story into very few words: this review is about as long as the book!


If you haven’t already had your fill of creepy for the day, here’s the final serve: Miss Jean Brodie is based on a real person! Christina Kay was Spark’s teacher for two years at James Gillespie’s School For Girls, and Spark credited her with encouraging her burgeoning talent for writing. Spark, like Sandy, also later converted to Catholicism. No word on whether the perverted painting and underhanded betrayal parts are true-to-life, but they do say “write what you know”…

The Prime Of Miss Jean Brodie will give you a lot to chew on; don’t be fooled by how short it is! It’s definitely worth a read. It’s unlikely to become your special all-time favourite, but it will stick with you for a while. I’m selfishly hoping you’ll all read it and be creeped out as I am, if for no other reason than to validate my feelings! It can’t just be me… right?

My favourite Amazon reviews of The Prime Of Miss Jean Brodie:

The Best Classics For Your Beach Bag

8 Most Annoying Characters In Literature