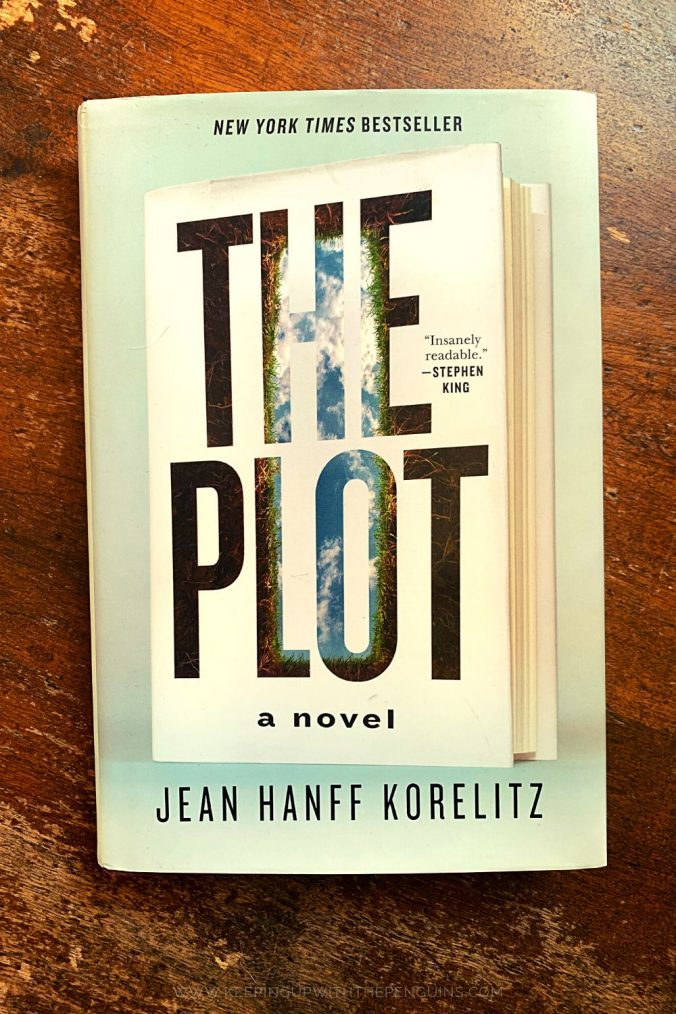 The Plot has a jaw-dropping, amazing, oh-my-I-must-read-this-immediately premise. I challenge any booklover or creative type not to immediately run out and grab a copy once they hear it: can’t be done! As per the blurb, The Plot is “a psychologically suspenseful novel about a story too good not to steal, and the writer who steals it”.

So, get this: at Ripley, an arts school in regional Vermont, once-promising writer Jacob Finch Bonner is languishing as an instructor in a low-residency fine arts program. He calls it a “special purgatory” for washed-up writers like himself, teaching fiction writing to students like Evan Parker – arrogant, self-indulgent, with no idea the misery that awaits them in their dream careers.

Evan Parker’s writing extract doesn’t seem like anything special, no different to the dozens of extracts Jacob Finch Bonner has to read every year (are you getting that he’s cynical, yet?). But in a one-on-one workshop, Evan Parker describes the plot of the book he’s planning to write, and… it’s stupendous. (Korelitz very cleverly talks around it, describing but not revealing this magnificent plot to the reader, at first.)

And here’s where The Plot gets interesting. Evan Parker dies, sadly and suddenly, not long after the workshop concludes. He passes without ever having published his game-changing bestseller-for-sure novel.

Three years later, Jacob Finch Bonner has written and published the story as his own. It’s gone on to have all the success that Evan Parker predicted it would: top of the best-seller lists, film adaptation in the works, and a spot in Oprah’s book club. All seems to be going well, until Jacob Finch Bonner receives an email from TalentedTom@gmail.com that reads, simply: “You are a thief.”

Who could possibly know that he stole the plot? Who would care? What are they going to do with that information? You can see how The Plot sucks you in. This is a literary mystery of the highest order.

The emails keep coming, and then they escalate. TalentedTom creates a Twitter account, a Facebook page, and an Instagram feed. Jacob Finch Bonner’s neurosis and fear of being found out begins to eat him alive. As he tries to track down this person threatening to expose him, Jacob Finch Bonner is pulled further into his stolen plot than even he realises.

The tone of The Plot is like a snarkier version of Less – meets Crime And Punishment, meets I Know What You Did Last Summer. It’s a delightful take-down of the publishing industrial complex and the Writer As Martyr archetype, as well as a complex psychological portrait. As Elisabeth Egan wrote for the New York Times review: “If you’re a reader who likes stories where a terrible decision snowballs out of control, this book is just what the librarian ordered. Welcome to a spectacular avalanche.”

Apparently, the rights to a TV series have been secured, but I think The Plot really shines because it’s written in a book format. I’m not sure the story would shine on screen the way it does on the page, and the delicious irony of the skewering would be lost. So, if it’s ever made, I don’t think I’ll be watching.

What I will be doing, though, is looking for more books by Jean Hanff Korelitz! I’d not heard of her before reading The Plot, but I can see from her author bio that she has a decent back-list, so I shouldn’t have too much trouble tracking some down. If she can write something this five-star out-of-this-world great, she’s well worth closer attention.

My favourite Amazon reviews of The Plot: