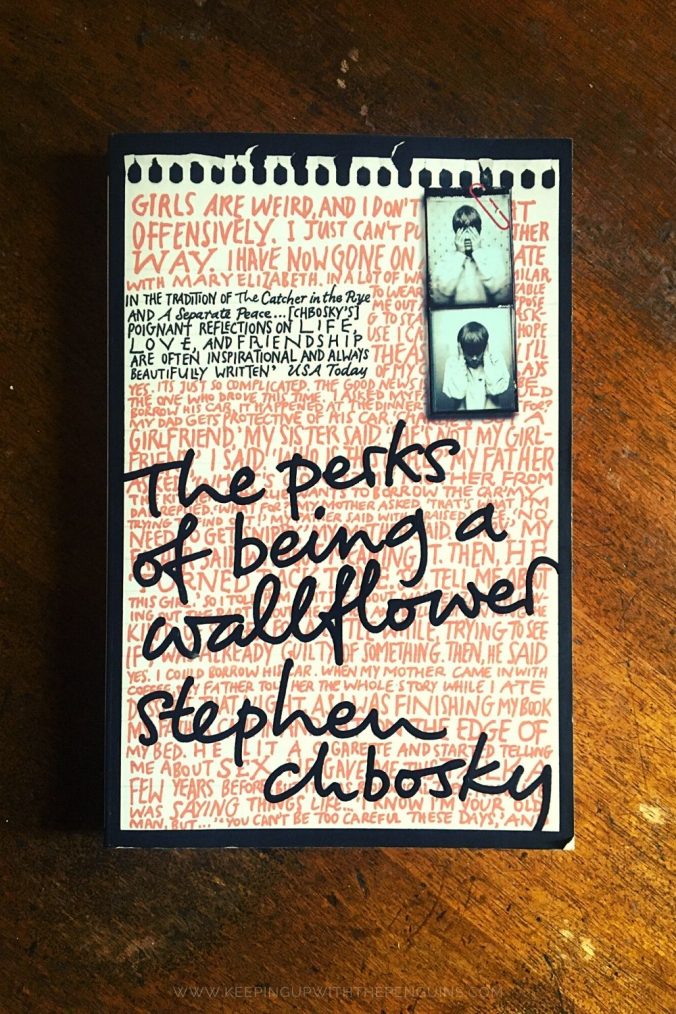 The Perks Of Being A Wallflower – Stephen Chbosky

I first became aware of The Perks Of Being A Wallflower via the 2012 film adaptation. I vaguely remember seeing it; it left the impression of being quirky but also a huge bummer. It turns out that Stephen Chbosky himself actually wrote and directed it (John Hughes originally held the rights, before he sadly passed away). Anyway, at some point I figured out it was a young adult book before it was a film, and picked up a copy for myself along the way.

The cover of The Perks Of Being A Wallflower promises “a deeply affecting coming-of-age story… in the tradition of The Catcher In The Rye“. It was first published in 1999, and it’s set in the early years of that decade, beginning in 1991.

Charlie is the titular wallflower: a shy, introspective, socially awkward teen, just starting high-school as the story begins. He begins writing semi-anonymous letters, addressed to “dear friend”, he says in the hopes of reaching “someone out there [who] listens and understands and doesn’t try to sleep with people even if they could have” (page 3). Seems reasonable enough!

Through these letters, Charlie’s story – and his unique perspective on life – unfolds. He’s very earnest and matter-of-fact, but he’s also surprisingly perceptive and insightful for a fifteen-year-old. My teenage diaries and letters were certainly more angst-ridden and self-indulgent, no mean feat considering Charlie’s history of mental health issues.

In these letters, to his mysterious and anonymous “friend”, Charlie makes mention of his periods of depression and “things getting bad” (mostly triggered, it would seem, by the sudden and unexpected death of his Aunt Helen in a car crash, and more recently that of his friend Michael, who took his own life). Charlie feels mostly alone in the world, but he doesn’t seem to mind so much; as he sees it, there are plenty of perks to being a wallflower (geddit?).

Eventually, he makes friends with two older kids from his school, Patrick and Sam. At first, it seemed they might just be taking pity on the weird quiet kid whose friend killed himself, but they proved me wrong. They adopt Charlie into their friendship circle as one of their own, and he has all of the slightly-less-than-wholesome high school experiences. He even develops a charmingly inappropriate and unrequited crush on Sam, who acknowledges it without ever embarrassing him.

Of course, the major problem with befriending older kids in high school is that they’re destined to grow up and get out long before you. That might seem like the logical climax towards which The Perks Of Being A Wallflower would build, but Chbosky always has something darker looming over it all. Charlie increasingly exhibits symptoms of PTSD (of course, that’s not the language he uses to describe it in his letters, but it’s clear that’s what’s going on), and it turns out his repressed trauma is something a lot more gnarly than you might expect. It all comes out when he finally gets His Moment with Sam, right before she leaves for college.

Ah, yes, the “big twist” reveal. It comes on subtly, and when it did I wasn’t sure Chbosky had really “earned” the feelings he was clearly hoping to elicit from the reader (see: the same problem as Daisy Jones And The Six). In essence, Charlie was sexually abused by his Aunt Helen as a very young child; that’s why his memory of the event is shaky, and also why his feelings about her death are so confused and troubling. The epilogue, Charlie’s final letter to his friend, reveals that he was discovered in a catatonic state after some kind of psychotic break that recalled his memories of the abuse, and he had to spend some time in a psychiatric facility. Sam and Patrick visited, and while he didn’t exactly live “happily ever after”, he finished up in much better shape than he started out.

I’m really not sure how I feel about child abuse being used as a “big twist” in a novel, but… for all its problems, I couldn’t stop thinking about it. Chbosky and Charlie’s story really got under my skin. Of course, this should serve as a huge stinky trigger warning, but for those of us who can stomach it, The Perks Of Being A Wallflower is a book that will stay with you, whether you like it or not.

I think Chbosky has a rare talent for writing in the voice of a teenager, about TeEn IsSuEs, in a way that doesn’t sound patronising. He said he wanted to address the question of why good people let themselves get treated badly, and I suppose he found an answer of sorts. He also said he incorporated many of his own memories of growing up in Pittsburgh, making The Perks Of Being A Wallflower at least somewhat autobiographical (though I hope not too autobiographical, ’cause… you know).

Naturally, because Chbosky wrote something relatively realistic about teens for teens, some parents got their knickers in a knot over it. The Perks Of Being A Wallflower has hit the American Library Association’s top 10 list for the Most Frequently Banned And Challenged books no fewer than six times. Apparently, some parents have taken issue with the book’s “pornographic content” and “vulgarity”, “homosexual themes”, and “glorification” of drugs and alcohol – as though teens would have no idea about any of that were it not for a book. Honestly!

I found The Perks Of Being A Wallflower to be a really affecting book, as promised by the blurb, and its effect certainly lingered. I also re-watched the film, and it totally holds up – still quirky and a bummer, as I remembered, but very well done. On the whole, if dark YA gets your motor running, this is one that should be top of your to-be-read list (if it’s not already).

My favourite Amazon reviews of The Perks Of Being A Wallflower:

10 Books That Will Stay With You Forever