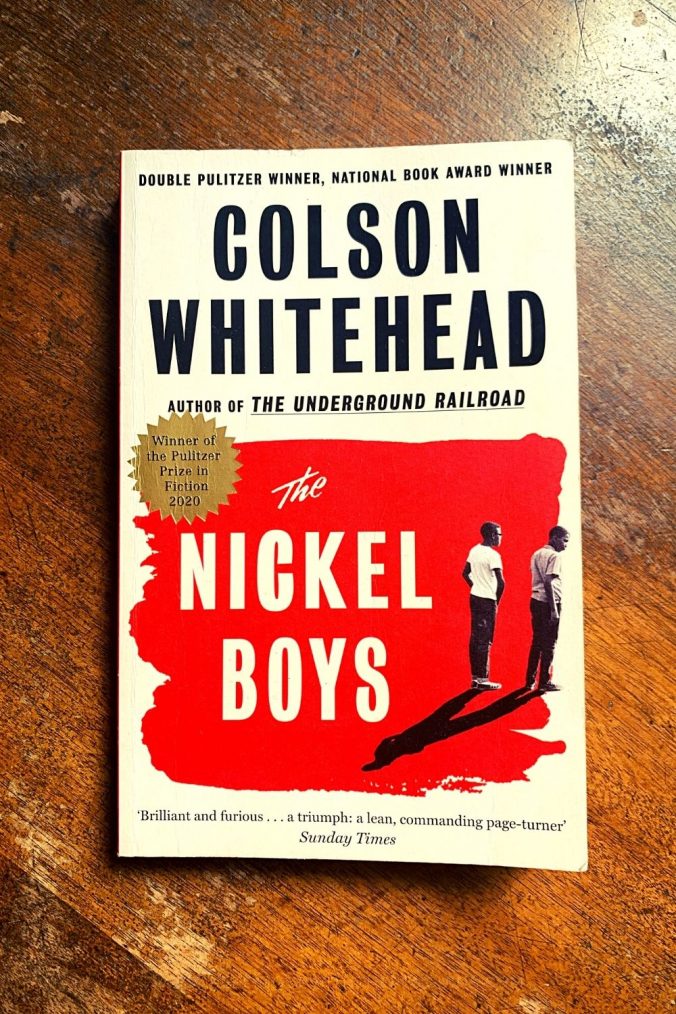 One thing (among many) I learned from reading The Underground Railroad is that Colson Whitehead has a unique talent for making the horrific feel compelling. In The Nickel Boys, he turns this talent to a Jim Crow-era segregated reform school, one that the Pulitzer Prize judges called “ultimately a powerful tale of human perseverance, dignity and redemption” when they awarded him the 2020 Prize for Fiction (his second win, making him only the fourth writer to get the gong twice).

The prologue sets up the premise of The Nickel Boys, with an academic investigation into the now-defunct Nickel Academy exposing the school’s secret horrifying history. When bodies are discovered, buried in unmarked graves, former “students” of the “school” begin coming forward to tell their truth.

In Part One, the story begins proper in 1960s Tallahassee. Elwood Curtis is a conscientious black teenager, with the kind of idealistic naivety that’s difficult to maintain past adolescence. An eagle-eyed teacher notes his intelligence, and pushes him to enroll in an accelerated learning program.

On his first day of classes, after a bike mishap, Elwood hitch-hikes to school. A black man picks him up, and all seems fine… until they’re pulled over. The car is stolen. Elwood is convicted (off-page, presumably as an accessory) and he is sent to The Nickel Academy.

Part Two begins as Elwood arrives at the segregated reform school. The educational standards are lax (ahem), the administration is corrupt (ahem!), and the staff don’t just overlook abuses – they actively participate in and encourage them.

Elwood remains idealistic, determined, calm – even after his first trip to the euphemistically-named Ice Cream Factory lands him in the hospital wing for weeks. He befriends Turner, a hardened, cynical, pragmatic boy, the perfect foible.

Elwood bides his time: he plans to serve out his sentence and “graduate” as quickly as possible, until he has a better idea. He sees an opportunity to shut down the Nickel Academy once and for all. He writes a letter detailing all of the corruption and abuses of the “school”, and hopes to slip it to an inspector – Turner ends up doing it for him.

Part Three of The Nickel Boys is set years later, to adulthood in New York – and holy heck, there’s a twist that I did NOT see coming. Beware of spoilers, all who venture past here…

Through flashbacks, we see that Turner learned the “school” administrators discovered Elwood’s insubordinate attempt to expose them, and planned to kill Elwood and bury his body off the books. He warns his friend, and the two of them escape with a haphazard plan. They’re tracked shortly after by Nickel workers, who fire on them – and Elwood is killed.

Yes, it turns out the adult Elwood is actually Turner, who adopted his dead friend’s name and tried his best to honour him in life. After the reveal to reader, Turner/Elwood confesses his true identity and history to his wife, and returns to Tallahassee to give testimony about the truth of the Nickel Academy and what really happened to his friend.

Whew! Whitehead is monstrously talented. I knew it all along, and yet reading The Nickel Boys was still a shock. He knows just when to pull your eyes away from a scene, to avoid reveling in the horror, which somehow makes it more impactful. He uses small details (like the Mexican boy who is shuffled between the “white” and “coloured” dormitories) to add incredible dimension. His prose, his pacing – all of it is deliberate, and masterful.

After writing The Underground Railroad, Whitehead said that he didn’t want to write “another heavy book”, but he felt compelled to do so after the 2016 election. He already had the idea for The Nickel Boys simmering, after learning about the real-life horrors of the Dozier School. He decided to narrow the scope, though, and ground the story, avoiding the fantastical and speculative elements of his previous novels.

I understand his basing it wholly and solely in the real, given the times and circumstances under which it was written—BUT the absence of the speculative element, the almost playful ideation alongside the horrific, means The Nickel Boys lacks the MAGIC of Underground Railroad. It’s excellent, but not magical. The critics didn’t take issue with that, though: New York Times writer Parul Sehgal said “Whitehead has written novels of horror and apocalypse; nothing touches the grimness of the real stories he conveys here”.

It seems laughably perfunctory to offer trigger warnings (the premise alone should give you an idea of what to expect), but in the interests of full disclosure: steer clear if explicit violence, school abuses (including sexual), and abundant racism are difficult for you. That likely means The Nickel Boys will miss a swathe of readers, but so be it – for those of us who are in a position to read it, it’s outrageously good.