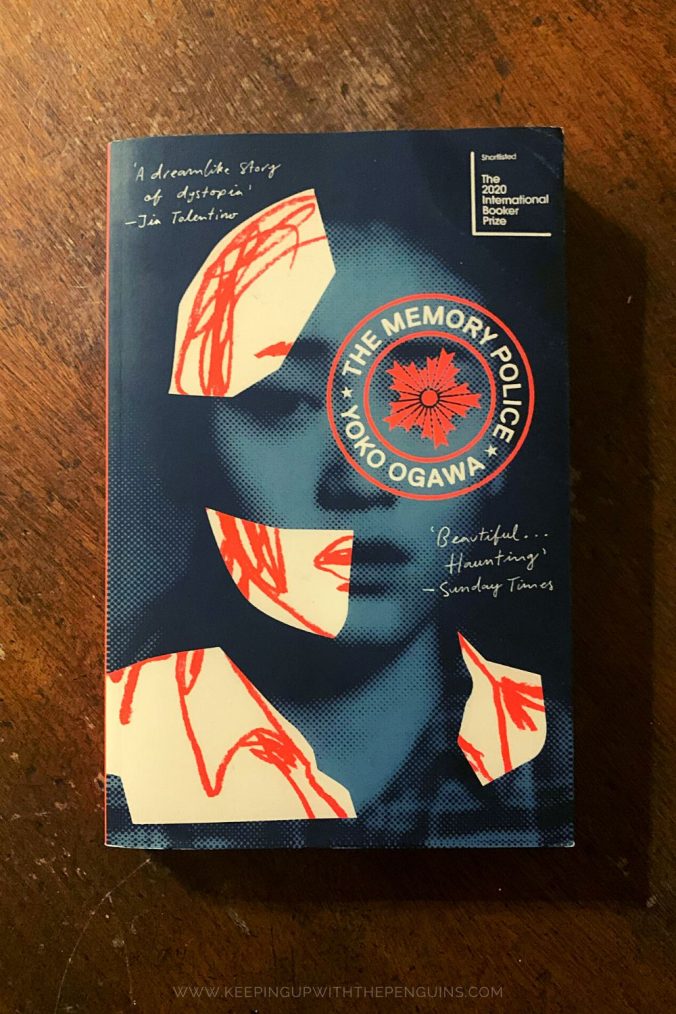 According to her author bio, Yoko Ogawa has won “every major Japanese literary award”, and yet I (along with a lot of other monolingual English readers) hadn’t heard of her until The Memory Police exploded on #Bookstagram. This 1994 science fiction novel (called 密やかな結晶 in the original Japanese) quietly trundled along until, in 2019, it was translated into English by Stephen Snyder. Soon, it seemed like EVERYONE was reading it – because they were.

The Memory Police is a melancholy Kafka-esque novel, one that clearly owes a huge debt to Orwell’s Nineteen Eighty-Four. The story is narrated by a novelist who lives on an island under the control of the titular authoritarian force. Through an unexplained and seemingly random mechanism, everyone who lives on the island is forced to “forget” objects or concepts. Uniformed enforcement officers patrol the island, making sure the “forgotten” items are truly gone and anyone who gives the appearance of remembering them is disappeared.

All kinds of things are “forgotten” in The Memory Police, and it’s difficult to discern a pattern. Perfume, stamps, birds, emeralds, ribbon – unusually for a dystopia, nothing “forgotten” seems inherently dangerous. Props to Ogawa for foregoing the heavy-handed metaphor of “forgetting” journalism or books, but the seemingly random array of everyday objects targeted is a bit of a head-scratcher.

What’s more, the narrator of The Memory Police isn’t one of the Special People who – again, for reasons unexplained, other than a couple of lines of dialogue about how it “might be genetic” – can remember things after they’ve been “forgotten”. Her mother was one, and kept a stash of “forgotten” objects in her artist studio, before she was disappeared.

R, the narrator’s editor, also reveals himself to be one of these Special Rememberers, about a third of the way into the story. The narrator, fearing that he might meet the same fate as her mother, takes him into hiding in a fitted-for-purpose hidden room of her house.

With all these factors combined, The Memory Police is basically a dystopia told from the perspective of the Chosen One’s side-kick.

I really wanted to enjoy The Memory Police, and find the wonder and meaning in it that others seem to, but I couldn’t shake the feeling that it was missing something the whole way through. There’s no explicit reason given in the story for the existence of the Memory Police, or why they make the whole population forget these apparently random objects. Without a narrative justification, it was hard to get invested.

Don’t get me wrong: the writing is great, the translation is well done, the characters and the setting are believable and well-crafted… it’s just missing something. I wish Ogawa had used something more than bog-standard suspense (about whether R would be discovered in hiding) to draw us in.

I don’t want to spoil the ending for people who haven’t read The Memory Police as yet, so I’ll say this on an IYKYK basis: I feel like the dramatic conclusion was meant to be shocking or significant or moving… but I couldn’t drum up anything more than mild interest. I suppose it felt a bit “too little, too late”, given how little I’d felt engaged by the story up to that point.

But, maybe it’s just me. The Memory Police was named a finalist in the 2019 National Book Award for Translated Literature, as well as making the shortlist for the 2020 International Booker Prize. It was also a finalist in the World Fantasy Award that same year. So, don’t let my underwhelmed response persuade you. Give it a go, and hopefully you’ll be able to tell me what I’ve missed!

My favourite Amazon reviews of The Memory Police: