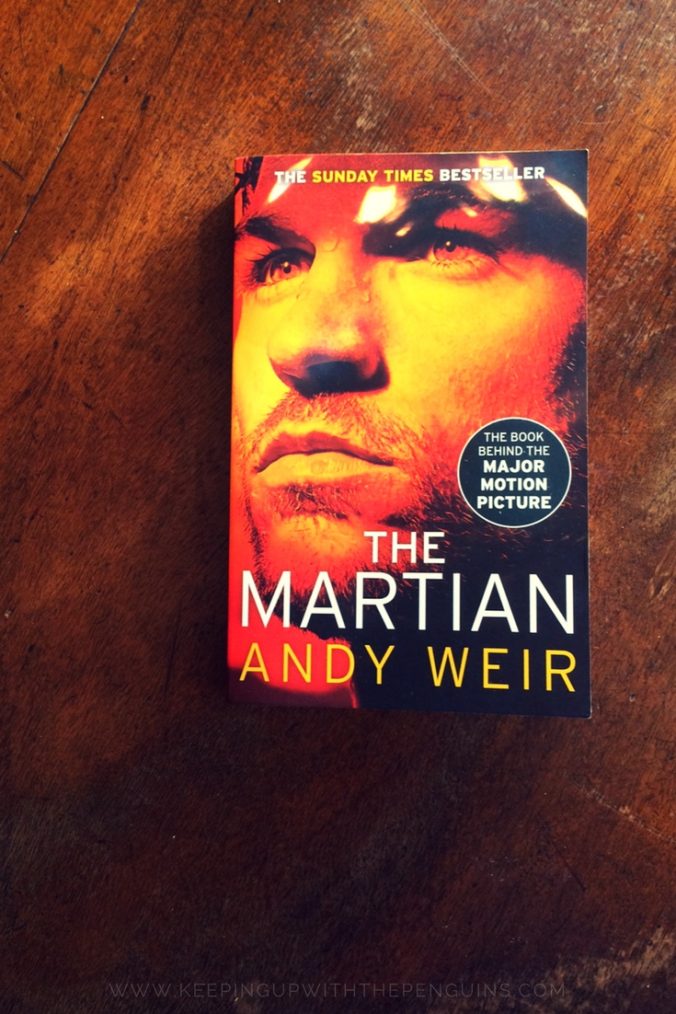 The Financial Times called The Martian “Gravity meets Robinson Crusoe“. Indeed, like Gravity, the most compelling thing about The Martian is its premise: an astronaut becomes stranded alone on Mars and has to find a way to make 30 days’ worth of supplies last for years, 220 million miles away from Earth, with no way to communicate. Our brains just aren’t wired to compute that kind of aloneness, so if you decide to read The Martian, be prepared for a bit of a mind-fuck.

Andy Weir began writing The Martian in 2009. He spent years researching (astronomy, space flight, orbital mechanics, botany) to make sure the book was as technically accurate as possible, based on today’s technology. Having been turned down by multiple literary agents in the past, Weir decided to go ahead and self-publish The Martian serially – one chapter at a time – on his own website. Within a few months, he had hundreds of fans requesting an eBook with the whole story, so he cobbled one together and put the first edition online for sale at Amazon’s lowest possible price point – 99 cents.

The Martian quickly sold over 35,000 copies (more than had ever been downloaded for free), which was enough to send it straight to the top of Amazon’s science fiction best-seller list. Of course, this caught the attention of the major publishers. Weir eventually sold off the rights piece by piece (first audiobook, then U.S. rights, then international rights).

All told, he made upwards of six figures, and The Martian had a second debut – in the twelfth spot on the New York Times best seller list for hardcover fiction. As if that wasn’t enough, in 2015, a film adaptation starring Matt Damon was released, and it took over $630 million at the box office. Weir is one of those “overnight success” stories that was years in the making.

So, back to the story: at the start of The Martian, American astronaut Mark Watney finds himself abandoned on Mars. His crew had to take the drastic step of an emergency evacuation, six days into their month-long mission, due to a dust storm. Watney got blown off course en route to the shuttle, and – believing him to be dead – they left him behind. Whoops!

Once everyone at NASA back on Earth figures out he’s alive, shit really hits the fan. But never fear: Watney is a (remarkably unflappable) botanist and engineer. He figures out a way to grow crops for food, and he retrieves a communications device from a previous unmanned mission to the red planet.

The opening chapters are a bit of an info-dump, but that’s hardly surprising given the subject matter. I’m not 100% sure I understood all of the technical specs that Weir threw at me, but I liked Watney’s “voice” as narrator. Even though it was written in the style of a mission log, it was really conversational. Then the point of view changed – to give the story of what was going on back on Earth – and it sounded not entirely unlike a Dan Brown novel.

There’s certainly a lot of interesting Mars facts in The Martian (well… duh). I learned that you can’t make or use a compass on Mars, for instance, because the red planet has no magnetic field. Still, far and away the most important thing I learned is that I am neither smart enough nor tough enough to survive on Mars. Seriously! If Elon Musk gets his way and we start colonising Mars in the next year or whatever, just go on without me. I’ll only slow you all down.

The rest of The Martian unfolds in a series of (fairly predictable) mishaps and misadventures. After several chapters of Watney explaining (in great detail) how important “the Hab” (an artificial habitat tent thing) is for his survival, of course it blows up. His potato crops die, and it looks for a minute like there’s a real risk that he’ll starve to death before anyone can pick him up. Other disasters include Watney accidentally destroying his communications equipment (he resorts to sending one-way messages to Earth by arranging Mars rocks into Morse Code), and NASA launching a re-supply rocket that explodes in the air.

Despite the dire circumstances, there’s only one moment where Watney really panics, as far as I can recall – he has nerves of steel and unfailing optimism, which is jarringly unrealistic but also kind of vital to the plot (I mean, there’s not much of a story in an astronaut rocking in the foetal position on Mars until he dies, right?).

In the end, the crew that left Watney behind are able to return and retrieve him (with just a few other disasters slowing them down). In his final log entry, Watney starts waxing lyrical about the human instinct to help others, and his utter joy at being rescued. I was kind of disappointed that the story ended where it did; to me, the really interesting part would have been Watney’s return to Earth, re-settling after a year of the most extreme kind of solitude (perhaps there’s a sequel in that?).

I’m sure Weir wouldn’t want me to describe The Martian as a comedy, but I found it really funny. It was a little scary at times, sure, and very interesting, but what sticks in my memory most is the number of times it made me laugh out loud. Watney was a fantastic narrator. He’s so likeable that Australian scientists have actually – like, in real life – named a new species of bush tomato after him (Solanum Watneyi). I’m not even kidding.

It’s a fun read, but it’s not life changing, and I’m not all that inclined to run out and purchase copies of everything else Weir ever wrote. Pick up The Martian if you’ve read too many heavy books lately, and you need a quick read with a few chuckles and a feel-good ending.

My favourite Amazon reviews of The Martian:

10 Rejected Books That Went On To Be Ridiculously Successful