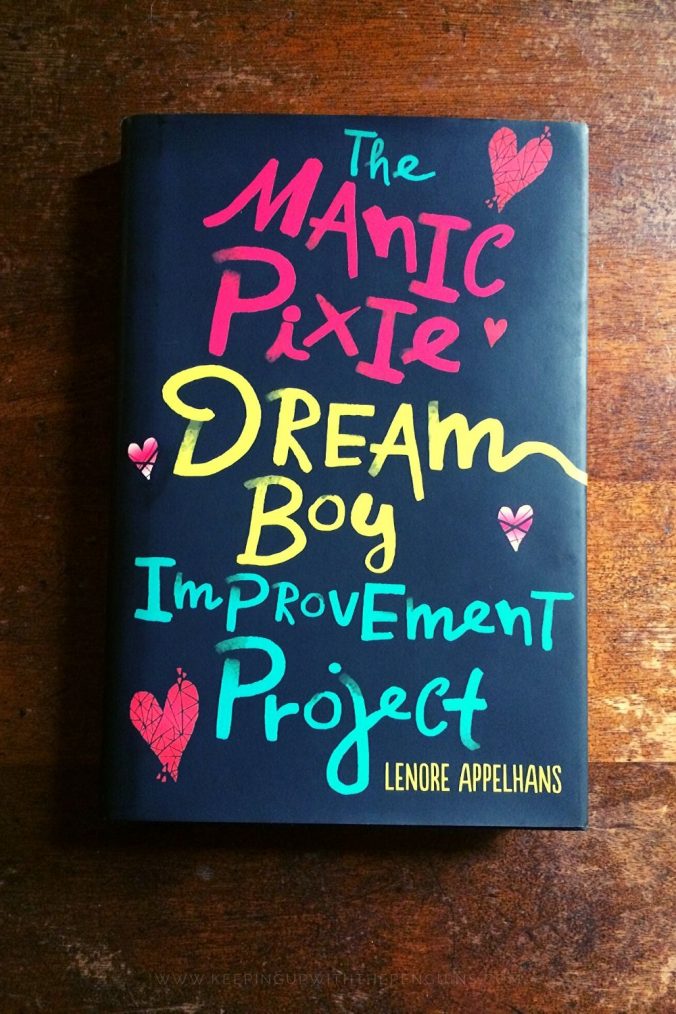 I always thought those book lovers that kept track of where exactly they got book recommendations were kind of going overboard. I mean, I love a spreadsheet tracker as much as the next person (ahem), but I didn’t think I needed to track where I first heard of a book – surely the crucial details, like title and author, would be enough? Well, I’m eating humble pie now, and kicking myself in the pants at the same time. I know I first heard about The Manic Pixie Dream Boy Improvement Project on a bookish podcast… but I cannot, for the life of me, remember which one! I’d really love to shout them out here, and thank them for putting me on to this gem of a book, so if there’s the tiniest chance any of you brilliant Keeper Upperers out there might recall being recommended this same book in that way (a stretch, I know!), I’d greatly appreciate you sharing in the comments.

(A quick sidebar for the uninitiated: a trope is a recurrent motif or character in books. Authors use as a kind of short-hand, to signal to the reader what’s happening in the story. So, for instance, if there are two equally-charming-but-very-different boys vying for one girl’s attention, you’re smack bang in the middle of the Love Triangle trope (and you can probably guess it’s going to end one way or the other). If you’re presented with a character who’s a force for good but truly only motivated by sex, money, or drugs, you’ve got yourself an Anti-Hero trope (and you’ll probably love him despite his flaws). See what I mean?)

(And, a sidebar to the sidebar: the moniker of the Manic Pixie Dream Girl was first used in a review of the 2007 film Elizabethtown, but the trope itself has existed far longer. Critic Nathan Rabin described Kirsten Dunst’s character in the film as such: “The Manic Pixie Dream Girl exists solely in the fevered imaginations of sensitive writer-directors to teach broodingly soulful young men to embrace life and its infinite mysteries and adventures.” Basically, their only job is to be quirky and fun love interests, and get the boys to live a little. So, that should give you enough context…)


But back to the story! Riley, as I said, is a Manic Pixie Dream Boy, a trope created to counter-balance the sexist origins of the Manic Pixie Dream Girl trope (it turns out boys can exist in stories solely to justify the development of another character just as well as girls, who knew?). There was one other Manic Pixie Dream Boy in TropeTown, Finn, but he was “terminated” under mysterious circumstances. “No one really knows what happens when you’re terminated,” Riley explains. “You board a train on the outskirts of town. The train always comes back empty.” And Riley might find himself terminated, too, if he’s not careful.

See, Riley’s job as a trope is simply to turn up when summoned by an author, and perform his role as a trope while the Developeds (central characters who get actual depth) progress through the story. But he’s been going off script, taking his character beyond the bounds of Manic Pixie-ness, and his authors are getting pissed. They’ve made a complaint to the TropeTown Council, who stick Riley in group therapy, alongside a bunch of similarly-disgruntled Manic Pixies. They’re all restless, seeking a level of autonomy never afforded to their kind. Riley feels like they’re all capable of more than just regurgitating cliches, but he also knows he needs to “accept [his] place in the narrative hierarchy” and do as he’s told. Thus, the book’s title: this is The Manic Pixie Dream Boy Improvement Project.

It might all sound dreadfully complicated, but please don’t write this one off! I swear, any confusion is my fault entirely. Appelhans has done an incredible job of weaving a clever and complex world in a very accessible way, right down to including a map of TropeTown in the opening pages (which is, in itself, a delight – the Villains live in an area literally called “The Wrong Side Of The Tracks”, lol!).


I don’t think it will surprise you to learn that this book is very meta: not so much so that it detracts from the reading experience, more like it gives you the feeling of being in on the joke. Riley often breaks the fourth wall, speaking directly to the reader, and displays a comic level of self-awareness in his role. The tone is always lighthearted, quirky and zany as we’d expect of a Manic Pixie story, but don’t be fooled: at its heart, The Manic Pixie Dream Boy Improvement Project is actually a searing literary (and, by extension, social) critique.

Take, for example, the repeated digs at beloved YA author John Green. Riley’s most successful role to date was playing “Romantic Cancer Boy” (a very obvious nod to The Fault In Our Stars). The Manic Pixie-cum-Mean Girl Nebraska is the only one of the therapy group to have had a titular role (again, a not-subtle poke in the ribs to Green’s Looking For Alaska). The Manic Pixie trope is so pervasive and evergreen in young adult fiction, the jokes work in seamlessly, but I still applaud Applehans for being brave enough to go after the king and leaving herself barely any room for plausible deniability.

The parody, of course, could not be complete without a love story, a mystery, and lots and lots of wacky adventures – and The Manic Pixie Dream Boy Improvement Project has all of those in spades. Nevertheless, the book never felt repetitive or cheesy. The cliches were employed sarcastically, the humour was wry, and even for all the zaniness, the central message was still one that I can get behind: we all need to take a long, hard look at whose stories get told, and how (an especially timely question in the bookish world). Towards the end, Appelhans even wades into that ever-dangerous territory of addressing “problematic” tropes: Uncle Tomfoolery, the Magical Negro, and so forth. I think she handled that combustible subject matter superbly, too.

I suppose The Manic Pixie Dream Boy Improvement Project is technically itself a YA novel, but I would really resent it being pigeon-holed. I think this literary send-up would be a wonderful read for book lovers of all ages, guaranteed to delight, entertain, and provoke indiscriminately.