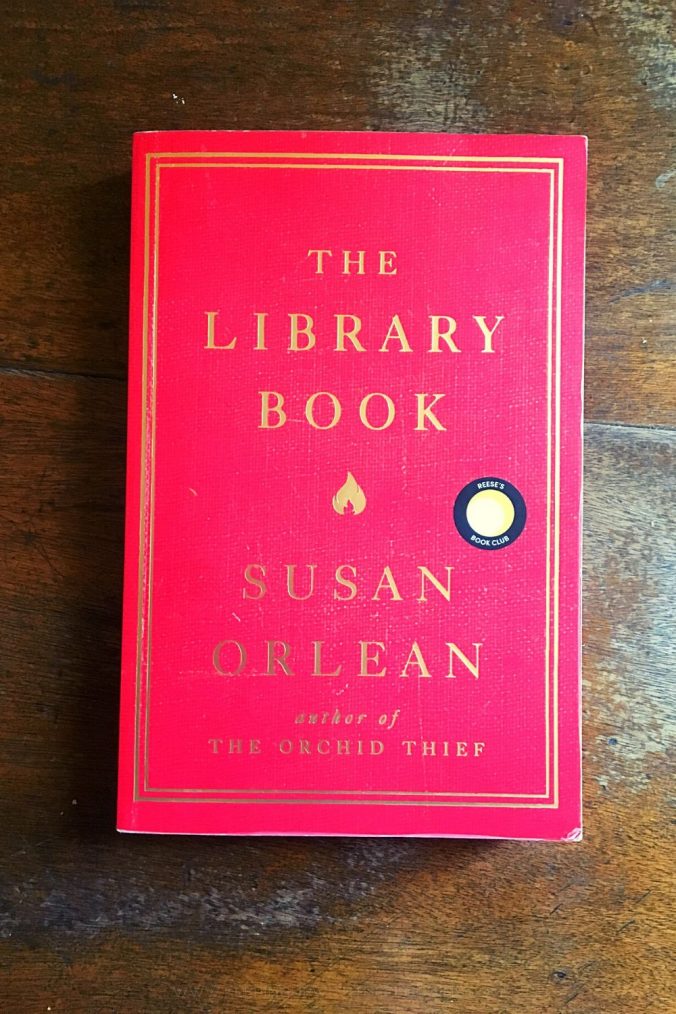 Susan Orlean made international headlines, and won herself a legion of new fans, earlier this year when she posted a series of unabashedly drunken tweets lamenting the state of the world. She’s well deserving of the recognition, of course, but there are plenty of us who were well enamored with her long before she had one too many wines at her neighbour’s house. I’ve been crazy about her ever since I picked up The Library Book earlier this year, her account of the 1986 Los Angeles Central Library Fire.

Never heard of it? Neither had Orlean, until she moved to Los Angeles and took a tour of the Central Library building. Her tour guide pulled a book from a shelf and smelled it (slightly odd, but not beyond the pale for book lovers). Then he said he could “still smell the smoke”, and that’s what piqued Orlean’s interest. She thought, at first, that he meant the remnants of a time when patrons were allowed to smoke cigarettes in libraries. But, no: he was talking about the suspected act of arson that set light to the library on the morning of 29 April 1986, the fire that burned for several hours, the same one that destroyed over 400,000 books and damaged several hundred thousand more. No one was killed, but fifty firefighters were injured.

‘Hang on,’ Orlean thought (as I’m sure you are right now), ‘if the fire was that big, why hasn’t anyone heard about it?’. Check the date: it was drowned out of the news almost immediately by the Chernobyl disaster. And thus, the biggest library fire in the history of the United States was all but forgotten – and the suspected crime remains unsolved.

That’s not to say there were no suspects. Orlean begins The Library Book with a profile of Harry Peak, the man who led police on a wild goose chase throughout their investigation. He is described as being “very blonde” by his lawyer, and “the biggest bullshitter in the world” by his sister – make of that what you will. Orlean reads reports, transcripts, interviews friends and relatives, to find out everything she can about Harry Peak… but even then (spoiler alert), she can’t definitively answer – nor can anyone else – the question of why, or even whether, he would set fire to the Los Angeles Central Library.

The Library Book is, at its bones, a true crime story, interrogating who could have possibly started such a fire, and why. That said, it’s a long way from the feigned objectivity or omniscience of a book like The Arsonist. Orlean’s writing is memoir-esque, interweaving her own recollections of childhood library visits, and also incorporating extensive local history, including the socioeconomic and political complexities of the city of angels.

Now, I’m going to put a very important warning right here: do not read The Library Book if your friends and family will not take kindly to being bombarded with “fun facts” for at least a month. I made a grave error in choosing this book to accompany me when I was a passenger on a road trip. By the time we reached our destination, my fellow travellers were ready to set me on fire. Every few minutes, I’d say “Oh, wow! Did you know…” They were interested, at first, but after a while it wore thin, and soon my gasps of fascination were met with exhausted groans. So, there you go. You’ve been warned.

Orlean leaves no stone unturned, which is what makes The Library Book such a trove of delight and wonder for book-lovers and library patrons. She turns up everything from the history of libraries, the growth of Hollywood, the bust of the Depression, the psychology of arsonists, the physics of book burning (she even burned a copy of Fahrenheit 451 herself, for research!), the lives of the librarians who worked in the building (right down to their preferred brands of cigarettes)… she spent six and a half years researching this book, and it shows. And yet, she doesn’t simply dump it all in your lap; she delivers it, seamlessly, in a page-turning book that offers a kaleidoscopic view of a library and the terrible crime that occurred there (probably).

I’m sure you’ve deduced as much by now, but I’ll say it for the record: The Library Book is a highly Recommended read here on Keeping Up With The Penguins. It’s a must for any library-goer or book-worm. And, in a year when libraries have been beaten and bruised by pandemic restrictions coupled with the increased demand of the disadvantaged communities they serve, there is surely no better time to read a love letter the public library system.

Do you use your local library? Either way, you might want to check this out.

My favourite Amazon reviews of The Library Book:

How To Read Audiobooks