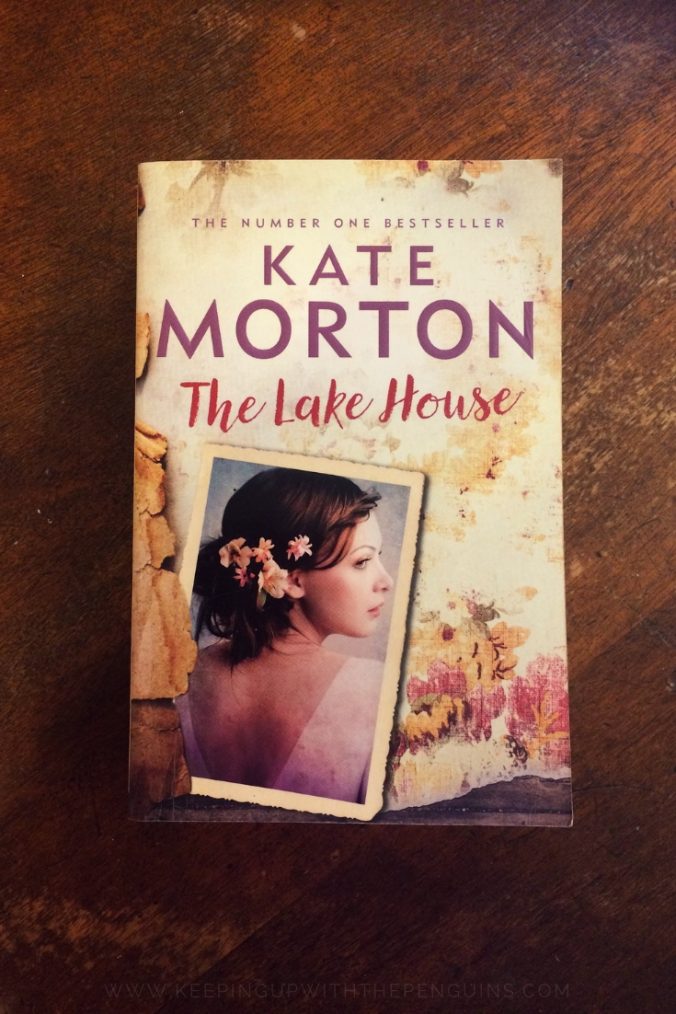 Once again, I’ve reached a point where I’ve read too many dead white dudes back-to-back. I need to get back to lady business! It’s one of the most important lessons that I’ve learned in the course of the Keeping Up With The Penguins project: variety is really important to me in my reading life. If I read too many of the same kinds of books in a row, it makes me feel like a caged animal. So, this week, I turn to an Australian woman writer to break me out: Kate Morton, with her international best-seller The Lake House.

The Lake House is Morton’s sixth novel, published back in 2015 (The Clockmaker’s Daughter is her most recent offering, and it made a real splash at the end of last year). She is one of Australia’s biggest literary exports since Colleen McCullough, with international sales at ten million books and growing. Every single one of her titles has made the New York Times Best Seller List. She’s also, for some strange reason, really big in Canada. So, my expectations going into this one were pretty high.

Morton and I actually have quite a bit in common. She’s a fellow Queenslander-by-birth, and we both grew up loving Enid Blyton and dreaming about snowy England and adventures in moors and forests with the Famous Five and the Secret Seven. When she sat down to write The Lake House, she was based in Brisbane, but she decided to set the story in Cornwall as a kind of tourism-of-the-mind experiment.

Perhaps she got swept away with her life-long romanticisation of the English landscape, perhaps she’s just naturally wordy: either way, her writing in The Lake House was extremely descriptive right from the outset. In practically every sentence, she described a smell, a sight, a taste, or a sound. That doesn’t bother me at all – I’m more than happy to read a doorstop novel that describes every facet of a world (real or imaginary) – but I know it gets up some readers’ noses, so I thought I’d offer a warning straight-up.


What did bother me, though, was the bloody timeline(s)! There were three, for crying out loud! And all told from different perspectives! The 2003 timeline focuses on a detective called Sadie, the 1933 focuses on a young aspiring writer named Alice, and the 1914(ish) timeline focuses on Alice’s mother, Eleanor. And, if that’s not tricky enough, they all criss-cross and overlap, so you end up reading Alice’s 2003 story and Eleanor’s 1933 story as well. Oy! I understand why writers do this – they’re being very clever, drip-feeding the story to the reader, et cetera, et cetera – but having to triple-check the dates at the beginning of each chapter, and flip back-and-forth to piece together the chronology for myself, really takes me out of it. Hmph!

I’ll straighten out the timeline as best I can for the purposes of this review, but it ain’t easy. Also, spoilers abound, yadda yadda yadda – this book is recent enough to warrant at least a perfunctory warning.

Back in 1914, a young woman (Eleanor) fell in love with a bloke, married him, and popped out a few kids (one of them being Alice, the would-be writer). Hubby went away to war, came back a bit upset, but he seemed mostly okay. In 1933, when Alice was 16, they threw a “Midsummer Eve” party, but it all went to hell when their youngest child (Theo, an infant) disappeared while everyone was out having a good time. Yikes!


Alice, at the time, blamed herself for the disappearance. She was in love with the family’s gardener, and showed him a book she had written about how to kidnap a kid without getting caught. And, surprise surprise, the gardener goes missing at the same time as the kid. She never mentions any of this to the cops, though, and she spends her whole life trying to put it behind her by building a fabulously successful literary career.

The family home sits abandoned for decades, until 2003, when Sadie – a police detective on “enforced leave” for speaking to journos about a case she believed her department bungled – comes across it while out on a run. She does a little digging, and hears about the (still unsolved) case of the missing child. She starts asking questions, trying to figure out what the heck went down that night, and follows her nose through the whole mystery.

Yes, it’s a mystery novel, but one set outside the system of law enforcement. I appreciated that Sadie was, y’know, a lady, and not a gruff, cynical, end-of-his-career, whiskey-swilling male detective. That was the main basis of The Lake House‘s appeal, to be honest. Also, despite the sex-and-death stakes, this is actually a very “clean” read. All the dirty bits take place out of sight for the reader, so if that’s your preference in literature you’re onto a winner here.


Morton uses a third-person perspective the whole way through, but privileges each of the main characters in their own timeline, which really cleverly highlights the different perspectives each character has on the “truth” of the matter. It turns out Alice wasn’t the only one who blamed herself for Theo’s disappearance – both of her sisters also had reasons to believe they caused the kidnapping in some indirect way, and they all felt very differently about their mother’s behaviour (and Eleanor, of course, thinks of herself in much kinder terms than any of them). Morton weaves in various subplots and unspoken character motivations, which leads to her effectively braiding the three stories together (the story of a missing child, the story of an abandoned child, and the story of an adopted child). That’s in addition to the standard mystery-trope red herrings and big twists. So, I can concede that The Lake House wouldn’t have worked if Morton had tried to tell the story in any kind of chronological or linear style (but the jumpy timeline was still bloody annoying).

Morton has said that she long wanted to write a story about a child’s disappearance. Most readers would (reasonably) assume that she drew her inspiration from the disappearance of the Lindbergh baby (which also happened in 1933), but she has said she was actually thinking more of the case of the Beaumont children, who disappeared here in Australia in 1966. It’s clear that she had motherhood on her mind as she was writing; indeed, she was pregnant with her youngest child at the time, and it really comes across in the pages (and pages!) she devotes to the bond between mothers and infants. But that’s not to say that all of the mothers in The Lake House are Virgin Mary types, far from it! In fact, all of them are strong, but deeply flawed, and they spend a lot of time feeling sorry for themselves for various reasons.

The World Wars (both I and II) also play major roles in the narrative, and serve as turning points in the plot. When Alice’s father/Eleanor’s husband returned from WWI, he was actually far more “shell shocked” than he initially appeared, with attacks of grief and anxiety and anger that could turn violent. WWII, later in the story, kills one of Alice’s sisters, preventing her from revealing what she knows of Theo’s disappearance.


In fact, each of the sisters held one of the keys to the big mystery of Theo’s disappearance – if only they’d been capable of communicating like fucking grown-ups, the whole mess would have been sorted out long before Sadie came along. I’m going to give you a pared-down version of what happened (apologies to Morton). Deborah, the eldest sister, knew that her father was experiencing severe symptoms of shell shock that couldn’t be controlled and put all of the children at risk. Alice knew that the object of her affections, Ben Munro (the family gardener), was familiar with strategies for making a child disappear, had the means to make it happen, and coincidentally had a barren friend who desperately wanted a child. Clementine, the youngest sister, knew that Eleanor (their mother) was having an affair with Ben Munro The Gardener, and (once she grew up a bit) could have connected the dots and worked out that Theo was in fact Ben’s son, not their father’s. Yep, Eleanor was screwing the help, and it all ended in tears. If Clementine had lived long enough to tell Alice that part of the mystery, and Alice in turn had passed it on to Deborah, it all would have come to a head quite quickly.

Instead, it took an outsider with her own axe to grind sticking her nose in where it didn’t belong. Most of The Lake House is iterations of Sadie trying to get the remaining sisters to spill their secrets and sorting through the red herrings. Oh my goodness, so many red herrings! There isn’t a single character Morton didn’t want the reader to think did it, at one point or another. In the end, Sadie gets to the truth of it: Eleanor and Ben “kidnapped” Theo, to save him from the wrath of Eleanor’s shell-shocked husband, whom they feared would hurt the kid in one of his turns. And it turns out (drumroll please) that Sadie’s own grandfather is the long-lost Theo. There you have it. Everyone’s a winner!

(Oh, and Morton totally ripped off my “whydunnit” phrase, which you’ll recall I trademarked back when I reviewed In Cold Blood. Either that, or I’m not as brilliant and unique a creative mind as I thought…)

I wouldn’t say the mystery of The Lake House gripped me – I was more mildly curious about how it would turn out. I wouldn’t have cancelled plans to stay at home reading, but I wasn’t ever inclined to abandon it either. The ending was satisfying, and I didn’t guess the “truth” of it a hundred pages in (and thank goodness for that, or forcing myself through the remaining five hundred pages would have been a real slog). I did find the big reveal to be a bit of a set-up, though, as though Morton was just wallopping the reader with a very heavy-handed reminder that all mothers deeply, truly, no-matter-what love their children, and blood is thicker than water and all of that. Still, the ending is very neat, and it ties up all of the loose ends. As nice as it was to vacation in Lady Land for a while, I’ll happily confess that my favourite character was actually Edwina, the golden retriever. She was the one I connected with most of all. Make of that what you will.

My favourite Amazon reviews of The Lake House:

In Search Of Diverse Books: Why We Should All Have A Diverse Reading List