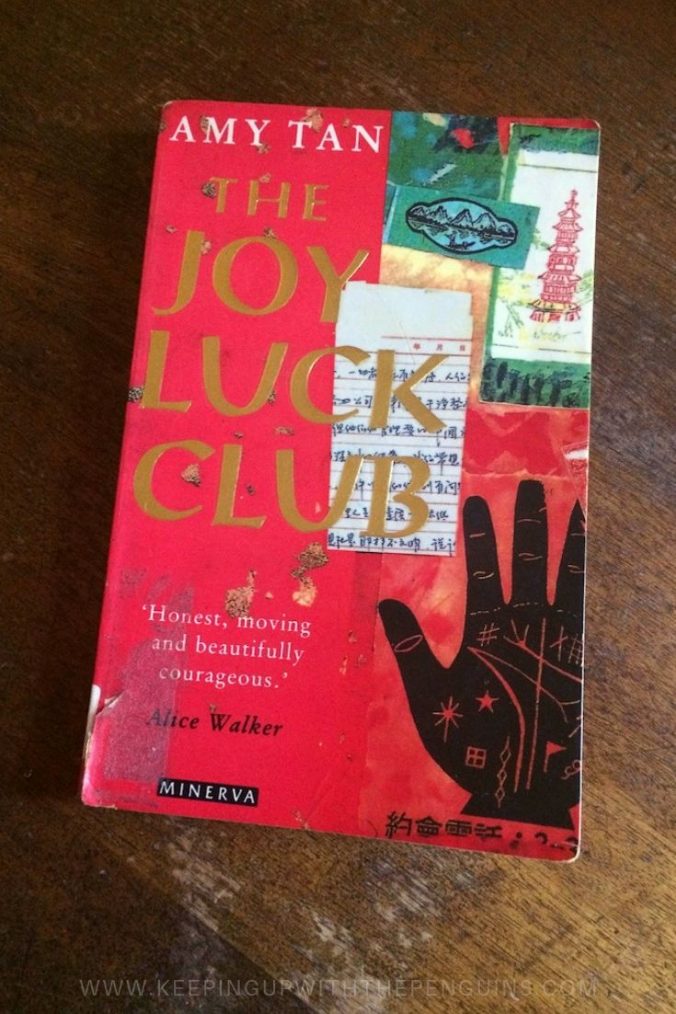 Do you know how to play mahjong? I don’t, but I can tell you that The Joy Luck Club is structured similarly to the game, four parts with four chapters apiece to create sixteen interlocking stories. Granted, I only know that because I looked it up, but it’s a start, wouldn’t you say?

The stories revolve around eight women: four Chinese mothers, and their four American(ised) daughters. These immigrant families all came, from their various points of origin, to San Francisco, where they met at the First Chinese Baptist Church. Suyuan Woo is the founding member of what they call The Joy Luck Club (for which the book gets its name). It’s a regular appointment to play mahjong, feast on good food, share stories and celebrate being alive (and, later, play the stockmarket).

In the first section, we learn that Suyuan Woo has sadly passed away, and her daughter Jing-Mei Woo is taking her place at the mahjong table. She was once the wife of an officer, forced to flee her Kweilin home during WWII and abandon her twin daughters along the way. The three other mothers in The Joy Luck Club have equally sad stories. They’re all around the same theme, too: life is hard, tradition is good (except when it sucks), and kids are ungrateful.

The only narrative propulsion throughout The Joy Luck Club, really, is Jing-Mei Woo’s attempt to find the twin daughters her mother was forced to abandon decades prior. The other ladies of the club had a letter confirming that they were alive and safe, but they don’t yet know that their mother is dead.

So, eight stories, for each of the eight women. It was hard to place the stories as you were reading them. Aside from the respective character’s name at the beginning of “their” chapter, I found myself relying heavily on context clues to work out when and where each story was taking place (and how it connected to the other stories in The Joy Luck Club, though I’ll happily admit that sometimes that thread eluded me).

I won’t pretend to be any kind of expert on China (or Chinese culture, Chinese language, Chinese tradition, the Chinese diaspora, Chinese medicine, or even Chinese food), so all I’m relying on is my gut feeling in saying this… but the stories in The Joy Luck Club felt OFF, in the way Tan depicted them. I struggle to put my finger on exactly why, but something about the characters and their lives on the page just didn’t feel authentic.

I read, after finishing the book, that although The Joy Luck Club sold well and was very popular with many readers, there were a number of critics who reproached Tan for perpetuating racist stereotypes about Chinese Americans. Frank Chin, one of the pioneers of Chinese American literature, attributed The Joy Luck Club‘s popularity to this pandering approach; according to him, depicting Chinese culture as “backwards, cruel, and misogynistic” guaranteed that the book would be received well by mainstream America. He also criticised Tan’s invention of Chinese “folk tales” for the book, calling them “Confucian culture as seen through the interchangeable Chinese/Japanese/Korean/Vietnamese mix (depending which is the yellow enemy of the moment) of Hollywood”. Zing!

The mother/daughter relationships are well fleshed out, though – complex and multifaceted, an impression enhanced by the alternating generational accounts in the book’s structure. It’s a commendable representation of the search for identity and inherited trauma. Critics praised this aspect of The Joy Luck Club, with Nancy Willard saying: “Amy Tan’s special accomplishment in this novel is not her ability to show us how mothers and daughters hurt each other, but how they ultimately forgive each other.”

And, ultimately, I liked the philosophy of the club itself, the Joy Luck Club – making a space in one’s life to be deliberately, determinedly happy, even when the world is falling to shit. We could all use a bit of that, couldn’t we? Unfortunately, the titular club only really appears in the first couple of chapters of The Joy Luck Club; it’s barely mentioned after that.

All told, The Joy Luck Club wasn’t really what I was expecting. It was fine, I’m sure some find it deep and impactful, but it’s not one I’ll be thrusting into your hands or re-reading myself. In fact, I think reading the opening chapter as a short story by itself would make it much more powerful, so maybe give that a go instead.

My favourite Amazon reviews of The Joy Luck Club:

This All Come Back Now – Mykaela Saunders