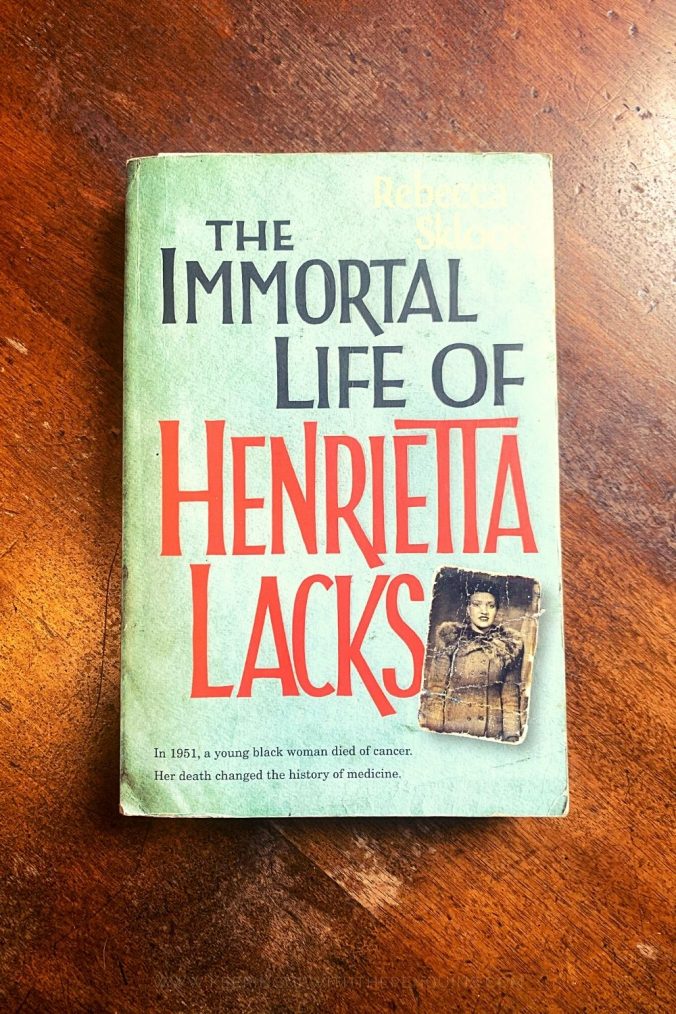 To call The Immortal Life Of Henrietta Lacks a ‘biography’ feels reductive. This 2010 masterpiece of journalistic non-fiction, by first-time American writer Rebecca Skloot, is much more than the dates and facts of a life. It’s a study of bioethics, a masterclass in accessible science writing, and a testament to the human consequences of scientific discovery. And it’s compelling as heck, to boot!

For those of us unfamiliar with the life of Henrietta Lacks (which I’d imagine is most of us, if you haven’t read this book yet), here’s the run-down. Henrietta Lacks was a poor, black, Southern tobacco farmer, still working the land upon which her ancestors were enslaved. She sadly developed cervical cancer in the prime of her life. While undergoing treatment at John Hopkins, her cancer cells were taken – without her knowledge – and used to create the first ever “immortal” human tissue grown in culture.

Don’t worry if you don’t understand exactly what that means: Skloot explains it, a couple of times over, the for-dummies version that even people who hated high-school biology can comprehend.

Basically, before Henrietta’s cancer cells were stuck in a test tube, scientists didn’t know how to make cells grow outside of the human body. They’d stick them in some jelly, wait a bit, and watch them die off, time and again. Henrietta was just one in a long, long, long(!) line of patients whose cells were harvested to see if they might grow – but hers were the first that did.

That’s incredible enough on its own – they took cells out of her body and the cells kept growing – but it’s just the beginning. Henrietta’s cancer cells (now known in scientific circles as HeLa, taken from the first two letters of her first name and surname) are – as the title of this book suggests – immortal. They’re still growing today, even though Henrietta has been dead for seventy-plus years.

So, the immortality isn’t (just) metaphorical: there are literally trillions of living HeLa cells in laboratories all around the world, as you read this right now. According to Skloot, if you could put all of the HeLa cells ever grown onto a scale, they’d weigh 50 million metric tonnes (that’s 100 Empire State Buildings).

The skeptical among you might be wondering: so what? We grew a bunch of cells from a lady? Why should that matter?

Well, for lots of reasons. The ability to grow human cells – Henrietta’s cells – in culture has allowed us to develop all kinds of medical advancements that would have otherwise (probably) never come to be. The polio vaccine, cancer treatments, the effects of radiation, in-vitro fertilisation, gene mapping – all of it was tested first, or developed using, HeLa cells. It’s no stretch to call Henrietta Lacks’s cells the most important tool in modern medicine.

And yet, through a bizarre and tragic series of events, most people have no idea who she is. Rebecca Skloot only heard about her by chance, when a biology teacher mentioned her in a class. Skloot followed her nose, learned everything she could and went searching for more – that research became The Immortal Life Of Henrietta Lacks, the definitive true story of one of the most important women the world doesn’t know.

Henrietta’s own family knew nothing of her “immortal” cell line until two decades after her death. Even though their matriarch’s cells have become a multi-million dollar industry, they can’t afford health insurance. They’ve been screwed by journalists, con-men, and the doctors they were supposed to trust. So, The Immortal Life Of Henrietta Lacks is just as much a study of bioethics and law as it is the story of the woman before the cells.

(Hot tip: don’t skip the Afterword! It offers fascinating insight into the current-ish state of human tissue research, regarding collection, consent, and commercialisation. I was shocked to learn that what happened to Henrietta and her family could quite easily, and legally, still happen today!)

The Immortal Life Of Henrietta Lacks is very just-one-more-chapter-y. Skloot doesn’t rely on gimmicks or cliffhangers; the real story is enticing enough to have you wondering what will happen next (in Henrietta’s life, and in Skloot’s quest to learn about it) all on its own. Henrietta’s legacy – her cells, her life, and what the medical field did to her family – is profoundly sad, but also moving and powerful. Skloot has done a great thing in bringing it to the world.

The critics agree: not long after its release, The Immortal Life Of Henrietta Lacks was named one of the best books of the year by over sixty different media outlets, including the New York Times, NPR, and Oprah. Over a decade later, it is still required or recommended reading at over a hundred universities, and widely taught in classrooms at all levels.

I’m sure you can tell, by this point, that I loved The Immortal Life Of Henrietta Lacks and I highly recommend it – especially to fans of Susan Orlean and John Safran.

My favourite Amazon reviews of The Immortal Life Of Henrietta Lacks: