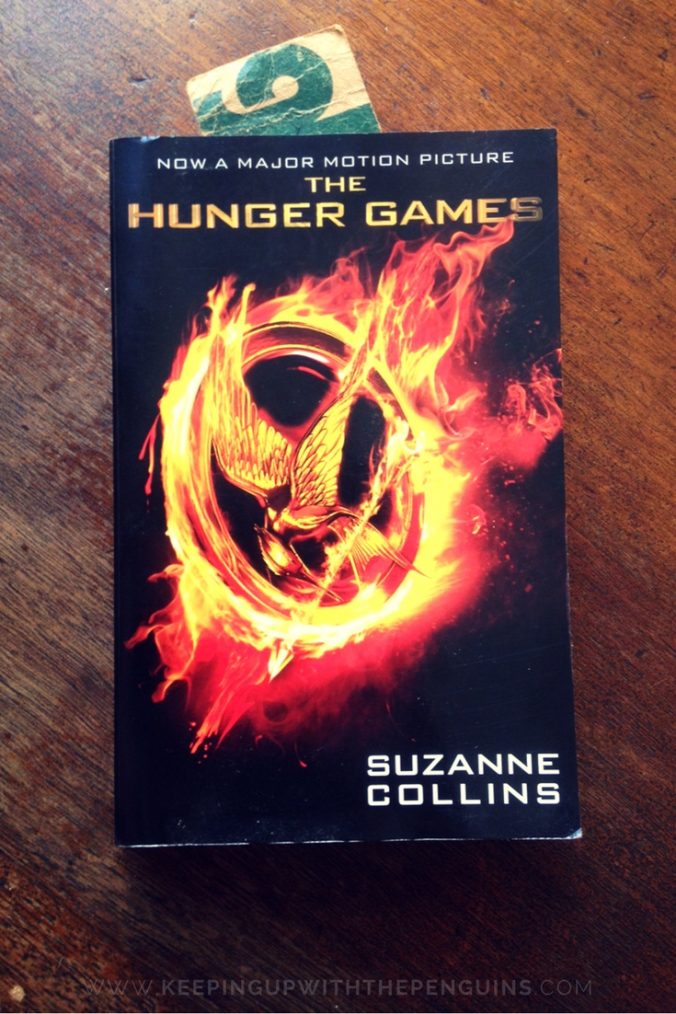 And here we are! If you’re new to Keeping Up With The Penguins, you might need to check out the About page to work out… well, what this is all about.

This is the first cab off the rank, the book that finally got me using my commute for something other than reading work emails and tagging friends in memes on Facebook. I started with The Hunger Games simply because I already owned it; a few years ago, I picked up at a Big W for the princely sum of $2.37… and then never looked at it again. Until now.

Released in 2008, The Hunger Games is a New York Times bestseller, and the first in a trilogy of young adult dystopian novels (and it’s definitely the only book to which that sentence could ever apply, right?). Also, I don’t know if you’ve heard, but they made a few movies out of it.

To summarise the plot and get that out of the way quickly, in a post-apocalyptic North America, a wealthy evil dictator makes each of the poverty-stricken districts surrounding a luxe capital supply a boy and girl once a year to fight to the death in a reality TV show. Winners get spoils and riches (like food, and not-dying). The social commentary is probably a revelation to the teenaged target market, and has already been discussed at length elsewhere I’m sure (in many a high school book report, at least).

Collins famously said that modern reality television served as a source of inspiration (clearly referring to The Bachelor). She recounted an almost-too-good-to-be-true story of channel surfing and flicking between scenes of people competing for a prize, and footage of the Iraq war. It’s not the most believable origin story (J.K. Rowling had the idea for Harry Potter while staring out the window of a delayed train and watching cows in a field, after all), but it’s nice and neat, isn’t it?

The story begins with the narrator – Katniss, the very-average-teen-girl-who-is-very-obviously-going-to-have-greatness-thrust-upon-her – insisting that “there’s nothing romantic between her and Gale”. Ergo, there’s definitely going to be something romantic between her and Gale before the credits roll. Sure enough, by page 453, it’s all “I can’t explain how things are with Gale, because I don’t know myself”. HA!

As it goes on, I literally laughed out loud on several occasions at the characters’ nonchalant descriptions of rather graphic violence. I’m kicking myself for not writing down an example (and too lazy to go back searching for one), but it’d be something to the effect of: “Oh, that guy? Yeah, the other guy beat his head in with a shovel, so he’s no problem *shrugs*”. I know it’s a comment on our culture’s desensitisation to brutality (particularly that inflicted on or by people of colour), and how it’s all perpetuated by the 24-hour news cycle… but it was also really funny. Other highlights included the narrator’s repeated descriptions of delicious lamb stew on rice, which were enough to trigger an intense craving in this reader.

The story ends on a glorious cliffhanger – which, in the age of dime-a-dozen young adult trilogies, we all know means $$$. I can just imagine Collins putting an early draft – with a more resolute ending – on her editor’s desk, and getting an immediate “nuh-uh”. The Hunger Games would have stood perfectly well on its own, with a few tweaks in the final pages, but who cares about “perfectly well” when there’s a goldmine to be dug in the pockets of millennials?

My impressions of the book were definitely coloured by the film – and, in an unexpected plot twist, I actually thought the film was better. It was somehow more complex, perhaps because the viewers weren’t exposed to the keep-it-simple-stupid train of thought of a teenage girl narrator. The film had a subtlety that you just can’t get when the protagonist is spoon-feeding to you her every supposition.

On the whole, I think I enjoyed it, in a way that makes me sound (and feel!) like a condescending arsehole. I had a few chuckles. I didn’t get lost or confused (though the plot did randomly accelerate in places). It was light enough to ease me into this whole project without making me regret the idea entirely.

I probably wouldn’t read The Hunger Games again, but I’d happily give my copy to a 13-year-old cousin who needed something to do on her Christmas holidays.

My favourite Amazon reviews of The Hunger Games: