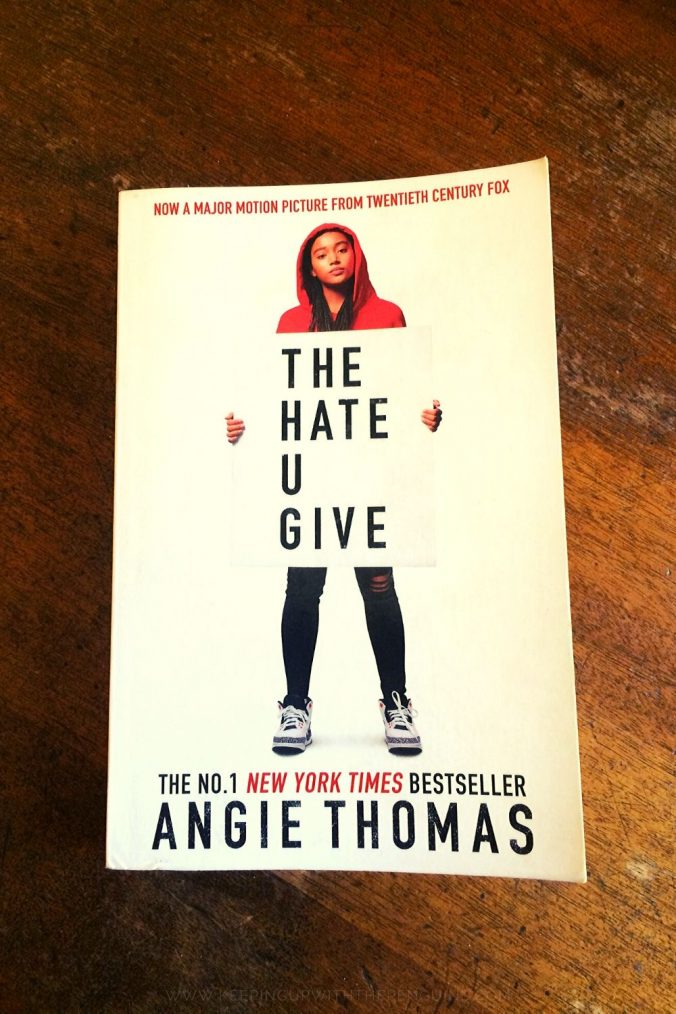 The Hate U Give – Angie Thomas

The Hate U Give by Angie Thomas was one of the most-frequently banned and challenged books in the year it was released, according to the American Library Association. Why? Officially, for its profanity, vulgarity, and references to drug use. But, unofficially, it’s hard to imagine that it’s for any reason other than it might stoke the fire of young would-be Black Lives Matter activists in the tinderbox that is the United States. This is a story about the human cost of racially-motivated police brutality.

This is Thomas’s debut novel, an expanded version of a short story she wrote in response to the death of Oscar Grant. It’s shelved and marketed as a young adult novel – given that it features a teen protagonist who, one could argue, “comes of age” – but The Hate U Give would be appealing and accessible to readers of all ages. We all have something to learn from this story.

It opens at a party, where our main character – Starr Carter – is feeling awkward and uncomfortable. Even though the party is thrown in her neighbourhood by people roughly her own age, she doesn’t feel like she “fits in”, mostly (it would seem) because she attends Williamson, a “white-people” high school. When shots are fired, her friend Khalil helps her escape, and they drive away to safety in his car… or so they think.

Khalil is pulled over, and after a short interaction, the police officer shoots him. Starr is the only witness to Khalil’s death. The officer keeps his gun trained on her until back-up arrives.

That might sound like a story in and of itself, but really it’s only the beginning of The Hate U Give. The story actually unfolds around what Starr decides to do next. Should she make a statement to police and prosecutors, knowing it might cause trouble for her family? Should she identify herself as the witness among her friends and neighbours, knowing that it might incite the ire of local gang members? She’s stuck between the proverbial rock and hard place, an impossible decision for anyone to make, let alone a sixteen-year-old girl. Chuck into the mix a racist frenemy, a white boyfriend who doesn’t get it, and the ripple effects of drug addiction and gang violence in her neighbourhood… Unsurprisingly, Starr struggles under the weight of what is right and what is safe.

“I’ve tweeted RIP hashtags, reblogged pictures on Tumblr, and signed every petition out there. I always said that if I saw it happen to somebody, I would have the loudest voice, making sure the world knew what went down. Now I am that person, and I’m too afraid to speak.”

The Hate U Give is a call to action in the form of a young-adult novel. Its central message is reflected in its title, which is actually a reference to an idea attributed to Tupac: that THUG LIFE actually stands for “The hate u give little infants fucks everybody”. In other words, raising children – of all colours and creeds – in a racist system that only functions on the back of oppression is good for no one. Or, to borrow an older saying, we reap what we sow.

In the Author’s Note following the novel’s conclusion, Thomas describes the first time she saw a photo of Emmett Till. She managed to convince herself that it was “history”, until she saw the video of Oscar Grant. This triggered a series of difficult conversations and revelations for her, and “from all of those questions and emotions, The Hate U Give was born”. She emphasises that her motivation for writing the novel was the opportunity to give young people the reassurance that they are not alone in their frustration, fear, and sadness. I like to think that it’s not just “young people” Thomas is speaking to anymore, because surely after the events of this year (if nothing else), that frustration, fear, and sadness is felt by all.

The presence of Chris – Starr’s white boyfriend – in the novel is a deft touch, one that kindly guides white readers towards understanding the role we have to play in making change happen. The Hate U Give also serves the dual role of guidebook and mirror, with Starr’s code-switching reflecting the lived reality of many readers while revealing it to others who haven’t experienced it for themselves. Characters like Starr – and her brothers, her father, and mother – are too often caricatured in fiction. It was a relief to read such a complex and nuanced depiction of them, and the politics of their communities.

It’s both amazing and saddening that The Hate U Give is still so resonant and relevant, perhaps even more so than when it was initially published. The film adaptation – released in 2018 – has also gone on to receive popular and critical acclaim. And so I circle back around to where I began: it’s hard to imagine that this book could be banned for any reason other than systemic racism. I feel a nervous flutter in my stomach as I type that, and I’m tempted to backspace over it, but if Starr can find the strength to use her voice then so can I.

My favourite Amazon reviews of The Hate U Give: